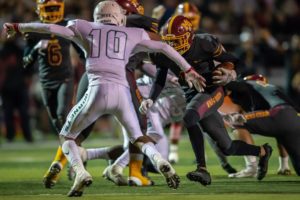 The Bears break through the Hornets’ defense.

On the cold night of December 15th, M-A football made its final victory to become the state champions in the 3-AA Division at nearby Sequoia High School. This 2018 season added a new chapter to M-A’s history books, especially sweet since the Bears fell in this very game two years ago.

During the first quarter the Bears were down 0-7 after Lincoln’s Jamahd Monroe scored a touchdown and extra point at 8 minutes and 52 seconds. The Bears fought the rest of the quarter to bring up the score with running plays by quarterback Justin Anderson and running back Deston Hawkins, but were unsuccessful.

“Going into the game, it was going to take time to adjust to their speed… those guys are fast,” head coach Adhir Ravipati told the San Jose Mercury News, adding that it was “a great performance by our defense” to only let in one touchdown in the beginning. 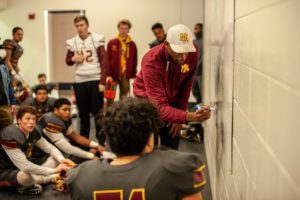 Head coach Adhir Ravipati reviews with his team at halftime.

Early in the second quarter, Lincoln quarterback Christopher Davila repeatedly fumbled due to the Bears’ tough defense. Davila was injured during one of the fumbles, which left Lincoln at a disadvantage. Four minutes into the quarter, Hawkins scored after breaking through the Hornets’ defense, tying the score at 7-7. The Bears’ defense remained strong as Grant Henry brought down a Hornets receiver, one of several turnovers. With 5:44 remaining in the quarter, the Bears scored again when Malik Johnson received a legendary pass at the 5 yard line and scored again, bringing the score to 14-7. The Hornets used several timeouts to try and recover, but could not match the Bears. 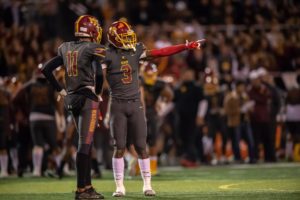 Troy Franklin (#11) and Malik Johnson (#3) confer during the third quarter.

After the halfway mark the game became dirty, spurred on by the chanting crowds. The Bears’ consistent offense against the Hornets enraged the opponents during the third quarter, causing players to grab each other and forcing the referees to declare holding calls.

In the final quarter, Lincoln fans were nervous as M-A came closer to a decisive victory. With a minute left, M-A’s Daniel Heimuli intercepted an open pass at the 42 yard line. The Hornets trailed 7 to 21. With 30 seconds left, tension on the field heightened and referees pulled apart players. Despite numerous commands from the loudspeaker to stay off the field after the game, M-A fans began to storm the field before the clock ran out.

“As long as I left all on the field, that’s all that matter to me,” Hawkins told the  San Jose Mercury News. He transferred to M-A from Serra High School last year. “And to end my senior year… with a state championship, it feels great.” 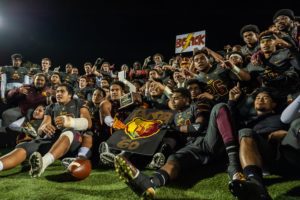 The team celebrates a hard-won victory.

“My favorite part besides winning is just seeing all my brothers play the game we love, and having fun while doing it,” said Anderson. “It means a lot to make it to a state championship game! It’s not often you can play for a state title so it feels real good.”

“This is a high school dream for a football player,” said senior Noa Ngalu, to the San Jose Mercury News. He will be continuing his football career next year at the University of Washington.

Lincoln’s head coach David Dunn said, “I knew that in my heart, that from day one, it would be an emotional roller coaster.”