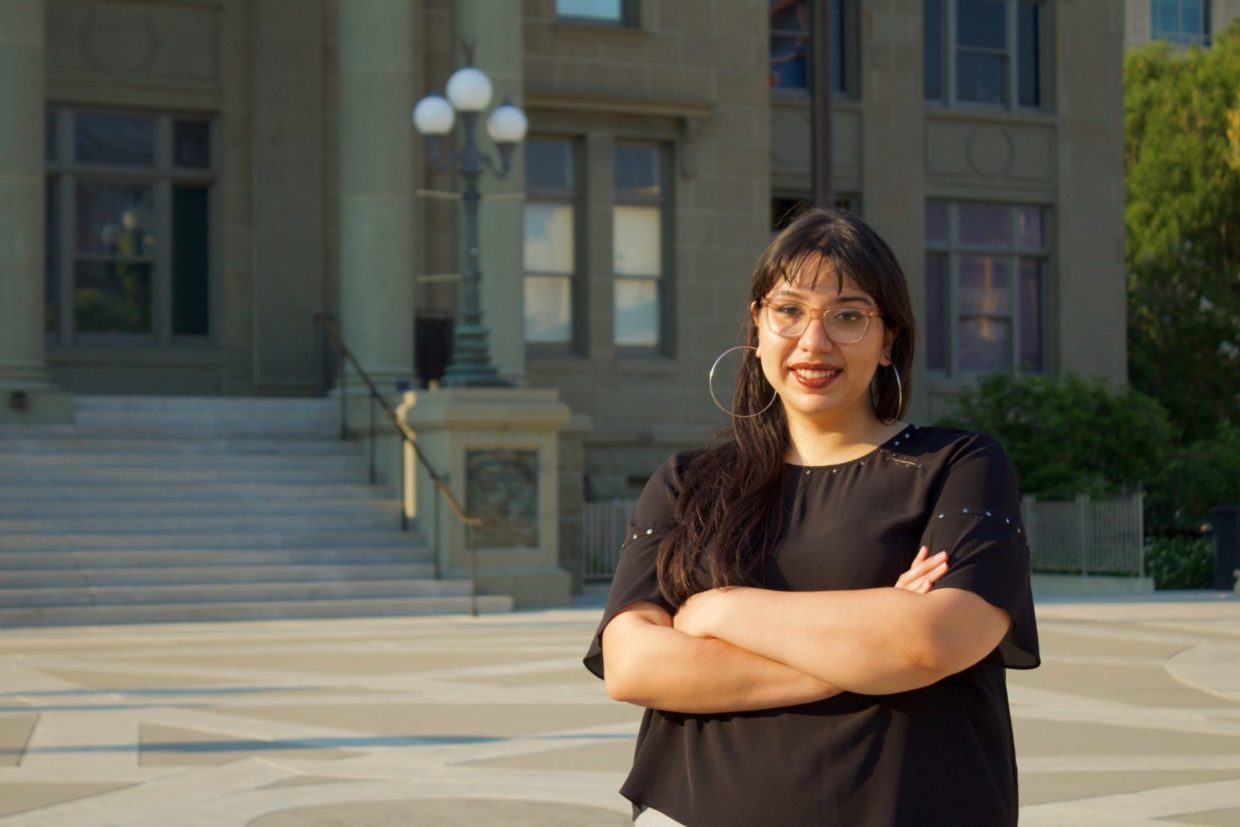 Lissette Espinoza-Garnica ‘14 is a Menlo-Atherton alumni who is running to represent District 3 on the Redwood City Council. They recently sat down with the M-A Chronicle for an interview about their experience at M-A, opinions of the current City Council, and their plans to change how District 3 is run.

What motivated you to run for Redwood City Council?

I decided to run after I saw in the summer City Council was not listening to a lot of organizers’ demands for change in the city. After the George Floyd protests amassed about 3,000 people, Redwood City made what I would say were performative shows of solidarity and did not at all try to defund the police, even though it was most requested from the community. Behind Black Lives Matter, the organization itself, is the demand for abolition and defunding the police.

Overall, there is a lot of posturing of being an ally with the community and the vulnerable. And as someone who is a first-generation queer, non-binary Chicanx who was born and raised here in District 3 or North Fair Oaks, I feel I am a very qualified candidate for this, someone who is going to center our marginalized people—folks who are renters, low-income families, people of color—as it is a minority-majority district.

How would you describe Redwood City Council’s performance right now?

We recently had a study session on community dialogue and I would say City Council is pretty tone deaf and removed from what the community is asking for. There were many concerns myself and other residents raised during the study session about how the list of eight items at the ad hoc committee on policing does not at all incorporate defunding and descoping when it was the most popular demand in these equity sessions.

Moreover, after receiving the Stanford PCRC research staff report on Mid-Peninsula cities, it is clear police reform is not an answer. The research reports that there is no real evidence sufficient to say deescalation training works. Also, there are many cons to police oversight committees because the community does not have any subpoena power or sway in general over the council and the way police are reprimanded. The report recommended that not just Redwood City, but Mid-Peninsula cities descope and end traces of law enforcement.

All of this language is to say that the community and even research reports say no amount of reform could make it where we have 0% police brutality. There is no way of reforming the police into a system that helps navigate issues such as poverty and homelessness, which police officers often respond to when it should be licensed clinician care workers, et cetera.

They are stuck in their own ways, status quo, and not trying to defund the police, even after the research that they requested themselves says City Council ought to and that the methods they use right now are proven not to work.

Can you describe the ethnic studies program you organized for Menlo-Atherton High School?

I created the Ethnic Studies program right after I graduated in 2014. While in college, I saw a post on Facebook by the Sixth Man Club at Menlo-Atherton for an upcoming basketball game. The theme was Ghetto Night and they made an entire Facebook page to get people excited for the event. Non-black people made posts, writing things like, “get your durags and get your wife beaters out because it’s time to get ghetto,” with photos of Black people holding guns and stuff like that.

We wrote to the principal, and after that I began pushing for ethnic studies. My friend, Dana Rust, and I created a petition which garnered a lot of signatures. We spoke out at Sequoia Union High School District meetings and suggested ethnic studies as a path for healing or rectifying these issues. Overall, M-A does not have very good retention of teachers of color nor any courses culturally relevant to folks not from European backgrounds.

I thought ethnic studies was essential because students were going to continue to terrorize students of color with these events due to lack of social awareness. The school decided on a teacher who did not fit the qualifications based off the course from Cañada College which were that they had to be a person of color and have a degree in history. Although the class was not up to par, I thought that was a good stepping stone.

Hopefully this is something that gets better with student engagement and more teacher diversity, which is something I am trying to ensure. Because of the exorbitant living costs here, we cannot retain quality teachers, especially teachers of color. I hope to make public housing and institute a voucher program. My platform is securing housing for all; if you work in Redwood city, you are able to live in Redwood city. Far too many people must live outside of Redwood City and commute here. That should not be the case, especially if you want firefighters, teachers, caregivers who are supposed to be essential in the community. Everything intersects, and I hope the program improves.

What do you believe makes you the best candidate for District 3?

I believe I am the best candidate because I am someone who is very knowledgeable and knowledgeable about colonialism and its impacts on us today. It has through the forms of gentrification and the police who are a form of former slave patrols. So with my lens, I am very conscientious of that. My platform includes defunding the police, the $48.9 million we have right now, and investing in community resources, for example, community-based gardens, farms or food banks. I would ensure there are lawyers and caseworkers as well as professional mental health workers and EMT onsite to be first responders. Police only arrest 5% of severe cases—the rest of which are petty crimes like loitering, shoplifting, vandalism, et cetera. You can attribute a lot of crime reduction—three quarters of it—to having more resources.

I acknowledged the America’s foundation that is colonialism, slavery and imperialism. My approach is finding solutions that are about healing beyond the carceral. No one is illegal on this land because it is all stolen. I believe our community needs city-funded legal services especially for our undocumented people to obtain legal residency in the country. We should also have community land trusts and programs that give land back to natives. There are examples of this in the East Bay of community land trusts being stewarded by indigenous Ohlone women.

When I say colonial structures, I also mean capitalists. Our council is still very capitalist because you can see that while the current incumbent agrees we need more affordable housing, 15% of affordable housing, which is what the city allots, is not enough. My principle is you have to house everyone. We should not have homeless people. We ought to invest in public housing because it is not at the market rate. The incumbent is someone who has said publicly, “I may be White privilege, but I wasn’t raised White privilege.” So, she does not understand her racial privilege as a white woman and homeowner to really address issues surrounding class gentrification and policing to provide adequate care. Majority of people in District 3 are renters. Majority of people are low income and very low-income making around 50K a year.

In light of the pandemic, what are some things you would do as councilmember?

I am a caregiver and also part of the FCIU 2015. The president of that union spoke out about how many caregivers must make makeshift Personal Protective Equipment (PPE) using rags and raincoats. People are spending their own money to get the protection they should have been offered at work the moment COVID started. I believe that the folks working as essential workers right now ought to be given hazard pay and PPE. Also, I think there should be rapid retesting because currently you do not get tested unless there are symptoms showing. There should be testing on site available for anyone who wants one.

My initiative would also have to be a partnership with the County IC because the County is currently publishing data on COVID. However, it only does it by like city population, whereas we need to get to the point where we trace it by race and zip code, because you can tell by those factors, it disproportionately affects the Black and Brown community. So with that kind of contact tracing, we will be able to get a better hold over a COVID and make sure everyone is safe while also addressing the systemic disparities between people from different socioeconomic backgrounds

Lastly, right now the city council is only making more office spaces during COVID for people who are high earning tech workers and not unionized. I want to protect unions and renters by extending the moratorium that we have going on and also ensuring that no one is evicted because of inability to pay during COVID. The two and two are not exactly the same—having a moratorium does not mean you will not be evicted eventually.