On February 3, Outlet, a local LGBT+ youth support group, hosted an art showcase and workshop, in collaboration with the LGBTQ Youth Space and the Young Men’s Christian Association (YMCA). The showcase took place at the Palo Alto Family YMCA from 6 to 9 p.m.

The showcase, playfully titled “New Year, Who Dis?” featured artwork created by local LGBT+ youth, focusing on the theme of aspirations for the future and this coming year.

Austin Webb, a 15-year-old student from San Jose, submitted his art piece, “Emergence,” to the showcase. 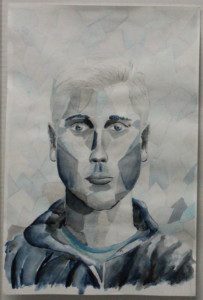 Webb began seriously focusing on his art two years ago and says that the piece was inspired by a poem about being gay and Mormon that resonated with him.

“When I’m making a piece that is more personal, absolutely my identity goes into it,” Webb said. “Especially with the piece I brought tonight, sometimes the pain or even inconveniences I face can go into my art.”

In terms of why art is important for LGBT+ youth, Webb added, “I think that sometimes you can really bottle up your emotions and by letting them out you can really relieve some of those negative feelings and even help other people know how you feel.”

One of the organizers of the event, Gilbert Gammad, who is the Program Coordinator for Outlet, shared similar experiences with art as a means of expressing themselves and releasing emotions. 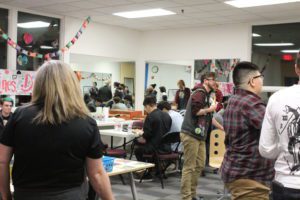 Attendees mingle and work on their tattoo designs.

The showcase, which is the first of its kind that Outlet has organized, was in part inspired by Gammad’s experiences with the queer community in college.

“I was involved with a lot of queer activism… and a lot of the things that we did were centered around art,” they said.

“Art is so much more accessible and so much more meaningful and easier to understand than having someone lecture at you about their experiences.”

Gammad also explained that “having this sort of art showcase, especially for the queer community, is a cute way to help folks see the arts as something that’s useful for them or like a different way of processing through the guilt, the bullying, the shaming, or even just processing the happiness they might have.”

In this sense, art can be a way for queer youth to communicate thoughts and emotions they might not feel comfortable expressing elsewhere.

Attendees browsed the art, mingled, or ate snacks until about 6:30 p.m. when two queer and trans tattoo artists gave a talk about their experiences with tattooing and the importance of art for them. 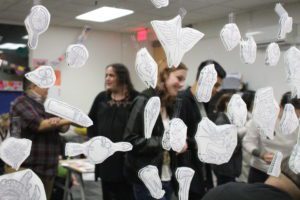 Temporary tattoo designs by the artists were taped to the wall for people to choose from.

One of the artists, Ben O’Hara, always loved drawing and began creating tattoo designs for other people when they were growing up in group homes.

“When I turned 18, I brought in my sketchbook to a tattoo shop and basically just bugged them until they hired me,” O’Hara laughed.

Although O’Hara admitted that the first shop they worked at was a hostile environment for queer people, as their career progressed, they were able to find a group of accepting clientele and colleagues.

One thing O’Hara loves about tattoo art is that it “brings people together … you can put out there [on your body] what’s important to you and share things about yourself to people without having to actually meet them.” 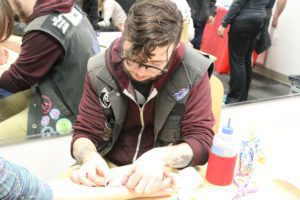 Ben O’Hara gives a temporary tattoo to an attendee.

Like Gammad and Webb, O’Hara believes that “it’s good [for LGBT+ youth] to have more than one way to be able to express how [they’re] feeling.”

O’Hara added that “for youth in general, I think people don’t listen as much as they should, and having an outlet, an alternative method of communication, [to express] yourself is really important.”

Organizers also provided art supplies and cardboard for guests to make political signs for any upcoming protests they might attend.

The atmosphere was laid-back and amicable, with attendees painting, chatting, and playing music. Most were youth themselves but a few parents and a handful of adult organizers were also present.

Gammad summed up the importance of spaces and events like these for the LGBT+ community by saying, “I think art can be a really unique and cool way to meet other folks, exchange ideas, and create friendships with folks.”

By coming together through art, LGBT+ youth can express their emotions, build community, and find solace. 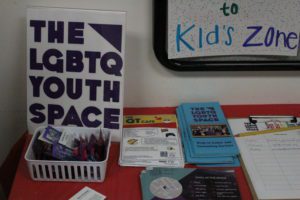 Condoms and flyers were available for guests.

Outlet provides support groups, resources, and counseling for LGBT+ youth. Its main office is in Redwood City but also has groups in Mountain View and San Mateo.

The LGBTQ Youth Space is located in San Jose. It will be hosting a sexual harassment and self-care workshop on Friday, February 24.