Juuling at M-A and side effects that students ignore

Co-founded by Adam Bowen and James Monsees in San Francisco, the e-cigarette company JUUL has become widespread among high school students in the past couple years.

JUUL‘s website says, “JUUL is an alternative for adult smokers” yet so many M-A students Juul regularly; 40.6 percent of respondents to our survey said they juul every day. It is seen as more socially acceptable than cigarettes among teenagers. Although the long-term effects of juuling are still unknown, many researchers believe that the most dangerous aspect is the addicting nature of nicotine.

A JUUL cartridge has as much nicotine as an entire pack of cigarettes. Its appearance mirrors that of a USB drive, allowing students to easily hide and charge it without suspicion. Many students juul during class when teachers are not aware due to their inconspicuous nature. 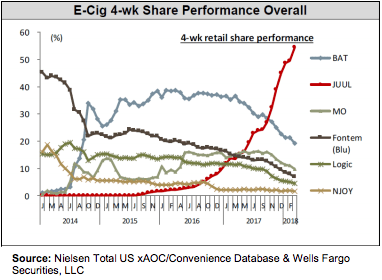 An anonymous M-A student who juuls said, “I think it’s unfortunate that so many kids juul so much. I think it’s important to know how it affects you and the side effects of it, which not a lot of kids know. But, I don’t think it matters too much, kids are just having fun.”

The nonchalant attitude that many students have towards juuling reflects the fact that many people who use JUULs do not care about possible side effects. In a survey of 71 M-A students, 42.3 percent said they had used a JUUL at some point, yet 57.7 percent said they do know the possible side effects. This willful ignorance has led to an exponential growth in the use of e-cigarettes, specifically JUUL.

Some could argue that at least juuling is less harmful than cigarettes because of the lack of tar and carcinogens inhaled. This is true, but in many cases, juuling serves as something that may lead more teens into using other nicotine products in the long run instead of reducing cigarette use. Pediatrician Dr. Harold Farber from Texas Children’s Hospital and chair of the Tobacco Action Committee for the American Thoracic Society said for National Public Radio, “It’s a short jump from there to combustible cigarettes.”