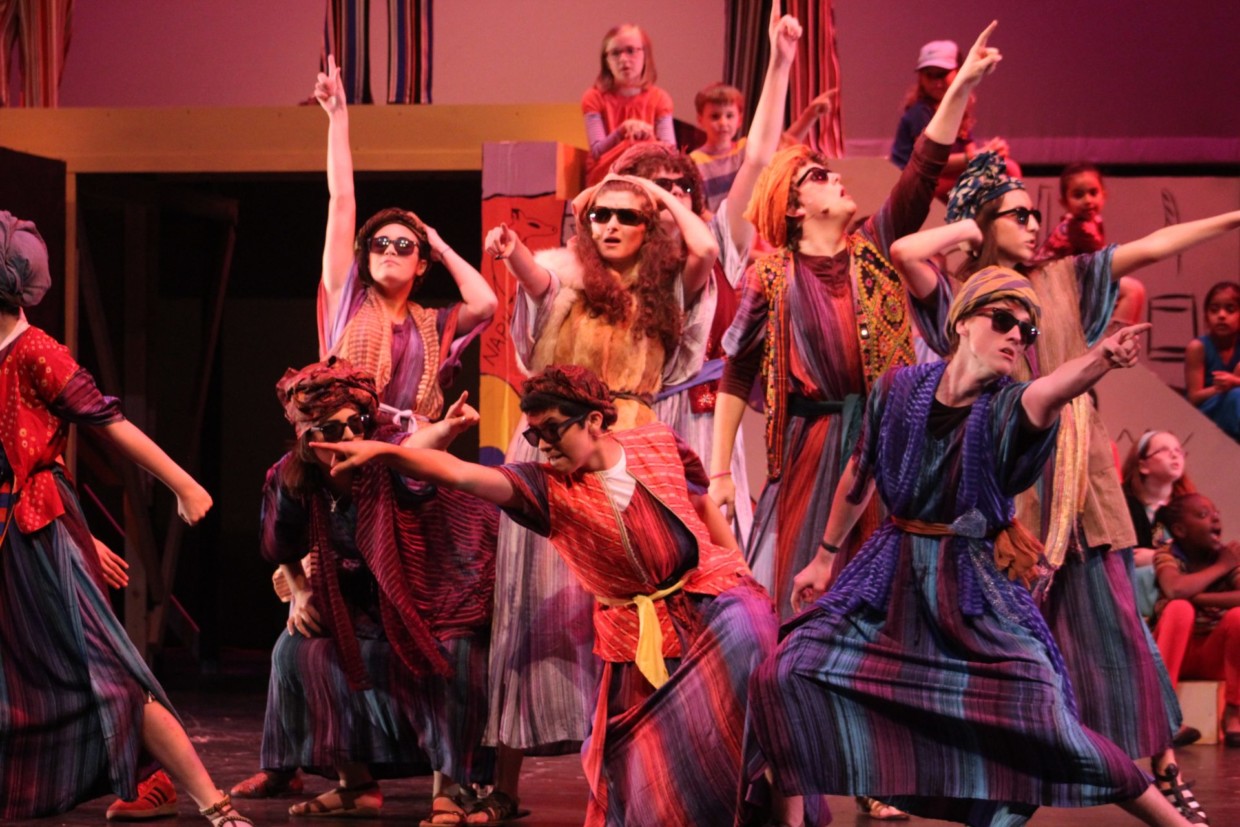 Last night, M-A drama performed its opening show of “Joseph and the Amazing Technicolor Dreamcoat” in the M-A PAC to a full house and roused the audience to a standing ovation by the end of the musical. The production featured colorful costumes, toe-tapping songs, entertaining dances, amusing antics, and a live pit orchestra, which when all put together formed an exciting cohesive experience. 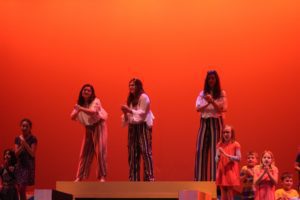 Left to right: Yum, Ornes, and Williams stand at the top of the staircase telling the story of Joseph.

Act I of “Joseph” opens with a lengthy overture played by the pit orchestra that previews some of the songs in the show. After three to four minutes the curtains open to reveal the Encinal children’s choir sitting on stage ready to hear the story of Joseph. Three narrators played by Maria Ornes, Jacey Williams and Karina Yum arrive to tell the kids and the audience the Bible story of Joseph in song. Yum feels right at home in her role because “as an actress, I tell stories, so playing the narrator is kind of like just doing what I normally do but in a more obvious way. I love this role, because to a certain extent, I’m just being myself and telling a really cool story.”

From the beginning, the show is lively and action-packed with Yum even describing it as “the most upbeat show I’ve ever been in.” Soon Joseph, played by Wesley Barker, and his family join the narrators on stage and begin to act out the tale while the narrators continue to recount Joseph’s story. Bringing vitality to the leading role, Barker believes that he and Joseph “relate on the same level of wonder and excitement.” 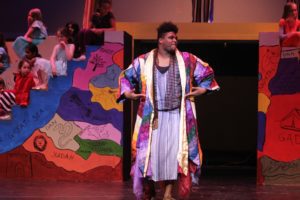 After Joseph’s entrance and address to the kids, the narrators introduce Joseph’s family–his eleven brothers and father– in “Jacob and Sons” which then transitions into the most well-known song of the musical, “Joseph’s Coat.” Joseph’s brothers express clear resentment as they sing about Joseph’s coat and its 29 colors, a clear indicator to them of Jacob’s favoritism of Joseph. Jealous of the attention Joseph commands from Jacob (Louie Leon) and scared of his ability to prophecize events with his dreams, the brothers throw Joseph down a well and sell him into Egyptian slavery.

Next, “One More Angel in Heaven” marks the first major dance number which uses the ensemble to its full capacity. Featuring solos from Fiona Fulton as Reuben and Kelley McCutcheon as a wife, the song shifts between a sad mourning eulogy and a jolly western hoedown depending on whether the brothers’ father Jacob is present–Jacob despairs at Joseph’s apparent death while the brothers and their wives rejoice. 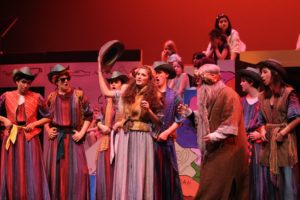 Reuben leads his brothers in consoling Jacob before breaking into dance when Jacob departs.

In Egypt, a wealthy man named Potiphar (Leon) buys Joseph as a servant and puts him to work in his house. Joseph is determined to be a faithful worker for Potiphar but Potiphar’s wife (Izzie Nada) has other plans and attempts to seduce Joseph. Unfortunately for Joseph, Potiphar walks in on them and Potiphar’s wife frames Joseph, sending Potiphar into a fit of rage which he takes out on Joseph by getting him thrown in jail. 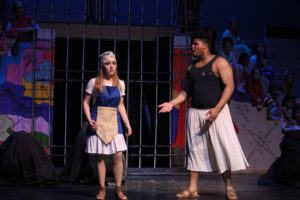 Joseph tells the baker his fate.

As Act I comes to a close, Joseph meets a butler (Elena Maghsoodnia) and a baker (McCutcheon) in prison and listens to their dreams, forecasting what lies ahead for each man: for the butler, he will soon be free and live a prosperous life, and for the butler, his execution. The scene then transitions into an upbeat 70’s-style flash mob, with the ensemble clad in vibrant rainbow shirts and dresses and the children’s choir flooding the aisles of the theater to the tune of “Go, Go, Go Joseph.” The curtains close leaving the audience to wonder about Joseph’s fate (if it isn’t familiar with the Bible story) and anticipate more catchy music and dancing. 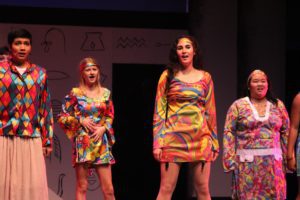 During the intermission, it is advised that you use the restroom as you won’t want to miss any of Act II, or worse, be induced into wetting yourself by the hilarity of the closing act.

The pit orchestra and children’s choir introduce the second act with a short medley of songs from the first act before the curtains open once again. The scene has moved to Pharaoh’s chamber where Pharaoh (Ian S. Peterson) stands high above the rest of the ensemble with his back turned to the audience. A couple guards bring Joseph to Pharaoh, having heard of his prognosticating powers, to explain the meaning behind Pharaoh’s recent dream. 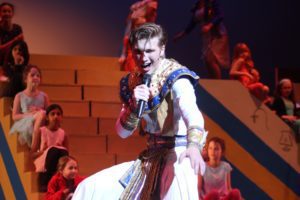 Pharaoh sings his dream to Joseph.

Joseph’s arrival in Pharaoh’s court leads up to one of the main highlights of the show: Peterson’s portrayal of Pharaoh to the likeness of Elvis Presley. During the scene, Pharaoh prances up and down the stage relating his dream to Joseph in 1950’s rock-and-roll before Joseph explains to Pharaohs that his dream indicates seven years of fertility in Egypt followed by seven years of famine. For his services as a seer, Pharaoh makes Joseph his number two and puts him in charge of stocking up food to prepare for the famine.

With Joseph now in a position of prominence, the narrators acknowledge that this would be a fine place for the story to end but remind the audience of Joseph’s family back in Canaan. The brothers, led by Simeon (Michael Pagee), sing a French ballad bemoaning their plight in the midst of the famine and reconsidering their decision to send Joseph off to Egypt. “Those Canaan Days” features French accents, obligatory ad-lib references to French stereotypes, and a waltz between Judah (Ethan Stoneham) and an Apache dancer. 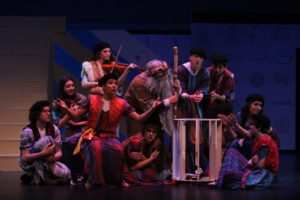 Simeon leads his brothers in lamenting their misfortune since Joseph left.

The brothers conclude that in order to survive, they must journey to Egypt to beg for food and shelter. When they arrive, they find themselves face to face with Pharaoh’s second-in-command, whom they do not yet know is Joseph–Joseph recognizes his brothers, however. They bow before Joseph, groveling for food, and Joseph capitulates but now without testing the brothers. 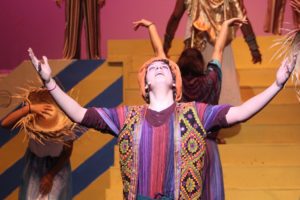 Ordering two men to hand out bags of food to his brothers, Joseph plants a bronze cup in his youngest brother Benjamin’s bag, then accuses one of the brothers of stealing from him. Pretending not to know who has the chalice, Joseph checks Benjamin (Axis Callejas) last and finding him with the cup, calls two guards over to hold him.

The brothers beg Joseph to have mercy on Benjamin and break into song about his innocence led by Judah. “Benjamin Calypso” is yet another wildly entertaining song and dance in which the ensemble adopts a Caribbean tone and dons straw hats to appeal Benjamin’s sentence. Satisfied with what he sees and feeling compassion for his brothers, Joseph reveals himself to them in a scene of jovial resolution.

Everything that follows is merely wrapping up loose ends from this point, with Joseph reuniting with his father and receiving his coat again. The family is happy and reconciled and the ensemble bursts into a megamix of all the songs from the show, while taking its bows. 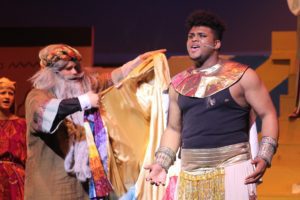 Jacob puts the coat on Joseph.

Overall, “Joseph” is quite entertaining and well worth your time to see both for its whimsical song and dance as well as its underlying messages of “faith, patience, and forgiveness” as Yum explained. For the graduating seniors of M-A drama, specifically Peterson, Nada, McCutcheon, Stoneham, Ornes, Barker, and Livienna Lie, this show was a great sendoff to commemorate their commitment to M-A’s theater program.[slideshow_deploy id=’65480′]

Nada said, “I’m glad to go out with a glorious burst of color and rhinestones, but I am sad to go out… It feels really great to know that in little ways I’ve done my part to help shape my community and there will be little things that I’ve done and helped build that will continue here for a while after I’ve graduated.

McCutcheon echoed this sentiment, saying, “It’s definitely very bitter-sweet… I’ve been doing theater all four years of high school and its given me the opportunity to meet so many incredible people. I’ve grown so much as a result, not only as an actor but as a person and as a leader.”

When you come to see the show, the cast advises you to wear multiple pairs of socks, so they can knock them off:

Yum: “There are 29 colors in Joseph’s coat, so I think a pair for each color would be about right. Extra point if each pair is one of the colors mentioned in the song ‘Joseph’s Coat’.”

Barker: “I would say bring about 25 pairs of socks–one for each song. Each song is so amazing and I can’t wait to share what we’ve been working on with an audience!”

McCutcheon: “[Wear] one for every color in the coat!”

Nada: “Wear 12 pairs of socks, one for each of Jacob’s sons. Or just wear every pair you own, we’ll knock ’em right off.”