Jean Claverie and Ian Peterson, the Hope of M-A

With few parameters on self-promotion, the M-A class president and vice-president campaigns offer students the ability to create and design their campaign as they choose. For years, the struggle and desire to find the wittiest, most entertaining has alluded those running for the class president position—that is, until this year. Current juniors Ian Peterson and Jean Claverie, along with their campaign team and entourage, ran a successful campaign for senior class president and vice-president, highlighting the energetic and comedic energy of their duo. 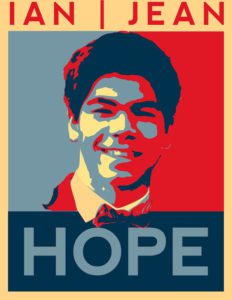 The idea of appropriating the Obama Hope posters by Shepard Fairey stemmed from a collaboration of Claverie and Peterson’s brainstorming. Claverie explained, “I was trying to do something with photoshop, and I wanted to be like one of the Mao posters, us looking over everybody with the Mao background, like the sun beams. I sent it to [Ian] and he was like, ‘Right, that’s alright. We should probably do, like, a satire of the Hope posters.’”

From there, Claverie simply looked up the photoshop tutorial and in ten minutes, a movement was born. 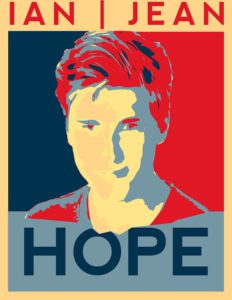 The idea to then expand the Hope posters into other areas, all ending in -ope, occurred from the first dope poster. Claverie added, “We were going to do dope, and just do a bunch of dope posters and that would be it. But then we did cantaloupe, and it kind of snowballed into, ‘Alright let’s go on rhymezone.com.’”

Not only did Claverie and Peterson systematically plaster the M-A walls, but they also planned to expand their campaign. “We also even thought to put [the posters] up around outside of school so people just couldn’t escape the posters so the only reason for people not to vote for us is that we had too many posters,” Peterson mentioned.

In fact, the creative process led the boys and their team to create more than they were able to display in the hallways. “We have a lot of designs that never saw the M-A school walls,” Peterson mentioned.

These never before seen posters are displayed in the slideshow below.

For the Peterson-Claverie team, the major limitation on their campaign process, much like most politicians, proved to be monetary. Their original plan to have Peterson’s father print the posters at work backfired with a technological issue.

“He couldn’t get it to work,” Claverie explained, “so we had to double down.”

This “doubling down” brought Claverie and Peterson to Staples, which, Peterson admited, “cost more money than we’d care to admit.”

The Peterson-Claverie team included more than just the two juniors running. Nik Caryotakis stood in as Campaign Manager, assisted by Andrew Tan. “We had people writing letters to get soap in bathrooms, we had a campaign manager and an assistant to the campaign manager,” Peterson commented.

Peterson and Claverie look forward to serving their class next year. Their platform includes a wide variety of issues at M-A. “Something we’ve picked up more on is the segregation of our school. It’s something I actually really want to fix. We had a bunch of joke things, but I think since we won we have to actually get serious. Some of the joke things were we wanted to get swings on campus. We’ll still look in on the possibility of swings. And then of course the bathrooms are a mess, so we’ll do our best to clean those up,” Peterson elaborated.

While the Peterson-Claverie administration has yet to make their legacy in their roles, they will without a doubt serve as an example to future president and vice-president hopefuls and all students looking to make a poster.