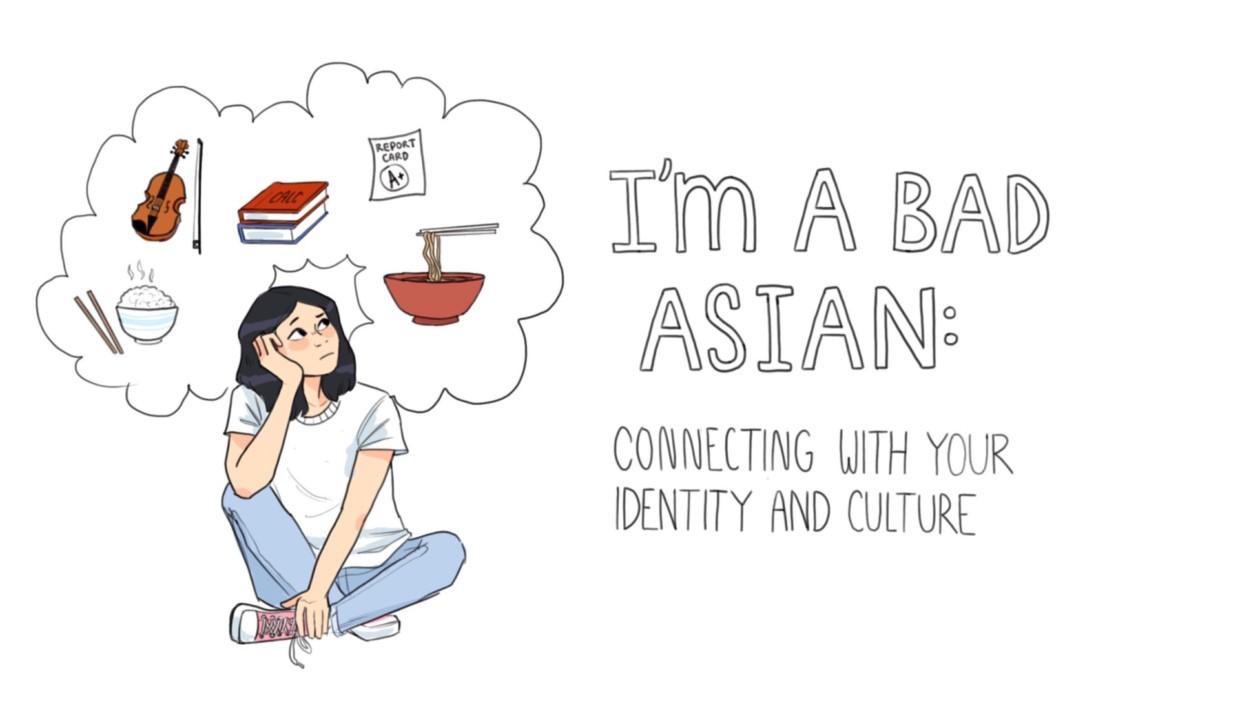 I’m a Bad Asian: Connecting With Your Identity and Culture

“Sushi, noodles, a rice cooker…I’m more Asian than you!” one of my Caucasian friends exclaimed. A few of my friends laughed. I did too. Did that mean that my middle-class, suburban, white friend was more Asian than me? Had growing up in the United States somehow lessened my claim to my Chinese identity?

In 2002, I was left at the gates of a small orphanage in rural Hunan, China. I spent one and a half years in an orphanage, before being adopted and moving to California. I had a new birthday, a new English name, and a passport. For all intents and purposes, I was American, and I joined the exponentially growing masses of Asian Americans — the largest immigrant population with an increase of nearly 72% between 2000 and 2015. Donald Trump and his anti-immigrant rhetoric attack foreigners from our southern borders, but it’s really people like me he should be worried about.

Because of my all-American upbringing, I’ve often been associated with the racist joke of being “a banana”: yellow on the outside, white on the inside. The banana refers to an outwardly Asian appearance, while the “inside” (attitude, culture, language, etc.) is white. 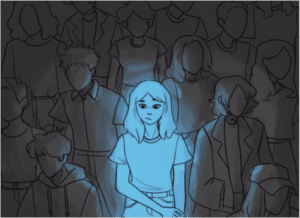 Despite being one of the 20 million Asian Americans living in the United States, it’s easy to feel completely alone.

When writing this article, I tried to think of ways to blend the peel and the fruit together, representative of my cultural and my ethnic appearance, but failed to do so. Is it impossible to mix the two parts of my identity? Or am I just bad at thinking of effective metaphors? Whatever the case may be, I thought the issue too apeeling to pass over. In other words, I want to peel back the layers of stigma and awkwardness surrounding discussions of race and get a bunch of new thoughts about the issue.

By some standards, I am considered a “Bad Asian.” I’ve had Asian peers tell me, jokingly, that I am “a disgrace to the race.”

In contrast to the stereotype that Asians have to play a classical instrument, I quit playing the violin when I was twelve. I eat Chinese food maybe three times per year. Indian food probably twice, Thai, Burmese, or Cambodian…maybe once. The extent of my Mandarin vocabulary is limited to nǐ hǎo (hello), xiǎo māo (small cat), and xīguā (watermelon). Conversational basics.

Relatives of friends, servers in restaurants, and what felt like the entire population of China, all seemed disappointed in my lack of Asian-ness and Asian pride.

I found and continue to find myself unable to contest their silent (or not so silent) judgments. I feel like a fraud, masquerading as my occasion-specific identity takes priority over the other. Not quite Chinese enough, but too Chinese to be a fully white American. When I’m not busy feeling like a fraud, I feel guilty. Guilty for prioritizing my happiness over playing the violin. Guilty for being unable to communicate with my distant genetic relatives in a bustling Chinatown. Guilty for not taking more pride in my cultural background. But why do I feel guilty?

By other standards, I am the epitome of Asian, specifically Chinese, stereotypes. I am short. I have dark hair and brown almond-shaped eyes. I am in an advanced math class. I have terrible eyesight and wear glasses. I can be socially awkward. I’m bad at sports (however, I did play soccer in kindergarten and I was really good). I don’t have my driver’s license yet, so I can’t confirm if I’m a bad driver.

Despite all of the math classes taken, Mandarin lessons suffered through, and Moon Festivals participated in, I still feel disconnected from the culture of my ethnic origins. In many ways, I relate more fully to American culture than Chinese/Asian culture.

I am tan. I attend cookouts and backyard barbeques, nibbling on whatever non-red meat food items there are. I am a proud customer of Amazon and many other international empires that will one day rule the world. I don’t have an accent.

On more than one occasion, I’ve found myself telling people that I was “made in China and exported to the States.” Playing into the commercialism and consumerism that seems to be an inseparable aspect of American culture is a hit.

But a darker truth is thinly disguised within the phrase. Other connotations arise when a product carries the label “Made in China”: the product itself has been cheaply produced and shoddily constructed in some sweatshop for the greedy American consumer. What sort of message am I sending about myself and my country of birth, if I compare myself to a 100-pack of crappy plastic kazoos?

I was never taught to distance myself from or devalue my Chinese heritage. It sort of just… happened.

I was lucky to have been adopted by a white couple who understood the importance of keeping those cultural connections through my youth. My parents were open with me about my origins and emphasized Chinese and Asian culture during my childhood. They supported my continuation of Mandarin lessons, kept in contact with one of the other families from our adoption group, among many, many other things. They did the best they could. It just didn’t stick.

Society has programmed most of us into the mindset of “box-fitting”: the concept that we must adhere to a specific set of values, beliefs, and appearances to fit into a specific identity — either one that is common, accepted, or expected of you. However, the “box-fitting” method does not account for the numerous discrepancies between the stereotypical identity you are born into and your chosen identity.

Based on my appearance, many people correctly assume that I’m Asian. I fit some Asian stereotypes and don’t align with others. Bad eyesight and decently high academic scores? Yes. Raised in an Asian household with Asian culture ingrained into every fiber of my soul? Not really.

Based on where I live, people assume a different set of stereotypes. That I’m rich, that I like avocado toast, that I live off of social media and Netflix, and whatever else ‘American youths’ are supposedly into. That I own American-flag printed memorabilia and eat hamburgers for breakfast. 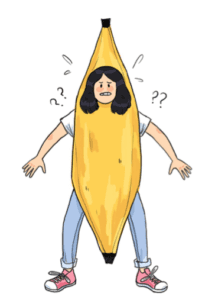 No matter if these assumptions are right or wrong, they are stereotypes about culture and identity. They are not a good measure for the combination of expected identity markers and cultivated. This is not an issue of fitting or not fitting a stereotype, but an issue of the way we view it. The societal pressure to fit into or derive identity and personality from a set of immovable stereotypes can negatively impact people trying to find their place in the world. They can be limiting, or they can be inspiring; they force you to live as a shell, or they help raise you up and contribute to a portion of your character and identity.

So yes. By society’s restrictive stereotypes, I am a bad Asian. But I’m not an all-star American, either. However, this is not bad. I should not be shamed for this. I should not feel guilty about my identity.

I’m a combination of my different cultures, my childhood experiences, and random things I think are cool. Everybody is a blend of everything and that should be accepted, respected, and celebrated. I’m now in a fruit salad with all the other diverse people of this world. One big toss-up of unique identities and personalities. To me, being a banana just means being (banana) split between your expected and your chosen identity, a struggle each and every human on this planet has faced at some point in their life. 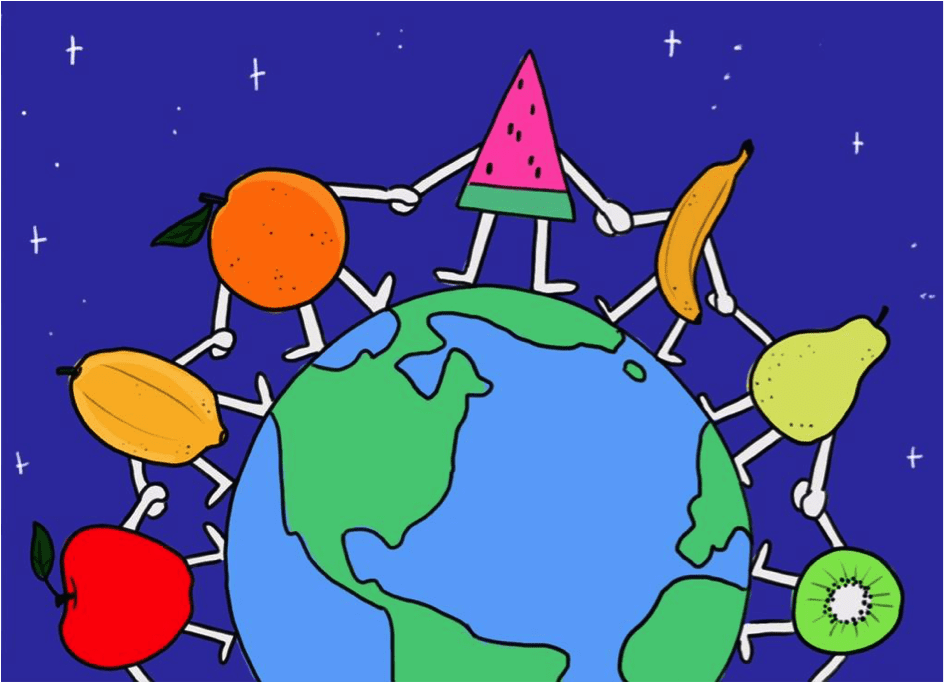 If you’ve read this far, I applaud you and your tenacity. If you’re Asian American or if you’re not, identity is still a weird and confusing topic. I hope at least one thing I’ve said is relatable.

From this banana to all the other bananas of the world, never fear.