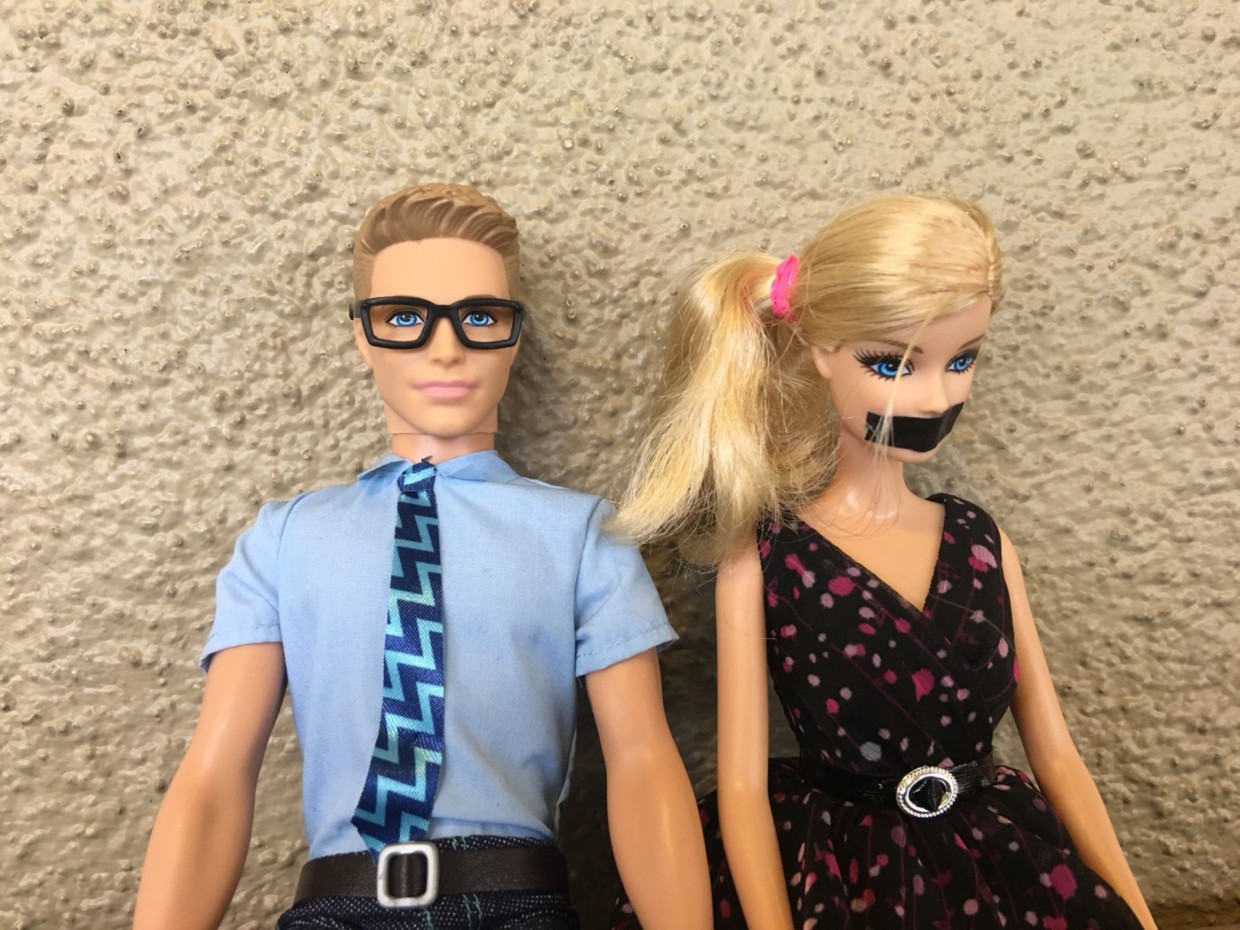 Hollywood Not Quite So White, But Still Too Male

The issue of diverse representation in the media has been a high profile topic in recent years. Last awards season, the hashtag #OscarsSoWhite drew major attention to the lack of roles in film for people of color. And although this year’s Oscars are not quite so white, a study of the speaking roles in 2016’s biggest movies revealed a related issue: a disappointing lack of female representation.

The independent study, conducted by Amber Thomas, a data scientist who published her findings on Medium, analyzed the gender of all the speaking roles in the ten highest grossing films of 2016, and how many words each speaker said. 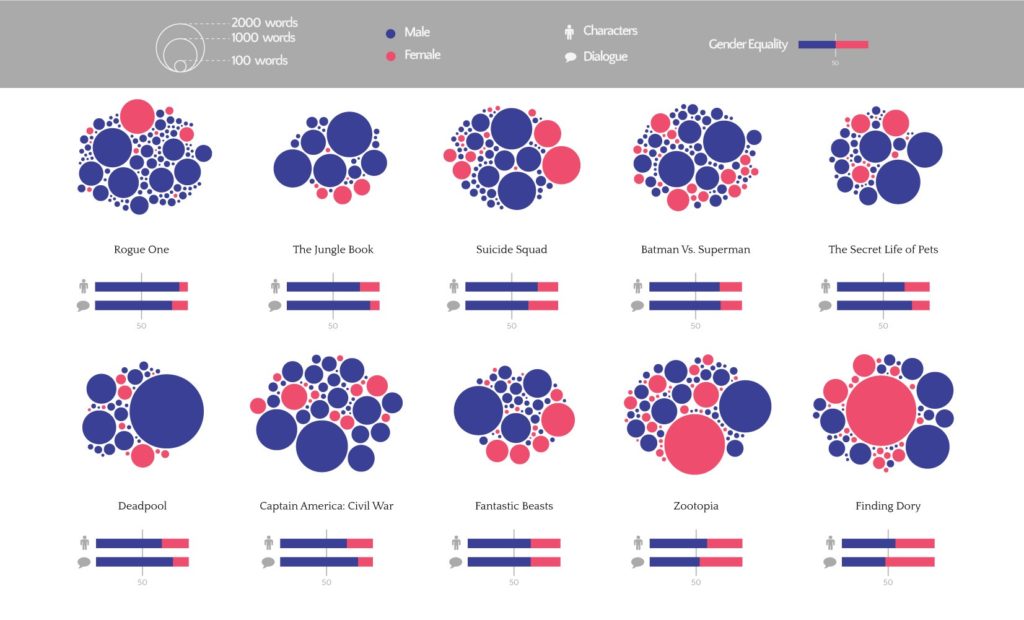 Thomas’ results were startling. With respect to speaking roles, not a single film had gender equality. Of all ten movies, women said only 27 percent of the dialogue.

Thomas decided to explore the issue of gender representation in media after seeing “Rogue One,”the newest Star Wars movie. “I had expected to see plenty of female characters in this film and after seeing it, it seemed like there were almost no female characters,” she explained through email.

Ironically, “Rogue One” — whose co-lead, Cassian Andor, is played by Diego Luna and speaks with a Mexican accent — has been a leading example of diversity in terms of race and ethnicity. Yet, besides the main character Jyn Erso, the film is entirely lacking in major female characters. Thomas’ results are not an anomaly. There are numerous studies, from the crowdsourced Bechdel test data, to Polygraph’s analyses of film dialogue and production teams, to comprehensive studies of diversity in media by the University of Southern California (USC) or the Geena Davis Institute on Gender in Media, that reveal that underrepresentation of women is a real issue in Hollywood. Furthermore, women of color face even worse underrepresentation, and portrayals of LGBT+ and disabled women are almost nonexistent.

If we have all this evidence of inequality, then why do we continue to see the same narratives in movies?

Part of the issue is identified by the aforementioned studies by Polygraph and USC: the lack of female representation at all levels of film production. When women are excluded from directing, writing, and producing films, they are much less likely to include equal representation. Until there is gender equality behind the camera, those on screen will continue to represent a very small portion of our society.

In addition, without equal creative teams, any representations of women will most likely be inaccurate, tokenized, or stereotyped. “Finding Dory” was the only film from Thomas’ study that had equal male and female dialogue. Credit: Disney/Pixar.

What is necessary, then, is concerted and strategic efforts by the film industry to increase female representation at all levels of production. An example of the efficacy of deliberate reform efforts is the Academy’s adjustment of its voter membership policy after the #OscarsSoWhite campaign. Among other reforms, the Academy pledged to double female and minority membership by 2020. This year, that commitment to diversity was reflected in the nominations: between one and three nominees were people of color in every major category, as opposed to zero in the past two years.

However, the Oscars still have a long way to go; the only Latino nominee was Lin-Manuel Miranda for his original song “How Far I’ll Go” in “Moana,” there is not a single female nominee for best director, and Allison Schroeder, co-writer of “Hidden Figures,” is the only woman nominated for original screenplay.

In order to encourage media companies to make gender equality a priority, we must also understand why accurate representation is important in the first place. At the core of this issue is the idea that media, which has become such a pervasive part of everyday life, is an incredibly powerful tool in our society. To control the media is to shape the nature of popular discourse and norms.

Thomas noted this normalizing power of the media as well. “I started discussing this observation [of underrepresentation in Rogue One] with friends, but they hadn’t really noticed the lack of female representation,” she remarked. “When we repeatedly see movies that include a variety of characters and locations but women are side-lined, it begins seeming ‘normal’ that women are only occupying 30 percent of the space.”

In terms of the film industry, movies are a core part of popular culture; in 2015, the U.S. film industry was valued at over $30 billion, and in 2016 over 13 billion tickets were sold in North American box offices. This love for movies makes it one of the most wide-reaching and thus powerful forms of storytelling in society.

When white, cisgender, heterosexual men are the ones who have this power, film becomes a platform for upholding existing oppressive structures, whether intentionally or not.

What this can translate to in real life is a passive acceptance of harmful ideas. Thomas elaborated: “When [I was] watching some of these movies, I really thought that there was an even number of male and female characters, but when I looked at the numbers, the[y ]… were actually about 30 percent women. Does that mean that I really perceive something with 30 percent female characters as 50 percent?”

The skewed perception of equality that Thomas experienced personally indicates a greater issue: when we fail to question what we see, we absorb and internalize whatever is on the big screen — like the idea that women only need to share about 30 percent of the positions in any setting.

However, like any form of storytelling, film can open people’s minds to the experiences and perspectives of others. What differentiates it from other mediums is its unique ability to truly transport viewers into the world of the story.

When executed properly, films thus have the opportunity to revolutionize the way we think about women’s role in society. Take box office hit “Hidden Figures”; the film, which depicts the untold story of three black women who worked for the National Aeronautics and Space Administration ( NASA ) in the 1960s and were crucial in sending Americans into space, subverts the idea that black women don’t belong in fields related to science and math. 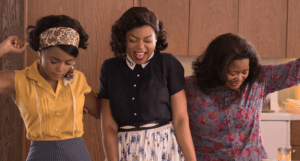 Perhaps most importantly, accurate representation in film validates the diverse experiences of women. When people see themselves represented on the big screen, it sends that message that their experiences are worthy of being shared, and that other people care about them. Much of what young girls aspire to is influenced by images they see, so having heroes that look like them is crucial in developing a positive sense of self and an ability to dream big.

While it’s unclear whether better representation in film is a catalyst or a reaction to progress, one thing is clear: without the presence of women at all levels of the industry, women will continue to be pushed aside, without a voice.