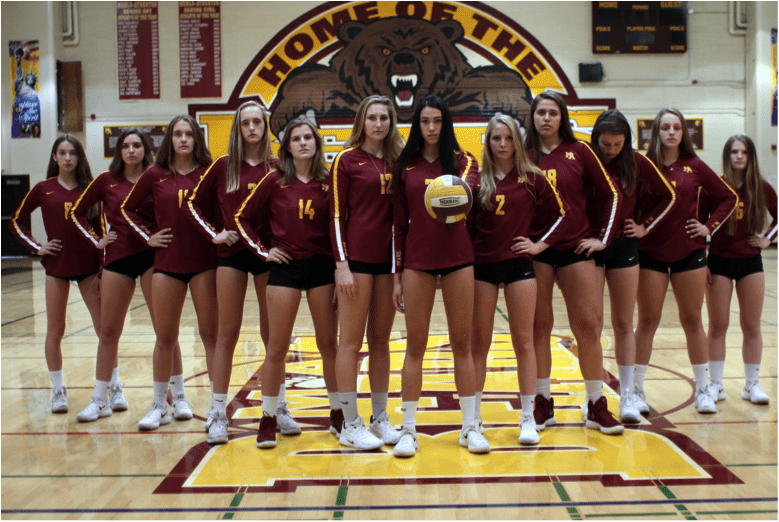 As the volleyball season reaches its halfway mark, the varsity Bears sit tied atop the Peninsula Athletic League (PAL) standings, and have been rattling off wins against quality opponents in the process. The Bears had a eye-catching preseason, with convincing wins against Palo Alto, Menlo, and league rivals Woodside and Carlmont. The bears made quick work of Paly (3-1), Menlo (3-0), and Carlmont (3-1), but won in nail biting fashion versus Woodside at their home gym (3-2). Senior co-captain Erica Fischer recognizes the importance of these early season victories, specifically against league opponents, as putting future opponents on notice that the bears are a “force” this season in the PAL. 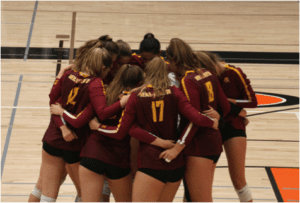 The Bears celebrate after a point. Photo Credit: Clay J.

As part of the team’s dominant preseason, the Bears showed determination in winning the highly competitive Chandler Invitational Tournament. In the second game of the tournament, the Bears were taken down by Palo Alto, determined after M-A defeated them weeks before in the season opener. However the Bears stormed back, dominating their next three opponents, including a victory over Menlo in the championship, who hosted the tournament. Junior setter Mariah Grover was awarded Palo Alto Weekly’s High School Player of the Week honors for her performance in the tournament, and sophomore outside hitter Emma Spindt received an honorable mention nod. The San Mateo Daily Journal additionally named Spindt Athlete of the Week.

Currently, the Bears are tied atop the PAL with Aragon, who they suffered a brutal 3-2 defeat to in their league opener. Head coach Jairo Sierra, now in his second season at M-A, discussed how the Aragon loss “put a lot of things into perspective and gave us an opportunity to grow internally.” Senior middle blocker Sawyer Jones echoed these remarks, recounting that the loss “gave us insight for the future of our season. We have come to learn that fighting all the way through each game is critical. Never getting ahead of ourselves and to fight for each other.” 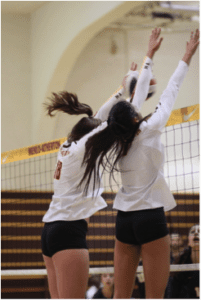 All members of the team reciprocated the constant emphasis of taking each step of the season individually. Sierra stresses, “the notion of one day at a time. Same philosophy as we play, one point at a time.” When asked about what games will be important coming up, Jones replied that, “There is no specific game that is the most important. Each game is as important as the other, and we continue to fight like it is our last.” The Bears look to carry this same mentality into the second half of league and the postseason.

M-A’s success this year has not come without dedication from the team. Jones noted the work ethic of this year’s squad “is stronger than [she has] ever seen before.” Fischer added that as a team captain, her main responsibility is to “try to set a good example for [her] teammates”, but went on to express that she rarely has to because they “do a good job of balancing work and fun, and it is a honor to be their captain.”

Sierra also noted the quality of players top to bottom on this year’s roster, mentioning that the “depth on the team allows us to plug and play anyone on the roster”, and that the team has the advantage of not being “victim” to a lack of serviceable players. Standouts include senior Alicia Letvin, Emma Spindt, junior Marit Hoyem, and the Grover twins, Mariah and Natalie. Letvin, a force at opposite hitter this season, is committed to play volleyball at UC Davis next fall.

Seniors playing their last season at M-A include Fischer, Jones, Letvin, and opposite hitter Kathryn Jones. All acknowledge that this season is their last chance to make a run at the state championships, which the Bears are putting themselves in good position to do. Currently, M-A sits at fourth in the highly contested Central Coast Section, and forty-fourth in the entire state. Jones recalled that at the start of the first practice of the season, the team set the goal of working their hardest every practice with the ultimate objective of winning state. “Our goal for the season is State, simply not just going, but winning. We work to be the best and plan to be the best.” Sierra added, “As long as we’re continuously learning and growing each day then we’re achieving any goals we put forth. The amount of work and time that this team has put forth behind their craft should enable them to reach the ultimate goal… appreciating and enjoying the process together.”

The Bears look to come one step closer to reaching their goal as they take on Aragon on October 11, in a highly anticipated league showdown. M-A students and fans are invited to come out to Ayers Gym at 6:15 p.m. to support.