On Tuesday night, the M-A girls volleyball team beat the Aragon Dons, for the second time this season, in four sets. Despite losing the first set 21-25, the Bears eventually rallied and won the next three sets, finishing with a dominant 25-8 victory in the final set.

Starting off strong, senior setter, and captain, Becca Schulman had an ace, followed by a kill from senior setter and rightside Anna Ryan. Later on in the set, junior Aria Sokol and senior Heaven Te’o blocked a powerful hit, tying the score to 8-8. The first set was intense, as the score was close, with Aragon having a two to three-point lead for most of it. Senior libero Clara Cronin hustled around the court, taking control of the defense. However, in this set, Aragon’s offense was too much for the Bears to handle and Aragon won 21-25. Senior Marta Mordec said, “during the first set the energy wasn’t very high.” 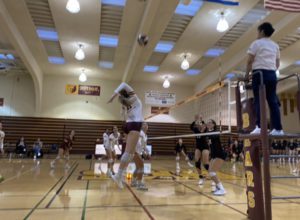 Ryan goes up for hit

However M-A’s offense raised the energy during the second set. “We had a great kill percentage,” said junior Samantha Lin. Mordec had an early kill from the outside, increasing the Bears lead to five points. Lin, a new middle blocker, also had multiple kills during the second set. Lin said, “the lineup was switched a couple times. I ended up playing middle blocker because the coach wanted me to help with the hitting and blocking on our side, so it was definitely pretty interesting to try a new position.” A kill from Sokol helped rally M-A late in the second set. “We had these little moments in the game where we got really excited,” said Lin after the game. This set ended with a double from Aragon, tying the game at 1-1 in sets. 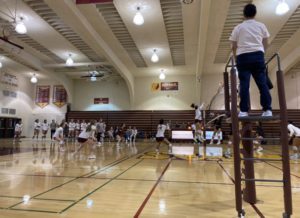 Lin and Mordec go up for a block

The third set was packed with rallies that were thrilling to watch for fans. The set started with the “this is our house” chant, and the team’s energy translated to their play. Sokol’s strong serves were too much for Aragon’s passers, and big blockers from Aragon were not able to defend Mordec, as she scored three points in a row through two kills and a tip. The score throughout the set was nail-bitingly close, M-A often leading by only a single point. Fortunately, digs from Cronin and kills from sophomore Daniela Eline and Ryan increased the gap between M-A and Aragon, resulting in a 25-18 win for M-A in the third set.

M-A came out on fire in the fourth set jumping out to a 5-1 lead, causing Aragon to call a time-out. “Aragon got tired because we stepped up the game by doing a good job offensively,” said Eline. “They tried to serve short to trick us but eventually we got the hang of it.” During the final six points, when the Bears pushed for a quick win, sophomore Meki Maile went on a serving run–taking four aces out of six serves. Sokol ended the game with a kill, leading to cheers in the stands from fans and parents and the team rushing onto the court in celebration.

According to Lin, “by the second set, we are able to establish our defense and offense to adjust to the other team. We played one of our best games this time.”

Maile also added, “at the beginning, it was a bit rough, but we fought really hard and we came back stronger in the next three sets. Our mindset was much better and we were aiming for an opposite sweep and it happened.”