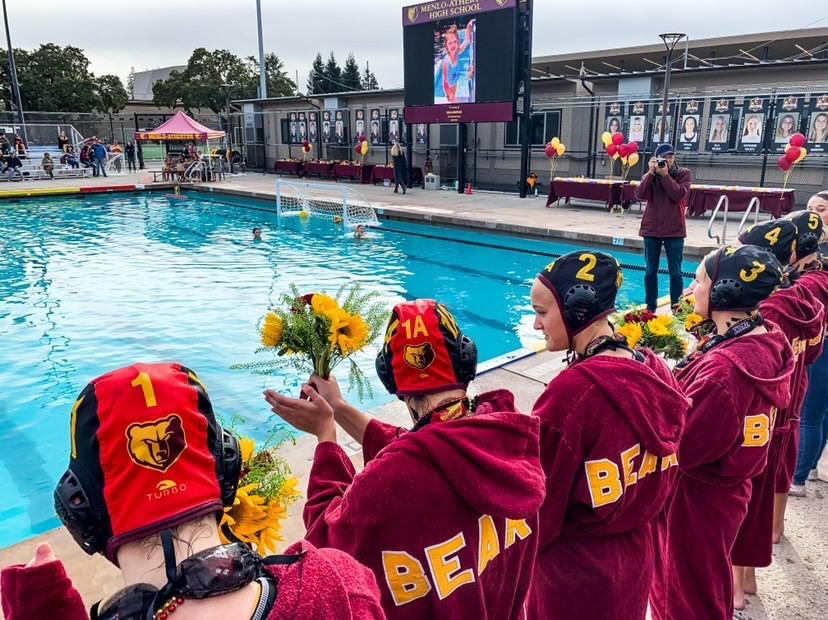 Both girls and boys waterpolo teams were victorious last Tuesday, the girls winning with a final score of 14-6 and the boys 20-7. Facing off against San Mateo and Aragon, the Senior night was one to remember. The girl’s team started off the game with a quick start, firing at the San Mateo goalie to secure an early lead. The quarter finished with senior Ella Nelson’s sprint across the pool to connect a pass with senior Mia Wurster. Wurster then scored the final goal to pull ahead of San Mateo with a score of 5-4 at the end of the first quarter.

The stands were full of parents and students who showed their love with posters, flowers, and shirts for the girl’s team. Senior Cate Whittaker said, “The highlight of my game was definitely looking out at the crowd and seeing all the support for us. All of my friends went full out and brought posters, shirts, and candy, so every time I felt discouraged or made a bad play I would look at the crowd, and that was super nice.” 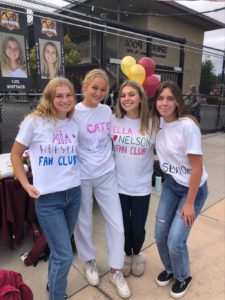 Seniors pose with their spirited shirts

Heading into the second quarter, the Bears stepped up their game and dominated the pool. They picked up the intensity as players made several seamless combination plays. Senior Ella Nelson pulled off a memorable counter-attack on San Mateo, resulting in a 10-6 lead in the third quarter.

Whittaker said, “Something unique about our team is that we are a tiny team but have great strength and endurance.”

After a victory with only one substitute, the girls set the bar high for the boy’s team, who were eager to start their senior night game soon after.

The boys did not fail to meet the girls’ standards, crushing Aragon 20-7. They ended their last home game with an impressive 19-5 record, ranked first in the Peninsula Athletic League (PAL) this season, with an undefeated league record of 9-0. Senior JJ Jones said, “​​The team this year has done absolutely outstanding. Our coach Tim Kates has really pushed us through every setback while still cracking jokes and having fun.”

The boy’s team kicked off the first quarter just as the girls had, winning the swim-off and netting a goal in the first 30 seconds. Senior goalie Jake Taylor defended the goal exceptionally, blocking all of Aragon’s shots, and ending the quarter with a shut-out 4-0 for M-A. 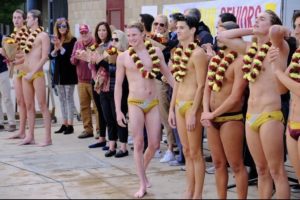 Aragon scored their first goal about two minutes into the game, but senior Miles Scherer and Julian Montoya widened the gap, assisting each other twice to net two goals. Despite playing with an arm injury, Jones was able to score in the second quarter, encouraged by the crowds. Jones said, “It felt so great to get back in and play. I had to pass and shoot left, so that was pretty awkward.” Seconds before the buzzer sounded, senior Jackson Garff scored another point, ending the second quarter 11-2 for M-A.

In quarter four, Scherer continued his steals against Aragon, helping ensure his opponents did not score. Kilikano Lee blocked Aragon’s Xavier McKenzie’s shot seconds before the buzzer rang, ending the game 20-7 for the Bears.

After a successful season, the boy’s water polo team will play their first CCS match this Saturday, November 6th, at M-A. Montoya said, “We’re seeded against one of the CCS favorites Menlo, though if there’s any team to pull an upset this weekend, it’s us. No matter what, we’re gonna make sure they know we’re not the private school competition they’re used to.”