The Menlo Park Police Department (MPPD) hosted the first Friday Night Lights event of the season in downtown Menlo Park on September 9th. According to Robert Jonsen, chief of the MPPD, the event began in 2013 and is a monthly event that occurs “in conjunction with the football season.” Sergeant Matthew Ortega explained that families and officers had the opportunity to connect “on a different level than just on the street” at this gathering.

Jonsen has “been the chief of police for Menlo Park for the last three-and-a-half years.” He remembers “always [wanting] to be involved with the community ever since [he] was relatively young.” Being a police officer seemed “like [his] calling.”

Ortega, who has been with the MPPD for 17 years, explained, “[Jonsen] thought of this idea Friday Night Lights which is kind of a football thing.” He continued, “[The] first time we did it was a Friday night…and we did it the night before a football game… After that we’ve been trying to do it every year because it’s a great event.” Other venues include the Boys & Girls Club as well as Menlo Park’s Caltrain station.

Hughes and Jonsen pose for a photo.

The MPPD not only tries to attract parents, but also engages “the younger generation,” according to Jonsen. Ortega described the main activity in which children would first look for officers and get their autographs. Then, they spun the “little spin wheel…[to] get little prizes and giveaways,” such as a small football or keychain.

Officer Galen Fliege, a graduate of M-A’s class of 2011, “has worked [at the MPPD] for three days.” Prior to becoming an officer he worked as a community service officer and explorer. Fliege was inspired to “give back to the community” after growing up in Menlo Park.

Corporal James Levuano, who has served as a policeman for 15 years, was inspired to become an officer because he “wanted to serve the community in a different capacity.” Levuano reflected, “It [is] great to know that you do make a difference being out there… [Working as an officer] made me feel good [because] I was part of [serving our community], and I continue to feel that way even after 14 years.”

Friday Night Lights demonstrates the importance of community outreach events. Levuano explained, “[Community members] get to know our faces and know who’s patrolling, so they can know who’s responsible for the things that go on in their community…They need to know that.” In addition, Levuano stated, “This is a time where we don’t have to do [our usual work] and we have time just to meet people in the community.”

Fliege (left) and Luevano (right) smile at the first Friday Night Lights of the year.

Eleanor Hilario, a Code Enforcement Officer, describes her role in the police enforcement as “very rewarding” but also “very stressful.” However, in events like Friday Night Lights, Hilario is able to enjoy “interacting with kids and all the residents.”

Three boys having fun at the first Friday Night Lights. The fifth graders value MPPD officers because “they protect us” and “are doing service for our community.”

Sergeant Kevin Paugh, serving his 19th year in the police force, realized his dream of becoming an officer that he first had “when [he] was a little kid.” He added, “I just thought it would be a fun job helping people. It’s different everyday [and] I don’t have to sit behind a desk.”

Officer John Del Mundo agreed with Paugh and added, “At the same time you get to help people.” Del Mundo briefly touched on “how people always look at cops in a negative way.” However, he continued, “[Friday Night Lights] is good because it’s none of that stuff. You get to know the community and they get to know you.”

A girl smiling as Del Mundo signs his autograph.

Paugh stated the goal of Friday Night Lights: “It’s great to be able to get out and interact with the community… We’re able to let them know that we’re people just like them.” Ortega agreed, “We’re trying to get our officers to meet people in a different way so that you can see we’re human too.”

Menlo Park officers will be hosting the next Friday Night Lights at the Boys & Girls Club from 5:30-7:00 p.m. on October 14. 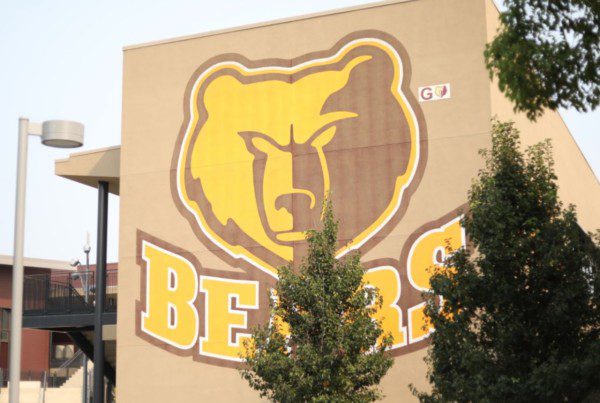