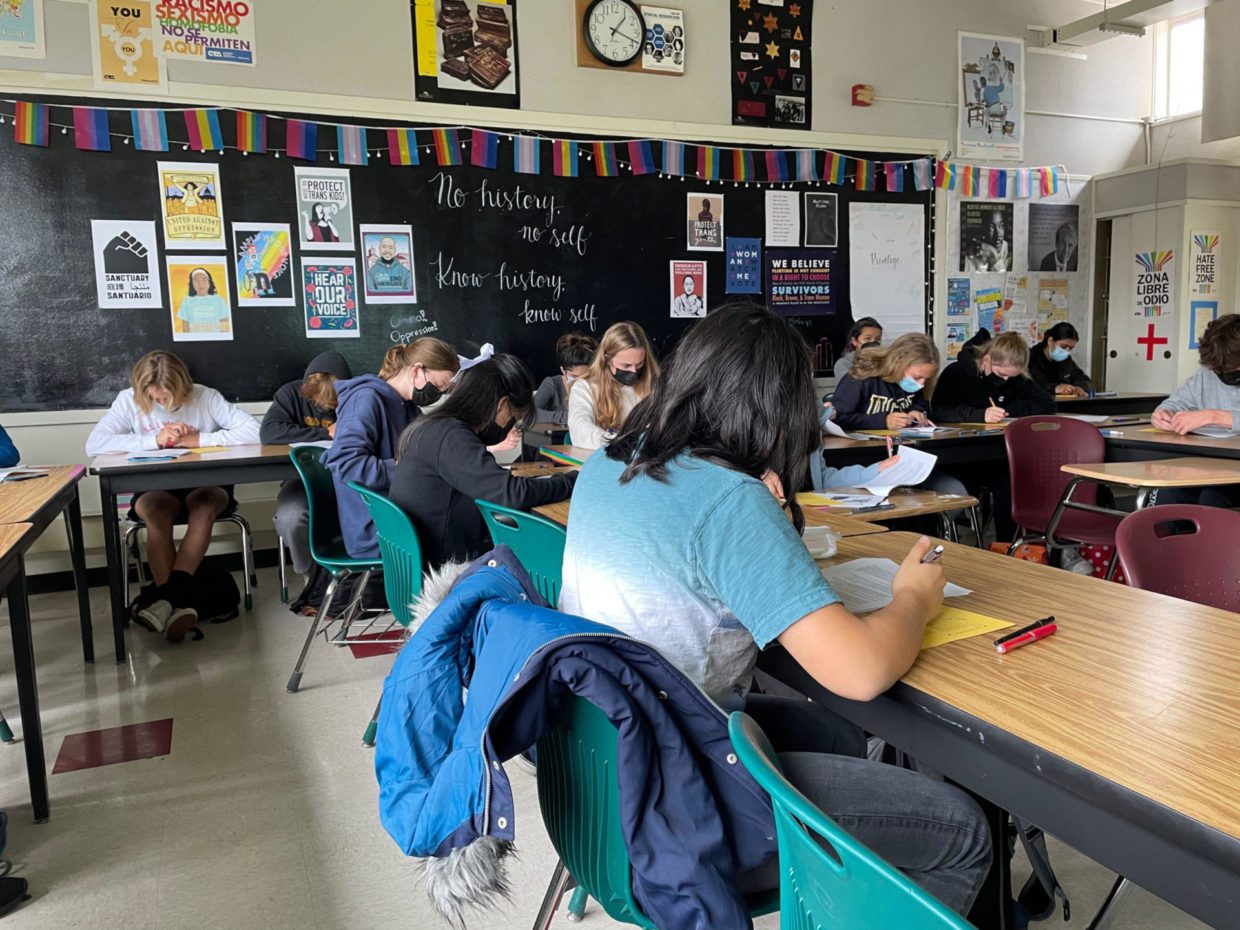 This week, for the first time in two years, M-A students are taking in-person finals. Sophomores and freshmen have never taken in-person high school finals, and even juniors and seniors haven’t been on campus for finals since they were underclassmen. For many students, finals season is always stressful, but for some, nerves are especially high this year.

French teacher Florence Tubiana explained that distance learning made it difficult for students to transition back to school, something that continues to affect students’ preparedness for finals. She said, “I think students took bad habits from last year, with the light schedule and less homework each day. So I think that coming back was hard, especially for freshmen and sophomores who are not even familiar with the campus.”

In contrast, “With the upperclassmen, the idea of finals isn’t as foreign, so they’re going in with a better understanding of what to expect,” explained Patrick Roisen, who teaches both regular and AP Biology.

Still, students of all grades have mentioned that COVID-19 and distance learning made it difficult to prepare for finals this semester. Junior Dafne Segura Diaz said, “It was easier during COVID. It was at your own pace, and I feel like teachers went easier on you. Now, during in-person, there’s usually way more material.”

Sophomore Nat Barman added, “I’m a little stressed because teachers are now like, ‘we’re back in person, so you’re not going to have this safety net anymore.’ Last year teachers helped us out more, like some teachers let us use notes on the final, which isn’t happening this year. Still, I think it’s also going to be easier to test in an actual classroom rather than my bedroom.”

Teachers have adapted their finals to make sure that students are prepared. Tubiana said, “I’m approaching finals differently this year: I’m giving finals that are not as specific as I used to with reviewing vocabulary and grammar. This time, it’s more generic.” However, she added, “I’m glad to be able to help my students, but I don’t think we’re necessarily doing them a favor, because this is what it’s about. This is a real schedule. It’s not harder than usual. They were just used to a different schedule and much less work. So as much as I understand their stress, I’m here to make the students independent.”

Ethnic Studies and Modern European History teacher Amanda Alvarez said that even though students came back from distance learning with “gaps in their skills like writing and reading stamina,” she’s still “confident that my students are ready for their final and will do well on it.”

As the Chronicle reported last year, 88.3% of surveyed students cheated on tests during distance learning. As a result, some teachers have added extra cheating precautions for their finals this year, including English teacher JP Nelson. He explained, “We’ve created a system where success is more important than honesty and ethics. For that reason, on my final, I will be doing a lot that my students don’t even know about to make sure they can’t cheat. Their final is a skills-based assessment on a passage my students have never seen before.”

Teachers have also provided extra study materials and support to make sure students are ready. Roisen said, “I’m providing more time to prepare for finals in class, and I’m in my room at lunch and after school for any student who wants to get any extra help.”

Freshman Benji Weiss said, “Originally, I was kind of nervous because I didn’t know what to expect. But then when my teachers told me what was going to be on the finals, a lot of them weren’t as bad as I was expecting, and the teachers have been really supportive and have provided lots of materials to review. Honestly, overall, it’s not that bad.”

Still, the structure of finals week, with several exams and large projects in one week, remains stressful for many students. Senior Kate Trevor explained, “Especially if you’re a student with a grade on the cusp of being where you want it, finals are extra stressful. I think teachers sometimes underestimate the fact that they’re not your only class. It’s difficult because students have six classes, six finals, and six stressors.”

Junior Simeon Upton explained, “I really wish that teachers would understand how burnt out you can feel in finals week. I feel way more tired and just generally beat down for finals week than I should. There’s a lot of stress and burnout that can come from having a huge testing period right at the end of the semester.”

Alvarez reminded students, “If you are feeling an overwhelming amount of anxiety or stress about finals this year, reach out. Teachers will work with you to find a way to make sure you are able to do your best on your finals.”

M-A also has mental health resources available for students, including the Zen Den in B-22, where students are free to go for a break during the school day or to talk to M-A’s counselors.

Roisen said to students, “Finals are important, but they are not the only thing that determines your grade. You’ve worked hard the entire semester, and that work has a much bigger impact on your grade than any one test, even a final. Take it seriously, but don’t fixate on it.”