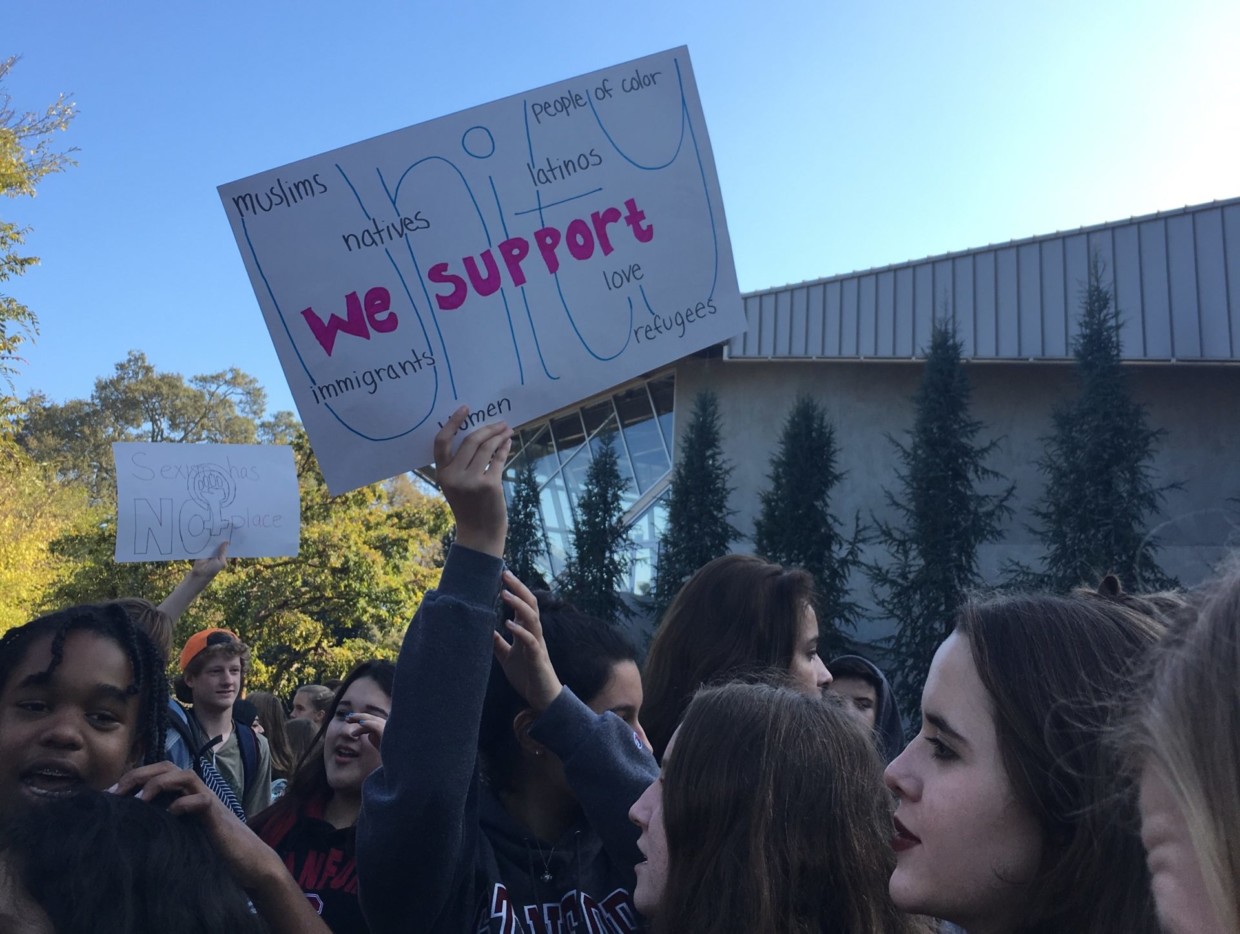 Editorial: We too, are America

They’ll see how beautiful I am
And be ashamed—
I, too, am America

Last Tuesday, Donald Trump was elected president of the United States. Many M-A students felt a somber mood settle on campus and in the community. Living in a liberal area, many of us may feel shocked at the outcome of this election, and for most M-A students, it is the first time we will be experiencing a Republican presidency at a time when we are old enough to understand and form our own political opinions.

M-A students and Americans alike have expressed disbelief at the reasons that other people voted for an opposing candidate. Whether people were influenced by religion, their parents’ beliefs, personal experiences, or the region they live in, it is admittedly very difficult to understand the opposing perspective. In acknowledging this challenge, we validate the importance of listening to one another above all else in response to the election results.

On both sides of the aisle, this election has been focused on expressing ideas without listening to the other party’s opinions, which has caused an extremely polarizing election season and has infused hatred and fear into the political opinions of most Americans. When people refuse to listen to each other, the result is a deeply divided country.

If we continue to throw our opinions into the political discourse without taking others’ needs into consideration, we will not be able to function as a democratic nation.

A hallmark of democratic society, particularly in the United States, is the ability for all individuals to express their ideas (save for hate speech). Majority groups have effectively encroached upon this right. These majority groups, whether political, religious, or racial, are often condescending toward people who do not share their views, leading to a sense of apprehension and even fear among minorities.

This phenomenon could explain the inaccurate polls prior to the election. Because supporting Trump was an unpopular opinion in many people’s eyes, especially in the view of many media outlets, voters may have concealed their true intentions for the election by lying to or misleading pollers.

Understanding of this occurrence throughout the United States is important, not for the support of one partisan side or another, but rather for the insurance of the comfort and safety of all American citizens in expressing their ideas and opinions freely.

No matter how devastated many feel as a result of this election, it is critical to unify as a country. President Barack Obama remarked in his speech on Trump’s victory on Wednesday,

“The day after [the election] we have to remember that we’re actually all on one team. This is an intramural scrimmage. We’re not Democrats first. We’re not Republicans first. We are Americans first.”

In her concession speech last Wednesday, Secretary Hillary Clinton urged her followers to put aside their differences and come together under the new administration: “Our campaign was never about one person or even one election. It was about the country we love and building an America that is hopeful, inclusive, and big-hearted. We have seen that our nation is more deeply divided than we thought. But I still believe in America, and I always will. And if you do, then we must accept this result and then look to the future. Donald Trump is going to be our president. We owe him an open mind and the chance to lead.”

Immediately after the results of the election, people’s emotions are high, and it is hard for some to consider the validity of opinions that oppose their own. An emotional response is understandable, and some people may need more time to come to terms with the results. However, listening to others’ opinions could be the best way to heal and understand.

Although Trump has recently made overtures to bring people together, his campaign rhetoric targeted several groups of marginalized people starting with his June 2015 announcement to run for office, in which he blamed Mexico for sending “rapists and murderers” to America.

Trump’s rhetoric has acted as a catalyst in rising hate crime incidents which has caused some Americans to feel validated and more confident in their open discrimination against others.

This situation frightens some M-A students, many of whom are members of Trump’s marginalized communities.

In January, Trump expressed, “I would be very strong on putting certain judges on the bench that I think maybe could change things,” referring to his opposition to the Obergefell v. Hodges Supreme Court decision for marriage equality.

Additionally, more than 11 million immigrants across the nation are scared for their future. Since the beginning of his campaign, Trump expressed strong consistent hate toward immigrants; from belittling Mexicans and promising to create a deportation force, to getting rid of many laws benefiting non-citizens, many fear whether he will follow through with his promises.

At M-A, where Latinos account for 42.8 percent of the student body, some students have parents who are not citizens or are themselves born outside of the country. Many moved to the United States at a young age, and are currently protected under programs such as Deferred Action for Childhood Arrivals (DACA) or the Development, Relief, and Education for Alien Minors (DREAM) Act which provides them with working permits and opportunities for more financial aid when applying to colleges. Before his election, Trump emphasized his plan to expedite the termination of both of these programs, and students worry if all of the hard work they put in throughout their life will soon be worth nothing.

Furthermore, many members of the Latino population at M-A are refugees who fled from countries full of violence and turmoil into the United States in hopes of safety and acceptance. Now, however, many feel the same way they did in their home countries.

The Republican Senate, House of Representatives, and Supreme Court Justices that Trump will appoint will have a major influence in decisions on these issues and could potentially undo the progress that many now take for granted. Anxieties fly high about conservative policy-makers who could dominate government for years, even after Trump leaves office.

Many protesters of Trump’s election and his upcoming presidential administration have adopted the slogan “Love Trumps Hate.” This is an effective rallying call for political activists against Trump, however, dissenters from Trump’s policies should not overstep their civil rights and refrain from directing any hatred or resentment toward Trump supporters. The slogan calls for love, and thus people who want to adhere to this call should consider their own bitterness and anger invoked by the presidential election before acting rashly or hatefully.

Loving others does not mean that we have to share or approve of their views; rather, we can show love to the people around us by understanding their concerns and by recognizing their constitutional right to express their opinions.

Regardless of the political opinions of individual Americans, Trump will be the president for the next four years, as the majority of current M-A students become adults and go to college. These are formative years for all of us, and the actions of this administration will affect us deeply no matter what. As M-A students approach adulthood, it is important to remember to stay involved in local, state, and national politics and exercise the right to make your voice heard. Election results only reflect the nation’s values if people vote. It is imperative that our generation continues to lobby to our representatives and vote in every election possible.

If people are upset with the current political situation, they should take action and advocate for what they believe in. Change is inevitable; it is just a matter of participation. For anyone discouraged or angered by the election, remember that we can affect change by standing up for our beliefs while respecting the rights of others to do the same.

*The members on the editorial board have been updated to reflect the current members.