There are several reasons for this reduction; however, there is one overlapping trend: kids simply no longer see driving as a “rite of passage.” One reason for this has been the numerous restrictions that are placed on teen drivers. Specifically, for the first year after obtaining a license, teen drivers in California are not allowed to drive their friends, nor can they drive after 11 pm. Junior Adam Paczuski said, “As someone who was affected by the rules, I think it ruins the experience for us and also conflicts with the entire reason kids would want to get their license in the first place.” Furthermore, rates of teenagers working, and socialization outside of homes is decreasing. Gaming culture has increased in the US, with 81% of Gen Z’ers playing video games. Moreover, going to the mall, traditionally a very popular place for teens to hang out, has declined significantly. In fact, reports have shown that greater than one in four malls would be closing by 2022. There has also been a general trend in high school and college students pushing back other previously big “milestones” like romantic relationships; the median age of marriage is currently between 28 and 30, whereas in 2010 it was between 26 and 28.

At M-A, the trend is much different. In a survey taken by 90 juniors and seniors, 70% of respondents had obtained their license.

This trend is likely different for a couple of reasons. Most notably, M-A sits in Atherton, which, according to data collected by Bloomberg, is the wealthiest city in the United States. For this reason, many students don’t have any problem with gaining access to a car or paying for insurance and gas. Moreover, the surrounding community of M-A is more densely populated and offers more opportunities for leisure, entertainment, and socialization than average. The average population density in the US is 94 people per square mile, but in Menlo Park, for example, it is 3,525 people per square mile. This generally leads lots of M-A students to drive, because of the increased desire to do any of those things.

However, there are still many students who do not have their license. One of the most common responses from students was that they’re too busy with schoolwork. Given the time it takes students to go through a Drivers Ed program and then study for the permit test, as well as carry a permit for six months and then take the DMV road test, many teens are discouraged from starting the process. In fact, roughly 13.2% of students surveyed have their permit, but not their license because they must wait six months before even having the chance to take the road test.

Another reason some students haven’t gotten their license is due to the willingness of many to bike. One student said, “I haven’t had enough time between school work and extracurriculars and I’m also able to bike everywhere I would like to go.” In Menlo Park, the rates of individuals who own bikes is far higher than most areas, in which only about 12.4% cycle on a regular basis. On the contrary, Menlo Park has the tenth most bikers of any city in the US. Moreover, this is clearly evident given the large number of bikers who ride to school everyday and crowd the bike racks in many different areas of the school. 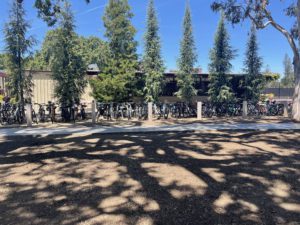 It appears to function as a decent alternative to getting a car. Another student mentioned, “I bike, and it seems to work out alright for me.”

Alex Parikh-Briggs is a junior at M-A. During this year, he hopes to write about new and changing policies at M-A as well as sporting events. Alex is also a part of M-A's Tennis Team and Debate Team.