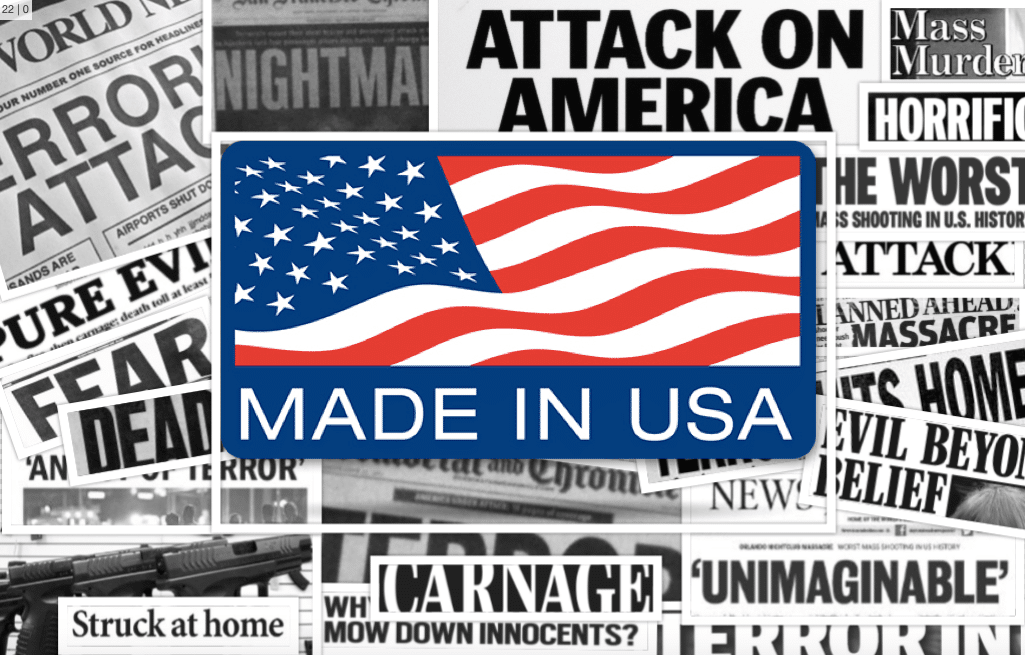 When Steven Paddock was found dead in his hotel room at the Mandalay Bay Resort after killing 58 people and injuring nearly 500, USA Today called him a “lone wolf.” Other media sources called him a “gambler,” “sole aggressor,” “local individual,” and “gunman.” Even when Paddock commits mass murder, he is not labeled a terrorist. Why?

The mass murder in Vegas was not acted out on a whim or the outcome of a frenzied mental break. The evidence found after the shooting supports premeditation— Paddock had 23 rifles, bought a “bump stock” to fire hundreds of rounds per minute, set up a camera outside his hotel room, and even had a key bomb ingredient, ammonium nitrate, in his car. Paddock’s mass murder was just as organized and premeditated as what we would typically label terrorism.

Under Section 802 of the USA Patriot Act, domestic terrorism is an act “dangerous to human life” which appears to have a political agenda. While Paddock’s motive has not yet been identified, it is not determinant in the sense that shooting into a crowd of innocent civilians is an act against one’s own country and citizens. The grisly outcome is the same as any terrorist attack, regardless of motive. His attack should be in the same category in terms of severity as jihadists who bomb buildings filled with people.

President Donald Trump’s commentary exemplifies the difference between American reactions to Muslim terrorists versus reactions to non-Muslim terrorists. When jihadist terrorism occurs, Trump responds with anger, which motivates him to toughen up on preventative measures. For example, after the Orlando nightclub shooting in June 2016, Trump tweeted that this act of terrorism calls for a Muslim-targeted travel ban.

What has happened in Orlando is just the beginning. Our leadership is weak and ineffective. I called it and asked for the ban. Must be tough

Appreciate the congrats for being right on radical Islamic terrorism, I don’t want congrats, I want toughness & vigilance. We must be smart!

After the London “bucket bomb” last month, Trump tweeted that this incident shows that the government “must be proactive” in preventing these attacks. He was enraged, and added that “the travel ban into the United States should be far larger, tougher and more specific.”

Another attack in London by a loser terrorist.These are sick and demented people who were in the sights of Scotland Yard. Must be proactive!

After the Las Vegas massacre, Trump offered “warm condolences” to the victims.

My warmest condolences and sympathies to the victims and families of the terrible Las Vegas shooting. God bless you!

Instead of presenting any proposal for legislative action to prevent incidents like this from happening in the future, Trump simply offered condolences. No angry tone, no “toughness”— as mentioned in the June 2016 tweet — and no call to action. When the perpetrators of terror attacks are Muslim, Trump has specific plans to prevent a similar incident. But when it comes to white domestic terrorism, his reaction does not convey the same sense of urgency and fury.

Doesn’t the mass murder of 58 civilians and the injury of nearly 500 call for immediate preventative measures?

On Tuesday, when asked about gun legislation, Trump said, “We will be talking about gun laws as time goes by.” This statement is noncommittal and lax. The prospect of Trump tightening gun restrictions does not seem too promising, considering his March statement that the “second amendment is very very safe right now.” At this time, bills that aim to loosen gun restrictions, which Trump supports, are circulating. If passed, they could be dangerous, especially the bill that would make gun silencers easier to purchase.

The only government-funded organization concentrated on preventing white extremism is “Life After Hate.” This program, which was founded by former neo-Nazi Christian Piccolini, aims to help people dissociate from neo-Nazism, white supremacy, and other white extremist ideologies. Before leaving office, former president Barack Obama granted “Life After Hate” 400,000 dollars. When Trump became president, however, this funding was discontinued. Now, according to Piccolini, the U.S. government’s terrorism prevention effort focuses completely on Muslim communities.

Paddock has not yet been identified as an affiliate of any particular extremist group. Notwithstanding, America’s reluctance to call him a terrorist sheds light on our country’s prioritization of Islamic terrorism over domestic white terrorism. Media and politicians emphasize that the biggest threat is Islamic terrorism. In reality, most attacks on the U.S. come from within. 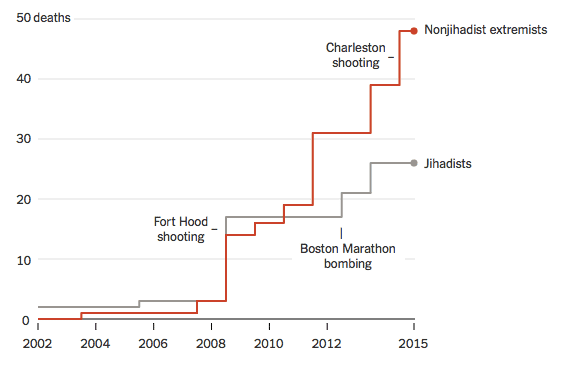 New America’s statistics in the figure above include data up through 2015. At any given point in time, the leading category for deaths seesaws between non-jihadist extremists and jihadists. Nevertheless, it does not make sense for our country to pour its resources disproportionately into preventing one type of mass murder and not the other.

In a Mother Jones study, out of 92 mass shootings collected from 1982 to present day, 60 were committed by white men. White men, based on demographics alone, would be expected to commit the most mass shootings. Yet when Americans picture the greatest threat to their well being, they picture jihadists, due to current rhetoric, disproportionate media coverage, and the contagion of xenophobia. If the Las Vegas shooting teaches us anything, it should teach us that raging white male U.S. citizens are an equal threat.

The Trump administration has focused on legislation to make it harder for Muslims to enter our country. However, ultimately we need to face the threat that originates within our borders. The government needs to provide funding and enact legislation toward domestic terrorism prevention. White mass murderers should not be dismissed as “psychologically-unstable,” or “lone wolves.” We need to realize that domestic terrorism reveals a trend, not a collection of unique cases, and shows that there is an underlying issue of rage in Americans against their own fellow citizens.