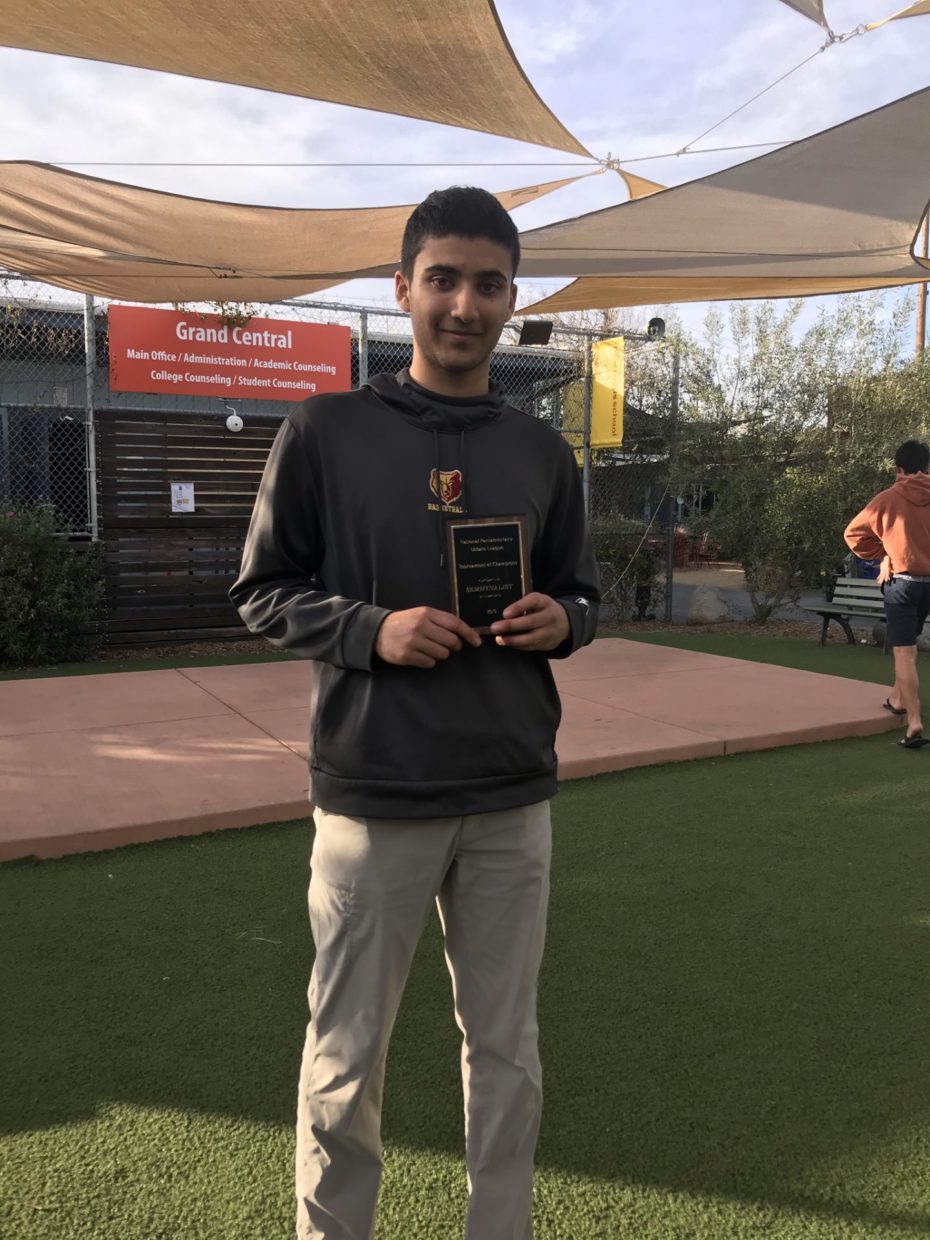 Maya Khodabakchian describes the M-A debate team in three words – “welcoming, supportive, and talented.” Here’s a behind-the-scenes look into the details of debate, told through three of the team’s members: 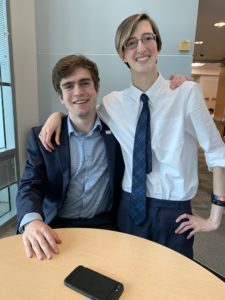 Senior Chris Ikonomou is ranked 6th nationally in debate, and has an almost endless repertoire of debate tournaments and titles under his belt, including the Stanford Debate Invitational — one of the biggest Parliamentary debate tournaments in the world. He started debate in eighth grade at Hillview, and has continued his passion ever since. However, he states, “I was actually terrified of joining the team,” as current captain John McBlair had just returned to teaching, and the team was, as he described it, “a small after-school club with mostly seniors.” It was only after his mom encouraged him to sign up that he joined, and was the only freshman on the team.

He stated that his favorite part of debate is rhetoric and speaking, explaining “I have so much fun creating a narrative and truly reaching people through my speeches to persuade them. It’s so empowering.” The most interesting issue he’s ever had to debate on is CRISPR, a gene editing technology, as it’s interesting to see “where treatment for genetic disease is going and how the future could be.” However, his “nemesis” topic area is international relations, especially with conflicts in the Middle East. He stated, “It’s difficult to wrap your head around all the nuances of the area and its history, and I’m always nervous that I’ll misrepresent what’s happening.” He added, though, “Luckily my partner [Andrew Gordan, a junior] always knows what’s going on.”

He expanded on the negative aspects of debate, as he thinks “it has a large potential to become clique-y and exclusive, particularly regarding the outer debate community and other teams.” He stated that there can be intense competition between teams, but added “I’m lucky the M-A team has focused so much on being a family.” M-A’s debate team has had notably successful year, and Ikonomou attributes this to multiple factors. There are about 50-60 kids taking the class and attending the after-school ‘club’ practice, and their dynamic “has been really collaborative.” He explained, “Even when people weren’t attending tournaments, they were writing cases and doing research for the teams that were going, and would even attend tournaments they weren’t competing in! Everyone on the team cared about everyone else and wanted to help and make the team successful.” The organization skills of the team ‘manager,’ Lizzy Young, also helped make the team run smoothly. Ikonomou explained that tournaments are “more likely to let more of our teams in because we pay and send in forms on time.” He added, “We would bring over half a dozen varsity teams every time and break most of them every time!”

Ikonomou’s favorite tournaments from his last year on the M-A Debate Team were the Santa Clara University Dempsey-Cronin Invitational this fall and the one at Stanford this past winter. He explained, “Both are huge tournaments and there’s so much time to bond as a team and have fun.” Ikonomou will graduate along with M-A’s class of 2019, and plans to attend UCLA in the fall. He stated, “I hope we continue to grow and have success even after myself and all the other seniors are gone.” With his M-A debate career coming to an end, he doesn’t think he’ll continue to compete in debate after high school, but said he is planning on hoping to “coach a local team (around where I’m going to university) and judge rounds if there are local tournaments!”

Sophomore Maya Khodabakchian started seriously debating last January, a year and a half ago, as a result of her friends on the team encouraging her to join. When asked about the aspects of debate she loves, she stated, “I really like the fact that I have a basic understanding of the majority of current events happening around the world. I also have an easier time empathizing with people ‘on the other side’ of the argument … I’d argue bipartisanship is something that is severely lacking in the world today.” She added, “On the other hand, I absolutely love the people and the team itself; it’s welcoming, it’s supportive, and it’s talented.” She reflected, stating, “I would never have gotten anywhere without the fantastic people that make up the debate team,” also describing the coaches as “integral” to “every move the team makes.” Her favorite issue that she has debated on so far has been tech policy debates, but she dislikes arguing that global warming “isn’t as bad as it seems, isn’t as important as other issues, and/or is already too far gone.” She describes debate as “a very up and down experience — there will be days when you get out of the round and feel great, and other days where every single round seemingly goes terribly.” The hard part, she explained, is “telling yourself that the bad rounds are just ways to make progress,” and winning every round isn’t feasible. She described another downside of debate – “the more advanced you get, the more exclusionary it gets.” Advanced debate is “incredibly technical” and even creates “a sort of segregation in the debate community.”

She attributes the team’s success this year partly to its experienced team members. She also explained how having debate as a class means that they “have a lot more time to practice skills … and bring, like, a million teams at every tournament … Statistically, one of us has to break, right?” (In debate, the term ‘breaking’ refers to a student doing well enough in preliminary rounds to continue onto the elimination rounds.) She even stated that other teams “have had to walk over each other because there were too many M-A teams in the break round.”

Personally, Maya feels that, so far, her biggest accomplishment has been getting to octos at Santa Clara University and Stanford. At Stanford, she stated that there was a “huge turnout” from the team. She explained, “You could always, in between rounds, go and grab a snack with another team, discuss rounds, and just spend time with others.” She also explained that the debate topics “weren’t too predictable,” which “always makes for a great tournament.” Although she didn’t personally compete at the TOC, or Tournament of Champions, it was one of her favorites because she got to observe and learn from the best debaters in the circuit and support her team at the same time.

Looking into the future of her debate career, Maya recognizes that since she’s only a sophomore, she “has a long way” ahead of her. But she thinks that if there’s a Parli team in college, she wants to join. She explained, “I definitely want to stay politically aware, and debate will probably be the way to do that.”

Sophomore Sathvik Nori has been on the debate team for two years; after doing a little bit of debate in middle school, it sparked his interest and he decided to join. His favorite part of debate is “nerding out about obscure theories, jargon, and philosophy.” This year, he finished ranked 3rd in the nation and qualified for semifinals of the TOC as a sophomore. Last year, he was the first freshman to ever automatically qualify for the TOC. Although he has participated in many tournaments, his favorite is the NPDI tournament at UC Berkeley, stating, “It is very well-run, and lots of people come.” When asked about what made this year so successful, he stated, “We have a lot of people on our team this year, and we all do well. We all contribute and help each other out when it’s needed.” Although Nori has a few more years left at M-A, he stated that debate is something he’s looking to pursue in college. He added, “When I graduate, I also look forward to giving back by judging high school debate and helping to coach.”