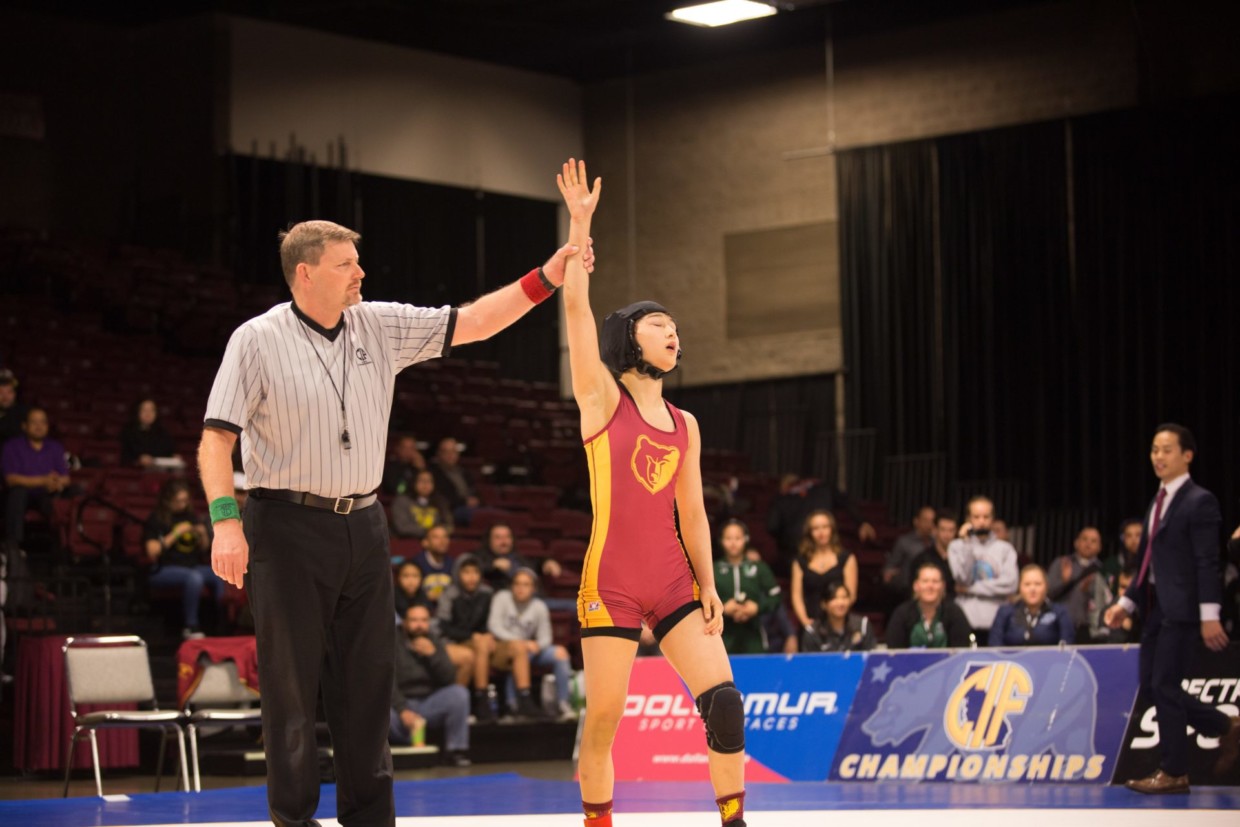 Hundreds of wrestlers from all over the state came to the Visalia Convention Center to compete after placing in the top three of their respective regional divisions. There were 193 schools at the tournament, all of which brought strong wrestlers who were determined to make their mark at the 2017 state championship tournament.

Five wrestlers from M-A qualified for the tournament, including sophomore team captain Lauren McDonnell and senior Chelsea Wilson, both of whom won their divisions at the Central Coast Section (CCS) championships.

Freshman Anna Smith was the first ever freshman to qualify for state championships from M-A, and sophomores Fola Akinola and Abby Ericson also competed at this high level. 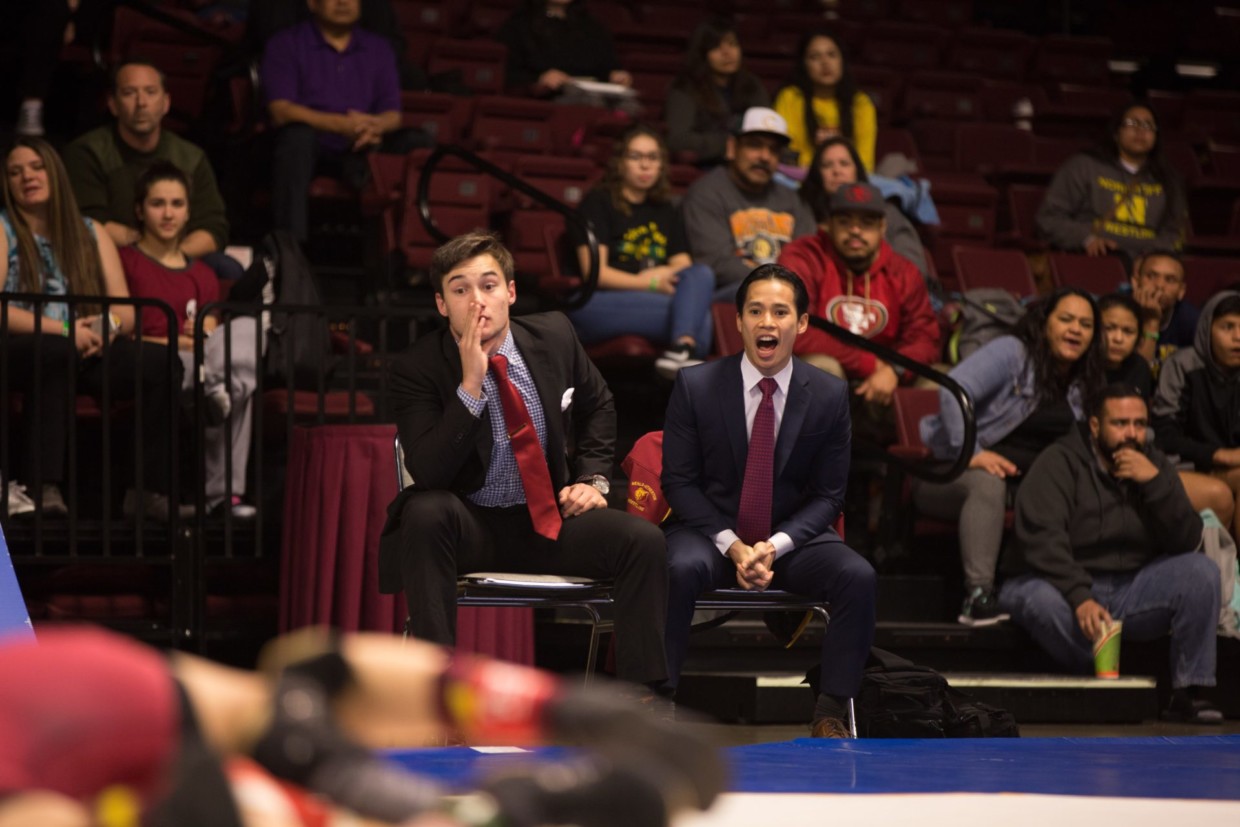 Coach Hoang watches the Bears compete, along with Smith’s brother who is a former M-A wrestler.

After CCS championships, these five wrestlers put in dozens of hours of extra work to stay in shape and get ready to doing their best at the state tournament. Although the rest of the varsity team did not continue training so vigorously, the entire team traveled together to state championships to support the five members who wrestled.

Coach Phil Hoang said, “I was exceptionally glad to see the amount of support we had at this tournament. We brought a small crowd with us, but I could hear them at each corner of the convention center.”

The success of these wrestlers is even more impressive given the fact that 2017 is only the second year M-A has had a full roster for its varsity girls team. 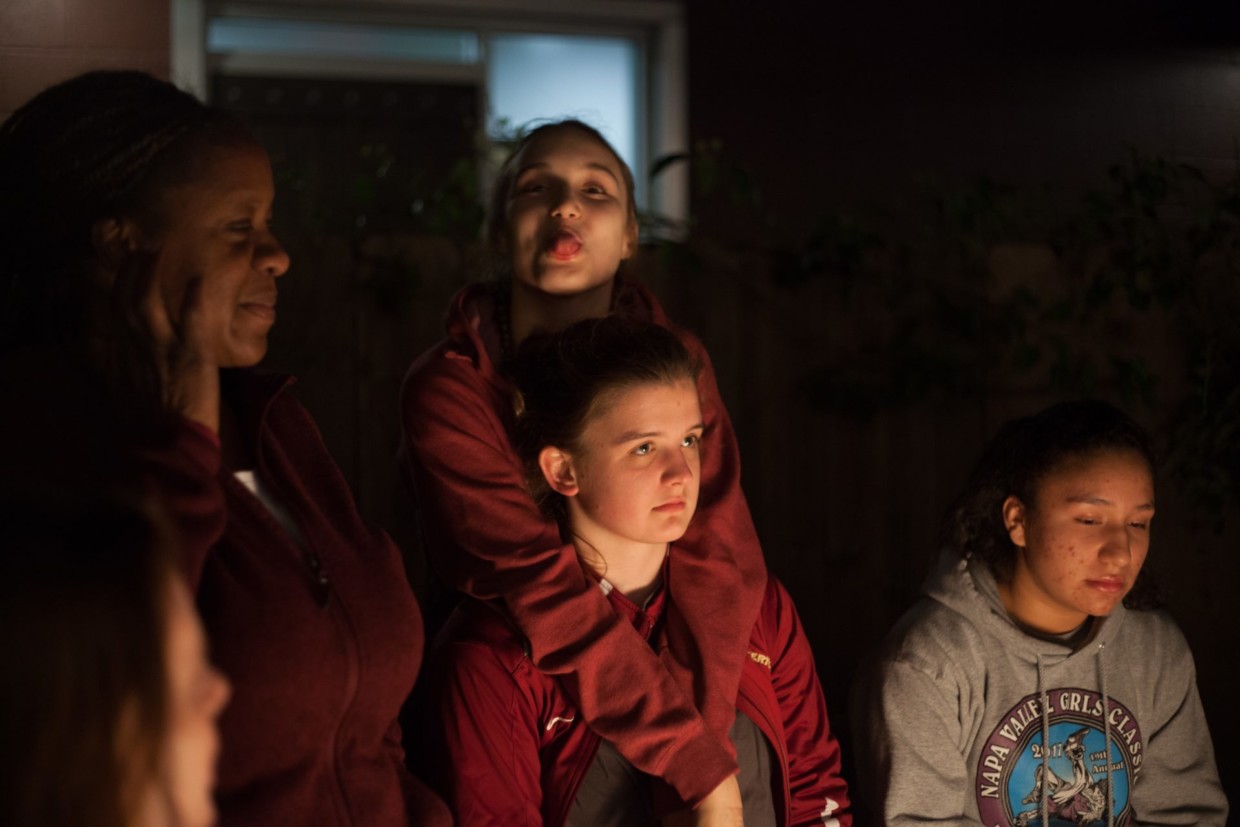 Smith having fun with Ericson at a team dinner during the tournament.

As the tournament got under way, the Bears proved that they were there to leave everything on the mat. Smith wrestled with confidence despite her age and earned a place in the top 16 State bracket.

McDonnell also completed the tournament with a 1-2 record and ended up in the top 16.

Ericson and Akinola both placed in the top 10 of their divisions, Ericson with 13 team points and Akinola with 13.5 points. Ericson ended with a 4-3 record for the weekend and earned an amazing 6th place finish. Akinola also showed immense grace under pressure, winning three of her five matches and ending fifth in the state in her weight class. 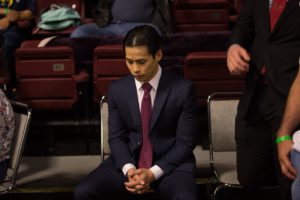 In addition to her successful top five finish, Akinola was honored with a special award at the tournament, the CIF Pursuing Victory with Honor Award. She was recognized for outstanding character, sportsmanship, and integrity, all of which are CIF core values.

Every wrestler at M-A had unprecedented success at state championships, including Wilson who became the first wrestler from M-A to ever win a state championship title, and the only CCS wrestler to win state. She came into the tournament seeded first, and despite the pressure, she fought her way through seven tough matches without a single defeat. 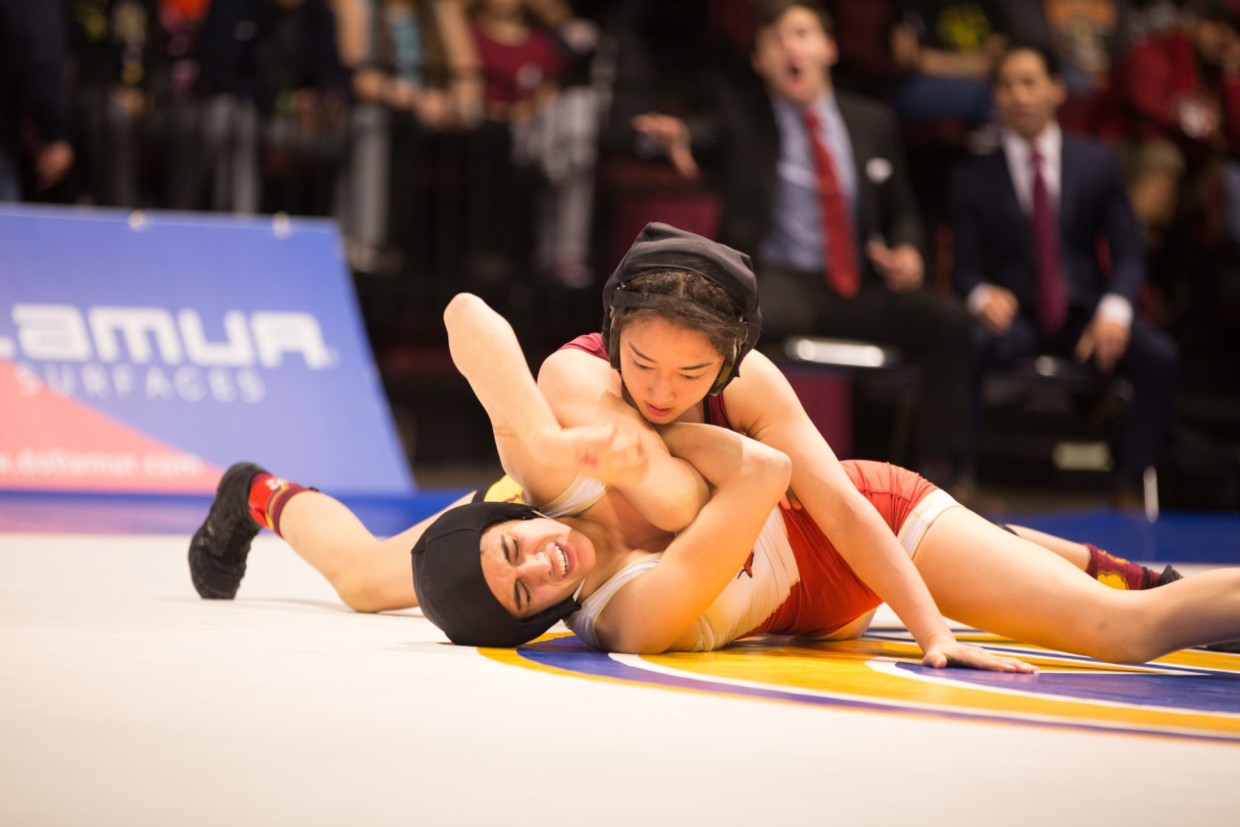 As a senior, Wilson leaves an outstanding legacy behind her as M-A’s most successful wrestler ever, male or female.

Hoang has been with Wilson since she started wrestling, and said, “She’s been a competitor since the first day she entered our room to the pin she earned to win her State title. I think she helped pioneer what each of these girls can accomplish in the course of 4 years. A state title should be something every M-A wrestler strives for. I think these girls will work harder than ever to achieve that goal and our competitors should be working hard to keep up with them.” 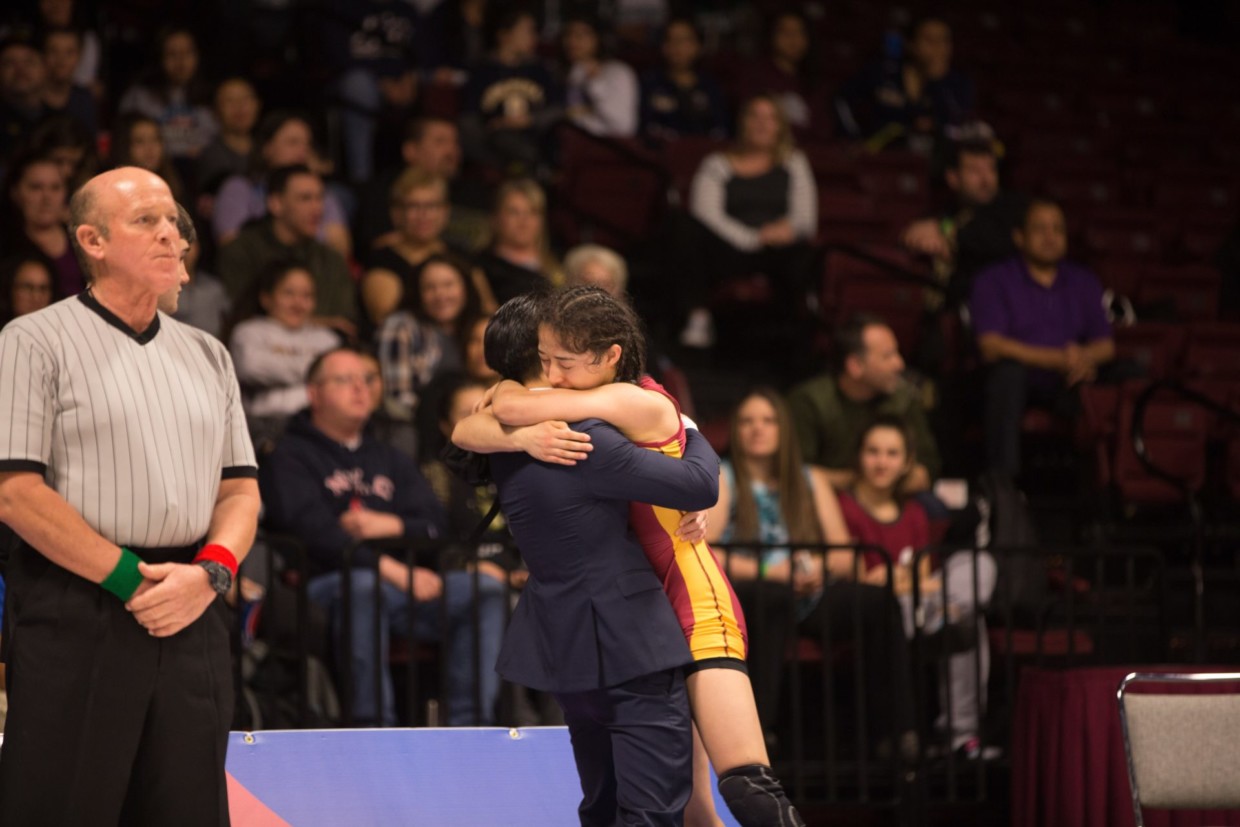 Wilson and Hoang embrace after her victory.

Each of the Bears who competed at state helped M-A place tenth out of 193 teams at the tournament, an outstanding accomplishment. The success that M-A’s varsity girls wrestlers had at the 2017 state championships was a result of grueling training and unparalleled dedication to their sport.

Hong added, “Qualifying more than one wrestler for the state tournament is an accomplishment in and of itself. Qualifying five (almost seven) is a dream, but also a testament to the fact that their hard work is paying off. Placing in the top 10 out of 198 schools means M-A is in the top 4% of the state-level teams and 1% of all teams in California. Statistically, this group is an anomaly, but when you look at how hard these kids work you would expect them to be somewhere up there.”

As the team looks forward to next year, the success of 2017 will remind them just how rewarding their hard work can be.