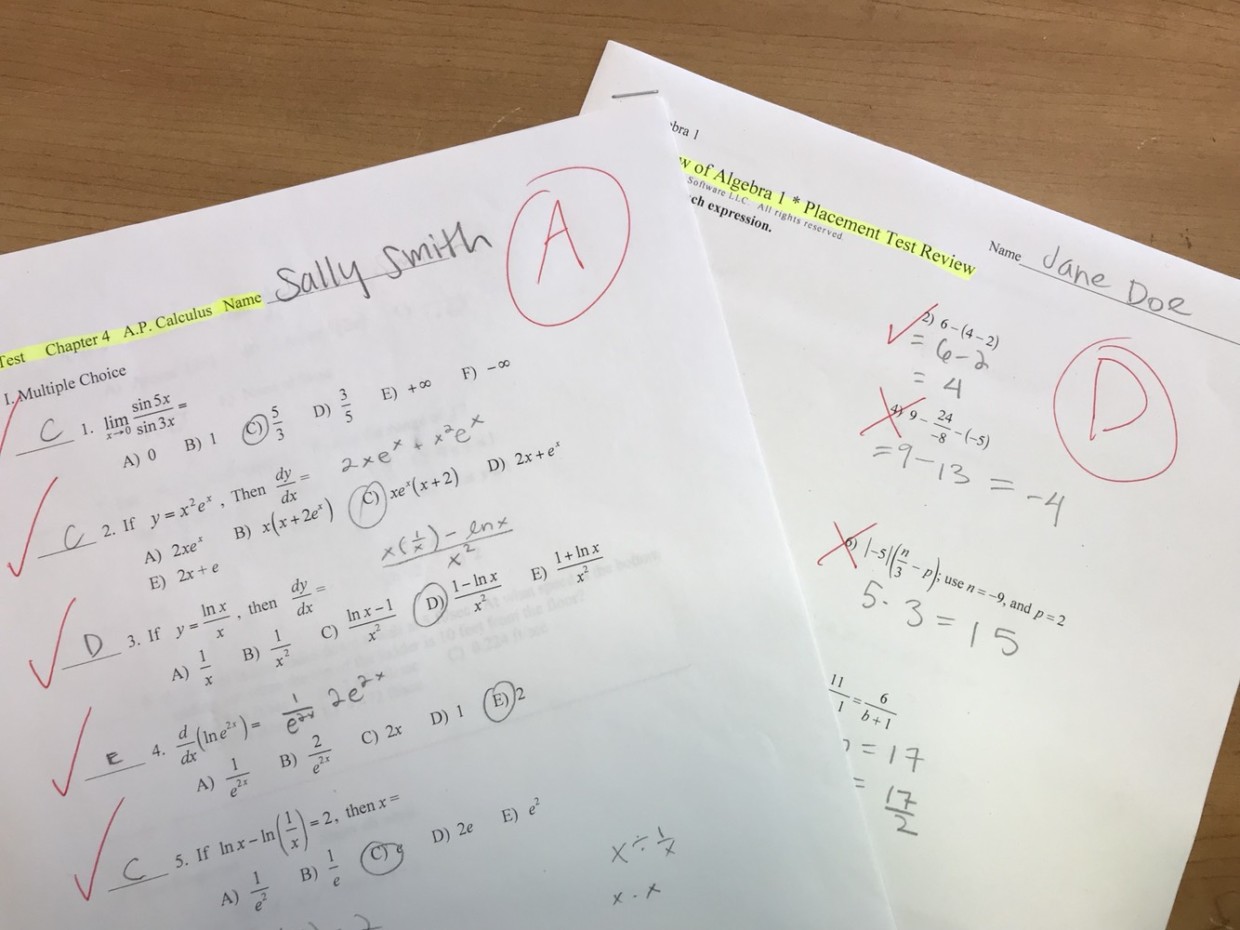 Math at M-A: Something Just Doesn’t Add Up

Editors’ Note: This story is part two of the ongoing series, A School Divided.

When do you think you chose the math class you’re in? You’re probably wrong. For most of us, it’s not decided in high school at all. Or middle school. Or elementary school. If you’re like most, your math class was decided when your parents moved here.

By the time you get to high school, you hardly give a second thought to the different paths that brought M-A students together, least of all the different opportunities that M-A students received before their first walk down Pride Hall. Yet while M-A is an exceptional school and provides countless opportunities to its students, it can’t change the level at which you enter freshman year.

A parent stated that, “my children were promoted from [Ravenswood] in 2013. When they went to Menlo-Atherton, they felt cheated by the Ravenswood School System, because they were not prepared to take algebra or A-G classes.”

This divide between districts is best seen through the math levels available to students. Menlo Park and Los Lomitas provide classes for struggling and accelerated students, creating tiers of classes such as honors and support. Ravenswood and Redwood City have just one math class a grade.

Emily Egbert, a teacher at Costaño Elementary School in East Palo Alto, says, “They all take the same class which is ridiculous. Some need that class but others need a higher or lower one. At our site we offer intervention and enrichment after school two times a week. The ones that are ready can take Algebra 1 after school which means they are taking two math classes. But there is no intervention during the day which I see as a major problem.”

For students in Menlo Park, this division begins even before students reach middle school. In fifth grade, they take placement tests, then have the potential to take sixth grade math if they score highly enough. Similarly, students in the Las Lomitas district are on track to Geometry in eighth grade without any summer courses. A simple test students took in elementary school has the power to put them on the fast track to Calculus their senior year of high school.

Senior Elley Goldberg stated that “I think we took a placement test in the third grade, where they placed you into normal, medium and advanced levels [of math classes]. I’ve been on this track the entire time, so my elementary school self decided which class I would take now. I wouldn’t say that I really had to work harder than anyone, this was just the logical progression.” 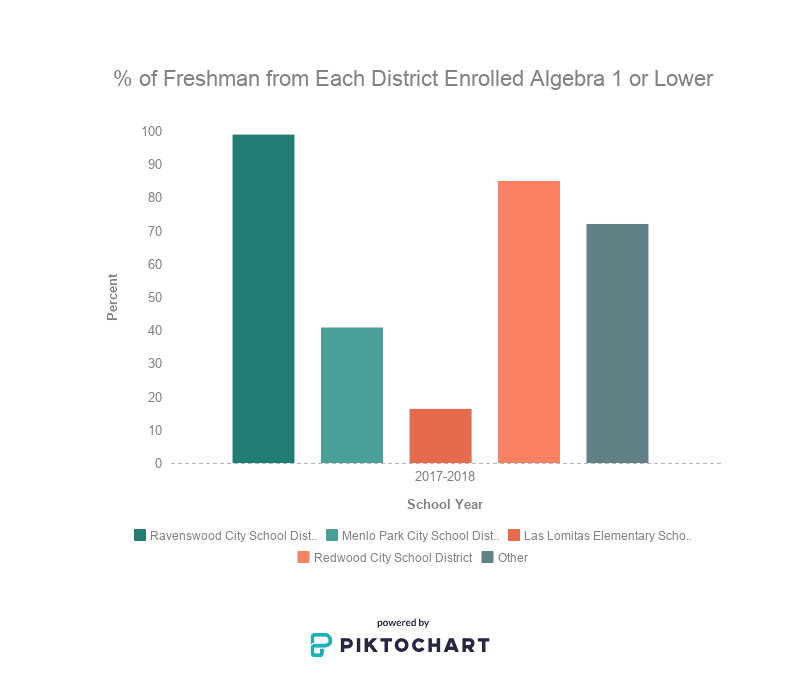 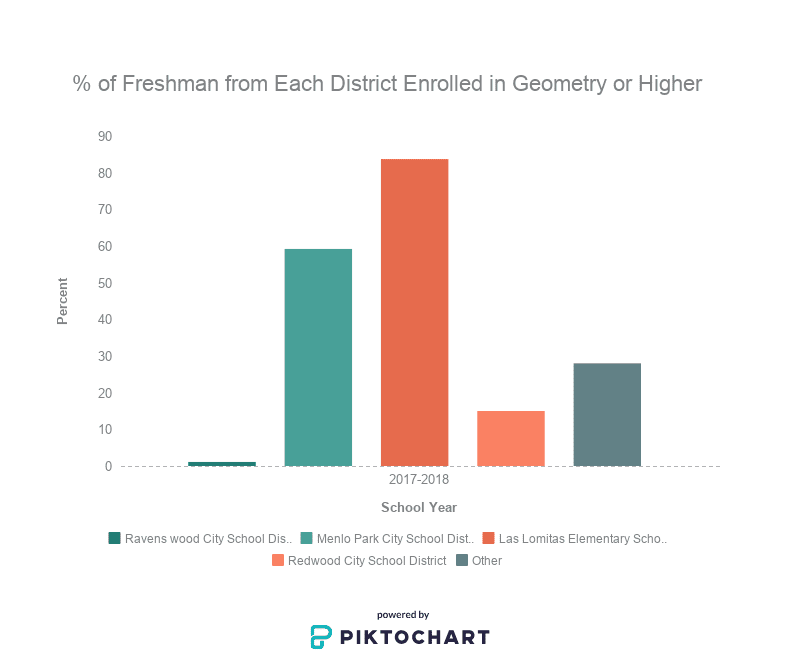 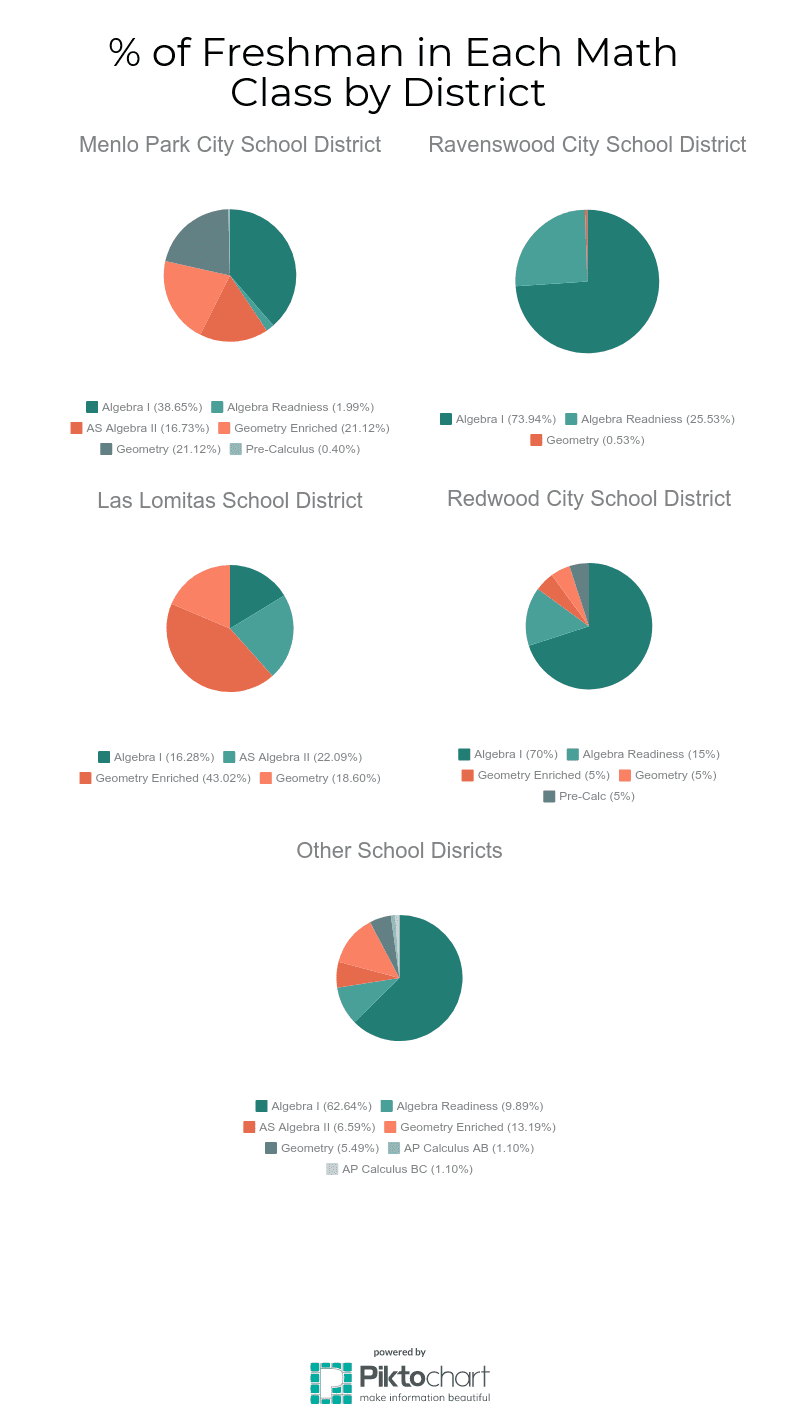 Manuel Delgado, an M-A math teacher says that in his nine-year career at M-A, “no, I haven’t seen any change in how prepared the freshmen are at the beginning of the year. Out of a class of 25, I’d say maybe 5 are prepared or at grade level. And I’m talking about kids who don’t know how to add positive and negative numbers, sometimes positive and positive numbers.” Delgado went on to say that “the kids who are at grade level, the 5 out of 25 are all…kids from La Entrada and Hillview.”

Unfortunately, the stratification doesn’t stop once students take Algebra I. Delgado feels that “there is a pressure, even [as a highschool teacher], to pass kids on and if you don’t it’s going to be hard for you as a teacher. The system has been set up to where the [middle] schools are just passing kids on. They aren’t getting held back they just keep progressing on and so when they hit high school it’s the first time they’re hit with failure and then they don’t have a chance to graduate. It’s not the teachers at all it’s the pressure of the system to pass the kids. Nobody wants to talk about it.”

As a final note, Delgado mentioned that “it’s not something [the teachers] are doing wrong, it’s just the culture. It’s a loophole that continues the middle school system. And the kids don’t even know.”

In April 2017, Ravenswood City School District compiled statistics for students coming from their middle schools and found that these students were far less likely to complete the A-G requirements than any other peninsula districts, as seen below. These are a minimum set of courses students must pass with a C or higher to gain admission to any California state university, many of which are convenient, affordable options for higher education. 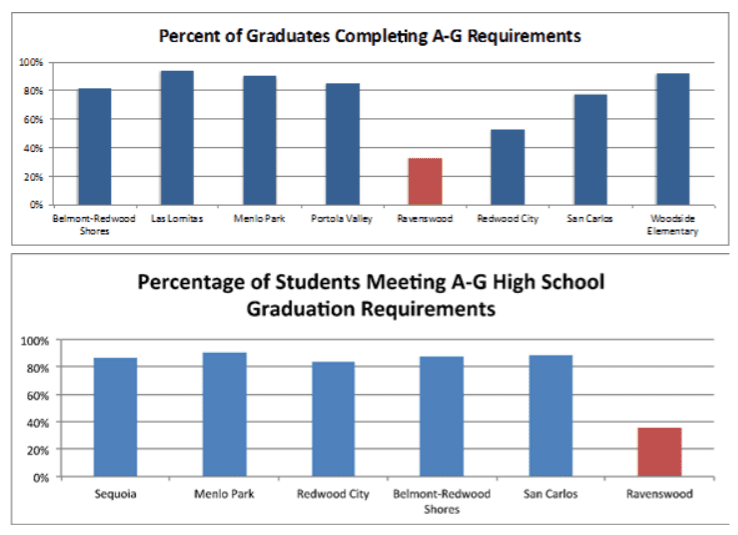 The chart above indicates that only one in three Ravenswood students is prepared to graduate high school and enter college. To counteract this, the district outlined an ambitious plan for the 2018-19 school year called the “Ravenswood Comprehensive Middle School” which hopes to get more students ready for the challenges at M-A and beyond.

These electives and extracurricular development opportunities are certainly a first step, but they may be just that. A crucial part of school funding is the ability of each district to raise extra money from parents, grants, and outside donors. The Menlo Park-Atherton Education Foundation brings in extra money for MPCSD, including 3.6 million dollars for the 2016-17 year. Likewise, the Ravenswood Education Foundation (REF) takes outside funds and uses them to enrich school programs. However, the support that students receive at home is incomparable between Ravenswood and Menlo Park or Portola Valley. The below graph shows the high rates of homelessness, low income families, and English language learners in the Ravenswood district. Even if students have the potential to excel in the classes provided by the new middle school, they may not have the means to focus on homework or get help outside of the classroom. 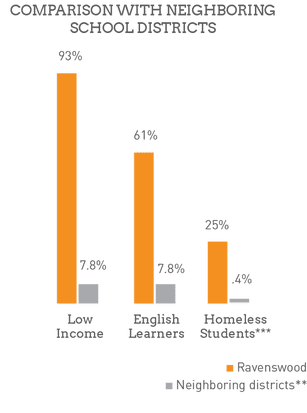 Similarly, another potential cause for the stratification of these distinct districts is shown through the average budget per capita, or per student. On average, the Ravenswood District spends $13,389 per student annually. While this amount exceeds the state average, it falls about $2,000 short of the San Mateo County and MPCSD averages and almost $6,000 behind Las Lomitas, with an average annual spending per student of $19,000 per each individual student.

A student’s district has clear effects on what they can achieve once they get to M-A.

Therefore, getting help to students outside of school is one of the hardest challenges to tackle, but it may be the most important. One step towards equality is Senate Bill 359 which, according to John Fensterwald of EdSource, helps in “providing all students equal access to courses culminating in Calculus in their senior year, giving them an advantage in admission to the University of California or a head start in majoring in science or engineering.”

Bill 359 is dubbed the Mathematics Placement Act and was supported largely by the Silicon Valley Community Foundation. Legislature alone cannot fix inequality in our middle schools, but maybe this bill is a turning point that will help every student reach their full potential at M-A and beyond.

By The Numbers Community News ravenswood Top Stories One Comment