Coach Parks Field felt completely normal on Tuesday night, as the bleachers filled up and the sun set behind the trees to create a perfect scene as M-A took down St. Francis 11-8. The Bears now improve to an impressive record of 6-1 on the year, with their only loss coming against Los Gatos all the way back on April 17.

Head Coach Steven Kryger has been very pleased with how the season has started, “they work really hard, they’ve got a really good IQ, and they are continuing to get better.” Kryger has also been impressed with the high level of team chemistry in an unprecedented year, “this has been one of those teams that is a lot of fun to be around, they’re really good to each other and they really care about each other.”

Although commenting before the game that St. Francis should be a great test for the Bears, everything that has been going well for this team in the previous games translated into this one.

The Bears opened up the game firing on all cylinders, they went up 2-1 a little less than halfway through the first quarter. St. Francis quickly struck back, scoring two goals to make it 3-2, and without a series of saves by senior goalkeeper Kevin Shvodian, the score easily could have been four or five to two going into the second quarter. Thankfully for the Bears, Shvodian made a couple acrobatic saves while senior Nico Arizini slotted in a goal to make it 3-3 at the end of the first quarter. 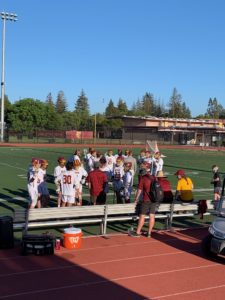 M-A takes a timeout midway through the second quarter.

M-A opened up the second quarter trying to keep as much possession of the ball as they could. Headlined by senior Marshall Spurlock and junior Marcello Battista, M-A had control of the ball in the Lancers half for the first couple of minutes. Eventually, the Lancers got the ball back and sustained an attack the other way to make the score 4-3. Almost immediately, St. Francis scored again, taking all of the momentum away from the Bears. It was Battista who made a couple crucial plays throughout the middle of the second quarter that kept the Bears in the game. Battista wove through the defense and scored to make it 5-4, while also playing great defense by slapping the stick out of a Lancer player’s hand up directly into the air. Battista then scooped up the ball and drew a foul on the other side. Even with Battista’s second quarter performance, M-A still found themselves down 8-5 when the referee blew his whistle for halftime.

At halftime, M-A was not panicking, they were frustrated with the score, but they were motivated to talk it out and improve in the second half. The chemistry that has been developed throughout the season was definitely existent with seniors on the team stepping up to motivate players to come out stronger in the second half as a team. The second half was a completely different story from the first one as it was absolutely dominated by M-A. The Bears scored six unanswered goals to go on and win the game 11-8. When asked about what contributed to the turnaround in the second half, Spurlock said, “Kevin and the defense did a great job not even letting in a single goal in the second half, and our offense started to possess the ball for longer while making less mistakes near the end.” Spurlock added, “we kept making a lot of mental mistakes earlier in the game, and we knew that we just needed to go out there and put forth our best effort. It was a mental and physical game, and the better team came out on top.”

M-A will look to improve their record to 7-1 on Friday against Palo Alto, who currently sit in 5th place in the SCVAL league, while the Bears hold 3rd place. The game starts at 5:30 at Palo Alto High School.