The award-winning M-A Bands and Orchestra, a dance lesson from a nine-time U.S.A. Dance champion, a Jazz Café, disco ball, and a live auction made the 32nd annual Big Band Dance a huge success.“It’s the perfect date night!” joked Jazz III pianist and vocalist Shane Turner, a junior at M-A.

Unlike other school dances, Turner explained, the Big Band Dance allows students to perform for their peers. On top of this opportunity, with an audience consisting of children kneeling on cushions sprawled out in front of the stage, parents laughing, and grandparents dancing, Saturday night’s music brought a multi-generational community together.

The night began with Jazz III’s rendition of “Caravan,” composed by Duke Ellington. Next, senior vocalist Diana Gruber took the stage with the band to perform “Blue Moon,” dazzling the audience with both her voice and stage presence. Following the first set were popular performances of “What a Wonderful World” and “Twist & Shout” by the Concert Band. At 7:40 p.m, the Jazz III group returned to the stage and performed three more songs before a raffle.

An intermission of sorts began around 7:55 p.m. with an announcement of several raffle winners. Thanks to the raffles and auction items such as “Maestro for a Moment” (the opportunity to conduct the M-A Concert Band or Orchestra at the 2017 Spring Concert), the music program was able to raise around $20,000. Music director Kent Kurrus explained that the money would go toward funding travel to festivals and competitions and purchasing new equipment.

Kurrus, who directed the Big Band Dance this year for the seventh time, is confident that the music program achieved its goal and played good music, and he is looking forward to next year. 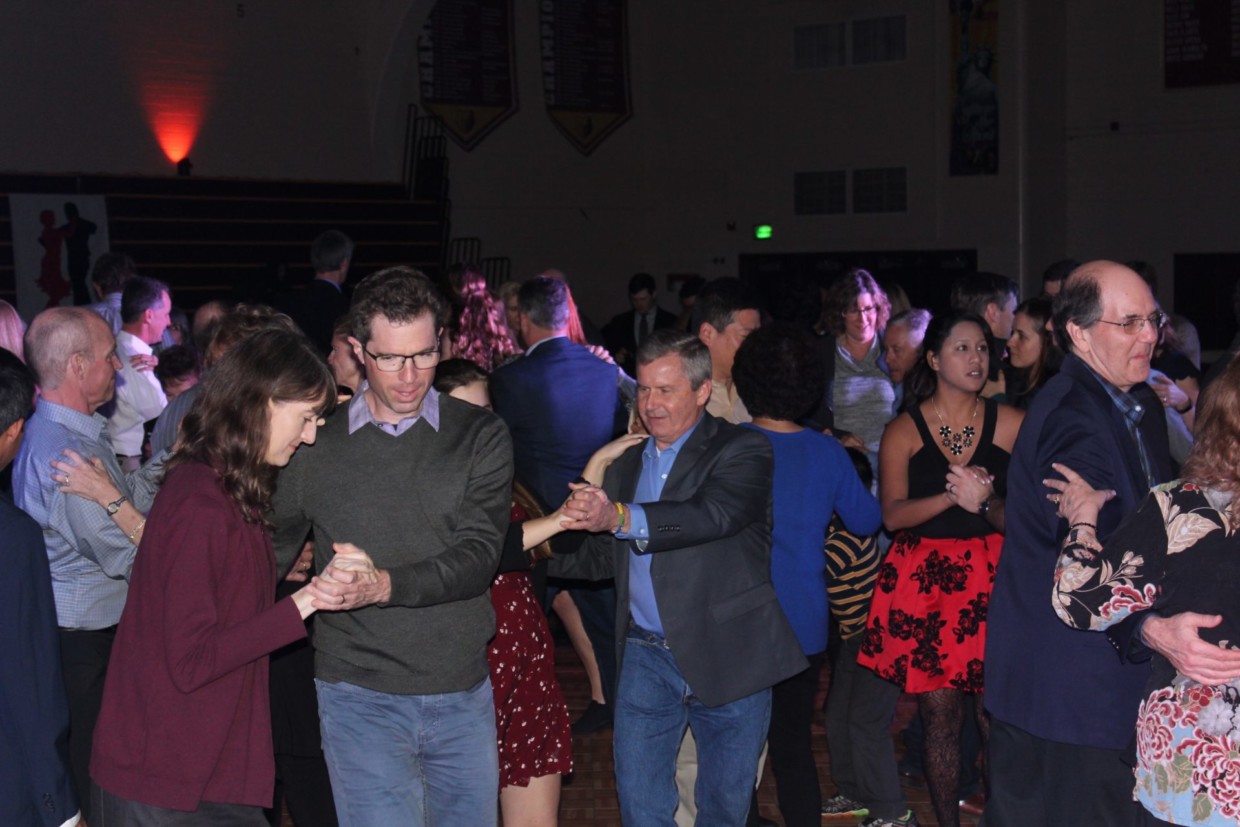 At 8 p.m., nine-time U.S.A. Dance National Champion and instructor James Kleinrath and his partner Melody Singleton took to the floor to teach M-A students, parents, and grandparents alike a thing or two about social dancing. Originally a dentist, Kleinrath became a very avid amateur dancer when he sold his dental practice around 17 years ago. He now teaches ballroom and social dancing and continues to compete with his dance partner of 20 years, Singleton. Reflecting on his third participation at the Big Band Dance, Kleinrath joked that he kept coming back because “they kept asking me,” but then ensured that he loved the enthusiasm of the M-A crowd and really enjoyed teaching here.

Following the dance lesson was a performance by the Orchestra, which played the classics “It Don’t Mean a Thing (If It Ain’t Got That Swing)” composed by Ellington and Irving Mills,“Someone to Watch Over Me” by George and Ira Gershwin,“Victor’s Tango” by Vanessa Fanning, and “Satin Doll” by Ellington.

Jazz III returned to the stage at 9:20 p.m. and began the set with “In the Mood.” Then came trombone player Sarah Tiemann’s favorite song, “Who Walks In, When I Walk Out,” a duet between Turner and Gruber. Finally, the group performed another rendition of “Someone to Watch Over Me” and finished with Gruber’s favorite song, “The Lady is A Tramp” composed by Lorenz Hart and Richard Rodgers and arranged by Dave Wolpe.

Gruber has been singing for eight years and performing with the band for “a semester… and a week,” she joked.

After a few final announcements, Jazz III played the last songs of the night. “Flight of the Foo Bird” featured solos from juniors Chris Iyer and Selim Karahan on the trumpet and alto saxophone, respectively. “Moonlight Serenade” with a solo from junior Nikita Manin on the clarinet finished off the night of music.