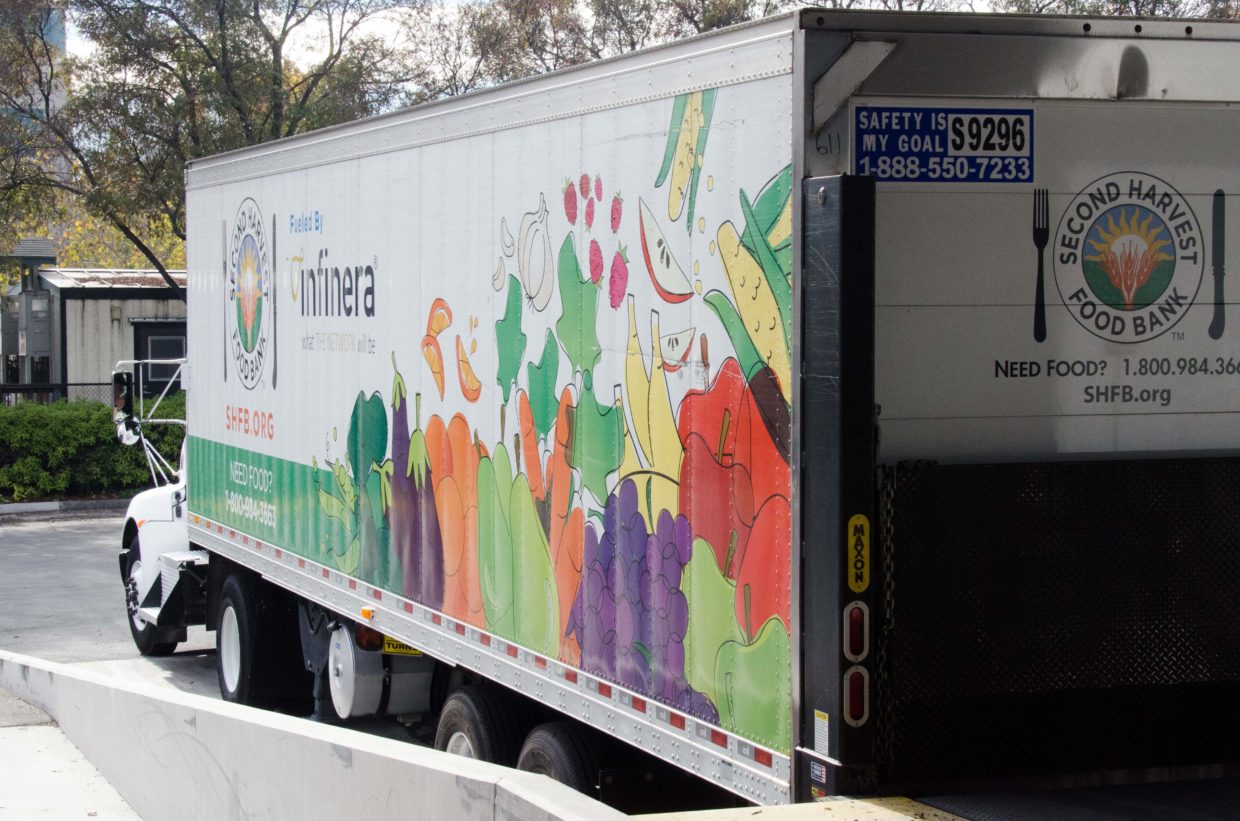 Behind the Scenes at Second Harvest Food Bank

Countless people living in the Bay Area cherish the holidays as a time to give thanks, gather with family members, and share special meals with loved ones. For many, these meals are the best part of the season — a chance to gather together to share seasonal treats and indulge in family recipes. But what if this food was not guaranteed? What if, on Thanksgiving, the question you had to ask yourself was not ‘pumpkin pie or chocolate cake?’ but whether you would have anything to eat at all? For nearly 25 percent of San Francisco and Marin County residents, hunger is a very real threat. 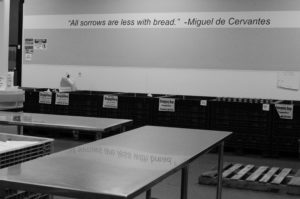 According to the local nonprofit organization Loaves and Fishes, it takes an annual income of more than $82,000 for an average family to pay its bills and provide food consistently. To qualify for CalFresh, or the Supplemental Nutrition Assistance Program in California, families of three must have a gross income of at least 200 percent of the Federal Poverty Level, meaning $40,320. This income gap leaves many families disqualified for CalFresh but still struggling to provide. 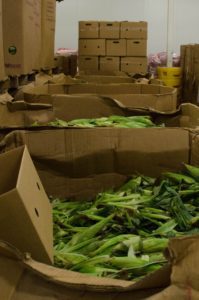 In Silicon Valley, the average cost to rent a one-bedroom apartment is $2,300 a month, leaving little money left for many families to spend on fresh, healthy ingredients. Many turn to unhealthy fast food, or simply go hungry. The SF-Marin Food Bank calculated 47 million ‘missing meals’ per year in San Francisco and Marin counties. After adding up all the meals needed in these areas and comparing this amount to the number of meals afforded with household income, provided by the government, or given by nonprofit organizations, the Food Bank found roughly 16 percent of meals still unaccounted for. Second Harvest Food Bank recognizes this problem and often looks at a client’s income after paying for housing, electricity, and other necessities. 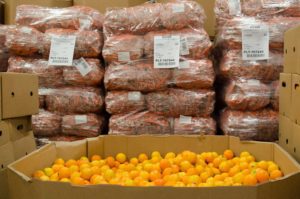 Despite the dedication to ending hunger and the earnest work being done by several organizations in the Bay Area, hunger remains a profound issue in our community. Fortunately, nonprofit groups like Second Harvest are not discouraged by these heartbreaking statistics but work ever harder to provide food to all those in need. 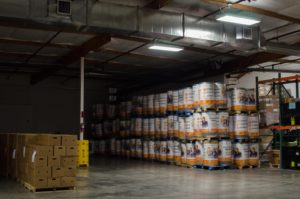 Begun on November 2, students at M-A are in the midst of the school’s canned food drive, one of the largest in the country, which donates thousands of pounds of food to Second Harvest Food Bank. The goal for 2016 is 151,000 pounds of canned food and non-perishable items, which will be distributed to local families on December 3. While these numbers are impressive, this raw data can seem impersonal and many students cannot truly appreciate the scope of the good that comes from their donations. What, exactly, does a thousand pounds of food really look like? How much produce is actually purchased with the money donated to M-A? 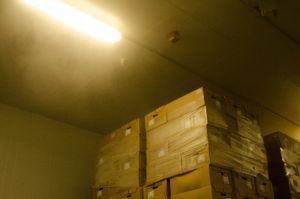 The Cypress Center in San Jose, one of Second Harvest’s facilities, is the perfect place to gain a deeper understanding of the impact of the organization, and of M-A’s own canned food drive. The Center is not a place for those in need to receive food, but rather a volunteer work space and a warehouse to store donated food as it is prepared for distribution. Second Harvest works closely with over 330 nonprofit organizations that take food from Second Harvest’s warehouses and distribute it throughout San Mateo and Santa Clara counties. 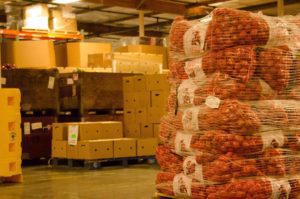 Hundreds of pounds of fruit are ready to be distributed. Credit: Evelyn Calhoon / M-A Chronicle

The organizations help needy residents from South San Francisco to Gilroy, a vast region where the demand for food is daunting. At Second Harvest, the goal is to ensure that everyone who needs a meal can get one, but even with 65 million pounds of food distributed per year, workers know that there are millions of meals still unaccounted for.

Traditionally, senior citizens have formed the bulk of Second Harvest’s clientele, and even today Second Harvest holds specific distribution days for seniors. However, another large portion of clients are families, especially those with small children. Families are often in the most need during the holidays. Bernadette White, Community Relations Coordinator at Second Harvest, explained, “Our goal for the holidays, in addition to [distributing] 19,000 turkeys, is 1.5 million pounds of food and 16 million dollars. These two in particular really help us to fill needs that we have for the rest of the year.” 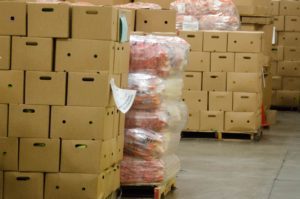 Crates of corn and bags of carrots will help many families this holiday season. Credit: Evelyn Calhoon / M-A Chronicle

Hunger does not mean homelessness, although these predicaments can certainly coincide. More often than not, hunger in Silicon Valley means that a person or family working and making a respectable salary is still unable to buy enough food because of crippling housing costs. In fact, White has noticed that in the past few years, there has been a shift in need from San Mateo County to Santa Clara County because as housing costs go up, many are forced to move to cheaper areas.

White predicted that in years to come, these same people will have to move from Santa Clara still further, to Alameda and Monterey and other remote counties. This issue is exactly why fighting hunger is so challenging, but also why Second Harvest stays so dedicated to its cause. White explained that knowing her work is never finished pushes her to work even harder. 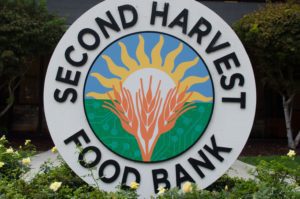 One of the key driving forces for Second Harvest is nutrition. Over 50 percent of its food is fresh produce, donated directly from farmers through the California Association of Food Banks. Produce is the most important, and often most expensive, component of a healthy diet. White believes that giving people access to fresh-picked fruits and vegetables is one of the most crucial jobs of Second Harvest. 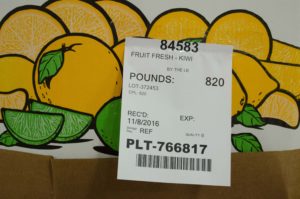 Each day, dedicated produce vehicles drive to people in need and give out delicious fresh food, which is also available on Family Harvest and senior distribution days. Before clients bring ingredients home, a large team of nutritionists talks with them to explain portion sizes, the food pyramid, and balanced diets to make sure they know how to utilize fresh ingredients once they have them. This system would not be possible without the more than 300,000 hours volunteered by people throughout the Bay Area each year, many of which are spent sorting everything from cabbages to kiwis.

As M-A is in full swing with another successful canned food drive, it is important to remember that hunger can be anywhere, from families in our own school community to software engineers struggling to keep up with high rent. During the holiday season more than ever, everyone deserves some comfort and a hot, nutritious meal. By collecting food, M-A is helping to bring just that to more than 250,000 clients served monthly by Second Harvest and its affiliates. 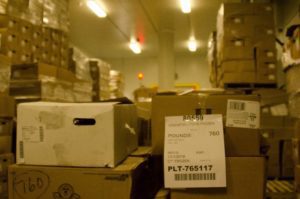 M-A’s canned food drive is one of the most impressive White has ever seen, and she said that the best way high school students can help is to never stop working towards a cause, no matter how elusive success may seem. Anyone can make a difference, whether you have a minute, an hour, a day, or a week to give. 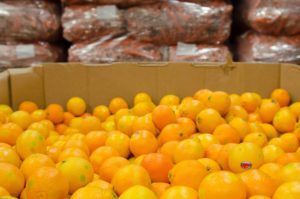 Produce is ready to be distributed to the community. Credit: Evelyn Calhoon / M-A Chronicle

The first step to eradicating hunger is making sure that no one underestimates the power of a can of soup, a head of lettuce, or the joy created by doing good.