It was an extremely hot day on Saturday as the Bears headed to Gilroy High School for the Central Coast Section (CCS) trials. The Bears ran through 92-degree heat, which felt even hotter on the track, but even with the intense heat, many runners were able to qualify for next week’s finals.

The girls 4×100 relay team of sophomores Lauren Collinsworth, Maggie Hall, and Jessica Eagle and senior Charlotte Schroeder qualified for next week with a time of 48.81 which put them in third place in school history. 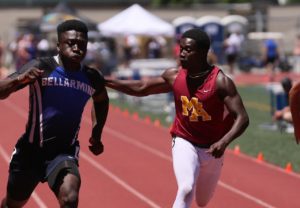 Matthews-Murphy runs neck and neck with a Bellarmine runner in the 100. Credit: John Hale.

Hall also qualified for the finals in the 200 for the second consecutive year. Senior Terrance Matthews-Murphy and sophomore Noa Ngalu both finished in the top 4 in the discus, enough to advance to the finals later this week. 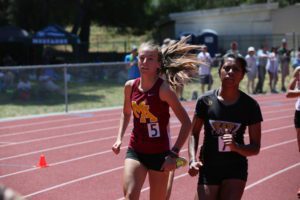 Kalotihos sets her eyes on the finish line as she rounds the final turn. Credit: John Hale.

Senior Tate Tussing also qualified for the finals as he was able to finish in the top 12 of the long jump to continue his season.

Sophomore Nick Hafer also barely missed qualification for the finals even with a foot injury. Hafer placed 15th in the 800 with a time of 2:01.77. 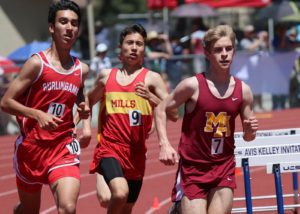 Hafer leads a pack of runners on his way to a 15th place finish in the 800. Credit: John Hale.

Eight runners qualified for CCS finals on Friday at Gilroy High School, including the girls 4×100 team, Matthews-Murphy, and Ngalu, as well as Tussing and Kalotihos.

The Bears’ season continues at Gilroy High School on Saturday, May 26. The Bears will need to place in the top 3 in their respective competitions in order to advance to the state meet. Good luck and go Bears!