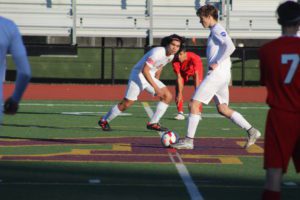 Jandeleit takes the opening kickoff with Claverie ready to burst down the field.

On Wednesday night at Coach Parks Field, the Bears ran riot over first place Burlingame, winning 3-0 to give their seniors a proper sendoff in the team’s last regular season home game. The evening began with a ceremony to recognize the seniors for their contributions to the M-A soccer program as players, leaders, and teammates. The seniors took their turns walking from the center circle to the sideline where Athletic Director Paul Snow presented them with a ball, as head coach Leo Krupnik read a written tribute for each player.

After all the seniors had been honored, the Bears huddled up for a quick pep talk and broke the huddle with a loud resounding shout of “Bears!” As part of the seniors’ special night, Krupnik constructed the starting lineup entirely out of seniors, starting seniors at every position (except goalkeeper).[slideshow_deploy id=’65344′]

Looking to get off to a quick start, Nic Jandeleit took the opening kickoff and the Bears immediately went on the attack. While their initial attempts on goal did not yield any goals, the Bears’ early persistence to find the back of the night was integral in getting a feel for the Panther defense. Soon enough, the Bears found a way through as Tobi Jacobson opened the scoring off the rebound of a blocked shot, giving M-A a 1-0 lead five minutes into the game. 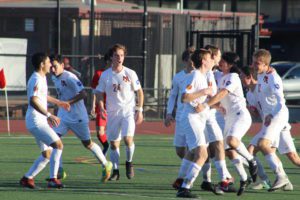 The Bears kept the pressure on throughout the half, dominating possession and finding another goal in the 21st minute by way of a Jandeleit run and tidy finish. Although they went into halftime with a comfortable 2-0 lead, the Bears refused to relent in the second half, continuing to press the Panthers for the ball and controlling the pace of the game. The second half featured a lot more rotation for the Bears with some underclassmen getting some playing time. However, the seniors played the starring roles in the game.

The back line of Reid Diamond, Jake Simon, Anthony Perez, and Ower Grierson seemed impenetrable at times, with each player making several key challenges and clearances to keep Burlingame off the scoreboard. Meanwhile, the midfield unit led by Jacobson, Jake Foster, and Imahn Daeenabi, as well as Brandon Ortega and Jesus Martinez applied constant pressure on the opposing midfield with deft footwork and smart interceptions. Jandeleit and Jean Claverie spearheaded the Bears’ attack with quick runs down the sidelines and crosses into the box.

At the end of the second half, Jacobson iced the game with a stoppage-time goal to complete a brace on the night as he slotted the ball into the bottom right corner on a counter attack. One the final whistle was blown. Jacobson headed to the center circle to perform his patented “victory backflip” celebrating the win. M-A beat Burlingame by a final score of 3-0 and now trails the Panthers by only one game for first place in the Peninsula Athletic League (PAL). 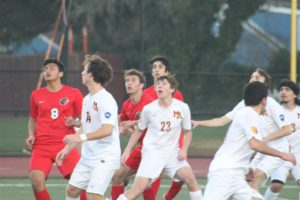 Foster anticipates the ball as he looks to head it into the box.

As the Bears prepare for the playoffs, they take some time to acknowledge how much they have improved over the course of the season. “We had the roughest preseason and didn’t win a single game,” said Claverie. However, “we kept getting better and better and most of all we all feel like an actual team now since we’ve gone through the best and the worst.”

With so much trust in each other, the Bears are confident that they can make a deep run in Central Coast Section (CCS) playoffs. Grierson said, “I think if we continue to play like we have been we will do well in CCS. We just need to focus and not lose energy.”

For now, the Bears are relishing this victory and the seniors especially can now take some time to look back at their tenures as M-A players. Claverie fondly recalls “Axel’s banger. Down 1-0 in CCS quarterfinals, he took one touch in and shot it with his left foot and it was the most glorious thing I’ve ever seen in my life. The shot went top left and we all dogpiled him.”

For Grierson, the win over Burlingame became his favorite moment as “winning that game on Senior Night was very special and is now a very happy memory.”

Make sure to congratulate your Bears when you see them around school! Their next game is Friday night at Woodside for those faithful fans who want to catch the Bears’ final regular season game. Otherwise, stay tuned for some exciting playoff action in the near future!