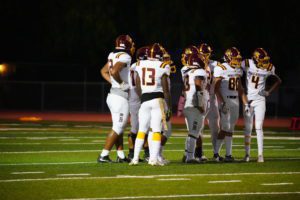 “Hindsight is 20/20,” is what senior quarterback Billy Johnson said after the M-A Bears suffered a heartbreaking loss to the Wilcox Chargers by a score of 21-20. The game came down to one crucial two-point conversion attempt by M-A that was stopped short. The Bears now have a record of 2-2 heading into their first league game next week.

The Chargers set the tone early, putting together a 6:15 minute drive finishing with a rushing touchdown to put the Bears in an early 7-0 hole. The first offensive possession for M-A ended quickly, but the Bears’ defense held strong against the Chargers’ gritty offense, getting the ball right back for M-A.

The second offensive trip for the Bears was not much better, with a Wilcox safety intercepting a tipped pass by Johnson with little time left in the first quarter.

The turnover did not prove costly, however, with M-A’s defense once again holding the Chargers. Finally, the Bears offense put together a very strong drive leading to a touchdown from senior running back Sherrod Smith. Consisting of six runs and seven passes, M-A put their offense together when they needed it most. Smith has been an incredibly productive player so far this season for the team’s offense, averaging 80 yards per game, and four total touchdowns. 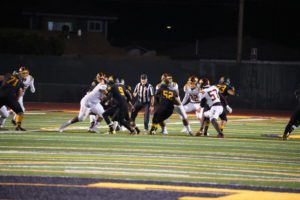 Smith got the Bears offense rolling with a 60-yard run on the first play of the second half, which led to a touchdown from Johnson to junior tight end Alek Marshall, tying the game with 9:36 to play in the third quarter. Marshall has been a breakout star for the Bears this season, he has accounted for 15 receptions, 116 yards, and three touchdowns so far this season. “Each week we are making improvements and getting significantly better,” is what Marshall said when talking about preparation for league play.

After both teams were stalled on offense, Wilcox scored their third rushing touchdown with 11:47 left in the fourth quarter, reinstating their lead of seven. After the game, junior defensive back James Gray said, “we just need to be more aggressive and rally to the ball on every play,” when talking about areas of improvement for next week.

Later on in the fourth, after both teams were forced to punt, Johnson connected on a deep ball to senior wide receiver Jurrion Dickey. Johnson and Dickey have been electric so far this season, with six of Johnson’s 10 passing touchdowns going to Dickey.

Finally, in a crucial moment, trailing by one point, the Bears tried the two-point conversion instead of trying to kick the extra point to tie the game at 21-21. Johnson rolled out to his right, and made a valiant effort to get to the end zone but came up just short, putting the game out of reach for M-A.

Later, Johnson stated, “We go out to win games. It was a good play call and I take full responsibility for it not working.”

Next Friday at 7 PM, the Bears open up league play against Half Moon Bay. Marshall said, “I feel great going into league; I think the most important thing is to start strong and have faith in our teammates.”