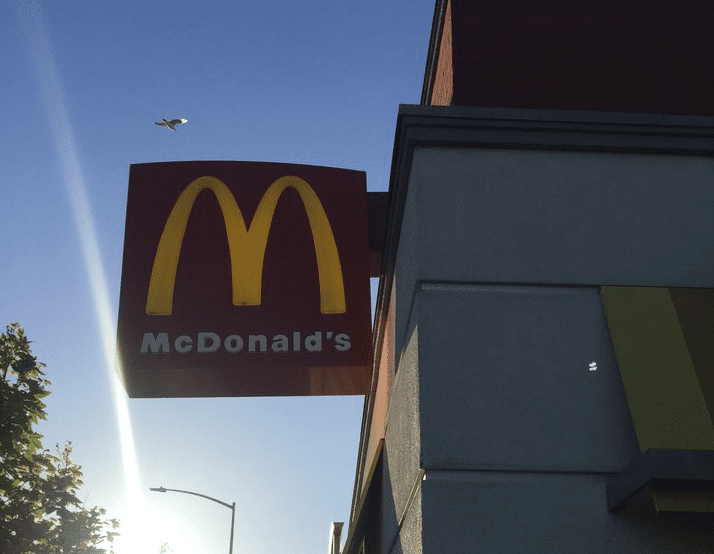 Jasper
With our last installment of Bear Bites looming, Ben and I knew we had to end the series with a bang. During our tenure as the writers of what we humbly acknowledge as the best food review series in the Bay, we’ve visited a flourishing assortment of restaurants. From high-end seafood to hole-in-the-wall Mediterranean, we’ve been unfortunately wanting in perhaps the most important, the most quintessentially American of foodstuffs: fast food.

We entered the Golden Arches on a Tuesday night, but inside, the booths were packed. The tantalizing smell of meat product and cheese substitute suffused the air – a perfect backdrop to the sizzling grills and bustling lines that surrounded us. The fluorescent lighting was brilliant and dazzling, meshing perfectly with the vibrant reds and yellows of the plastic pseudo-cushions of booths. A table set up on the side of the serving counter, scattered with metallic green confetti, proclaimed the announcement of McDonald’s new “Signature Crafted Burgers” — adding a touch of class to what is already a classy establishment. I, already knowing what I wanted, stepped up to the cash register and rattled off my order. 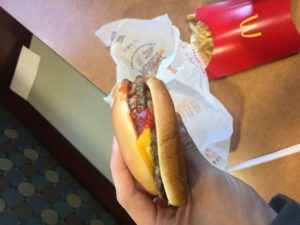 The secret to McDonald’s is on the deals; with sufficient preparation and Extreme Couponing-esque discount chaining one can really maximize their calories/dollar. And really, food is just calories: the more calories you get, the better your deal. My preferred combination is the 2 McDoubles for $2.50, with large fries (1 dollar with the coupon), alongside a free McFlurry with any purchase and a free drink with any purchase.

Ben
Although Jasper opted to take a more traditional path in regards to his food order, I decided to be a little more adventurous. Unlike him, I am, unfortunately, not blessed with the ability to go to McDonald’s every single day, so as I observed the menu I was swamped by the plethora of options – how could one small restaurant create so much diverse yet equally delicious foods to satisfy such a passionate and enthusiastic crowd of customers. Being an avid chicken lover, I was pleasantly overjoyed, although not surprised, that McDonald’s had so many options to satisfy my desires, and after a short deliberation, I settled on ordering a small box of four McNuggets as an hors d’oeuvre with a McChicken entree. Upon Jasper’s suggestion and subsequent guidance (I’m miserable with technology, even with something as simple as an app) I quickly downloaded the McDonald’s app to take advantage of the so-called amazing deals that Jasper so fervently raved about. Through this, I was able to snag a McCafe chocolate shake with my meal, something I could hardly believe even as I sipped my free beverage.

Somehow, the good folks at McDonald’s managed to cook from scratch both my and Jasper’s entire orders within minutes despite the sheer magnitude of our meals. I joked to Jasper that they must be employing dozens of cooks in the kitchen to create so much fresh, high-quality food in such little time, but he reminded me that McDonald’s would only hire the most skilled and experienced cooks to work in the heart of their restaurant, the likes of which could probably create thousands of mouthwatering burgers within an hour. Naturally, I set my sights upon the McNuggets first, devouring each juicy morsel with a vigorous voracity so fierce and bestial it even scared myself. As I snatched up the last crumbs of delicate, golden breading, the McChicken stood no chance, and soon met a comparable fate. The chicken used in both dishes was frankly the most amazing meat I’ve eaten in my life. Within each chunk I vehemently devoured, I closed my eyes and the sensations of pure, blissful ecstasy washed over my taste buds. The colors of the world seemed brighter and livelier and the uninhibited delight the delicious poultry awarded me managed to bring one, solitary tear to my eye, which we all know is infinitely more meaningful than unrestrained crying. I washed down the last droplets of my milkshake and sunk into my chair to ponder upon my existence and the true meaning of life much like the great artists and authors of the Enlightenment had done at coffee houses before me, as one does at an establishment as intellectually stimulating as McDonald’s. 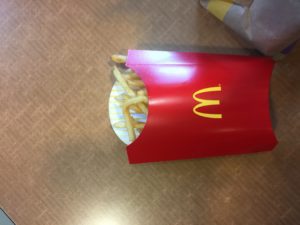 A delicious order of large fries

My first bite into my McDouble released a symphony of flavors. It’s called a McDouble because it has two patties: painstaking research has taught me that differs from the double cheeseburger in that only having one slice of cheese. But that single slice was more than enough to melt into my mouth. I can honestly say that the McDouble was possibly the best burger I’ve ever had, putting even such contenders as the Refuge or Gott’s to shame. It tasted like spun gold sprinkled over perfection incarnate, every mouthful bursting and dissolving in a superlatively flawless concoction of meat product and cheese substitute held between two perfectly bread-ish buns. My fries, too, were amazing, baked to a golden-brown crispy transcendence of texture and taste, slathered an additive amount of salt and oil.
I washed it down with a couple of gulps of my soda and moved on to my dessert course, the McFlurry. The soft-serve vanilla ice cream they use as a base is of course, incredible — it’s McDonald’s: what else could you possibly expect — I’m partial to the M&Ms version, where they mix in the candy-covered chocolates, because they add some more sweetness(always good) as well as switching up the texture, giving each bite a satisfactory crunch. It was the best possible note on which to end my meal, making my vote one rate McDonald’s a hitherto-unheard-of, but wholly deserved 6/5.

Ben
I have to say it – The food at McDonald’s was, without a doubt, the best I and Jasper have ever enjoyed. We could both tell that within each burger, McChicken, and milkshake, more than just tangible components had been used. No, the secret ingredient of every McDonald’s recipe is the meticulous hard work and love that goes into carefully crafting each meal. What made McDonald’s so special to us, and what pushed it over the edge from being a simple, all-American style dinner was not just the succulent food, but the hospitality and individual care demonstrated by both the atmosphere and staff of the restaurant. I could tell from the individual passed out and peacefully slumbering undisturbed in the booth across from Jasper and me that the primary goal of McDonald’s transcended profit; it was about making the customer feel at home. This notion extended to the nature of the restaurant’s service technique, which allowed us, the customers, to walk up and retrieve, not to mention customize, the meals ourselves, much like one would do at a family get-together. We exchanged a knowing glance and the entire catalog of our fruitful lifetime of food reviews flashed before my eyes, from the juicy pastrami at The Refuge to the flavor-packed pho of Hometown Noodle, McDonald’s outshined them all. In that moment, we realized simultaneously, as both longtime food co-reviewers and friends, that our journey had come to an end, our McDestiny finally revealed.

We walked out into the sweltering, May heat. “Well, that was a pretty good one,” I said.

Jasper slowly smiled as we watched the final rays of a Monday sun sink beneath the horizon. “It was indeed.”

We said goodbye and went our separate ways. 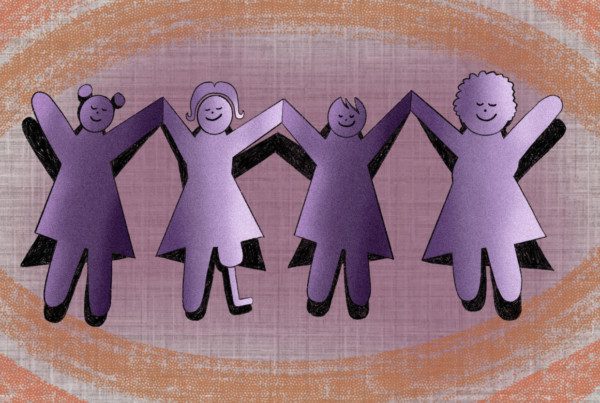 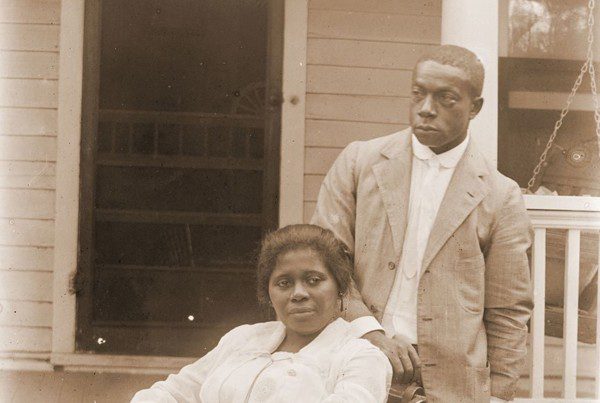