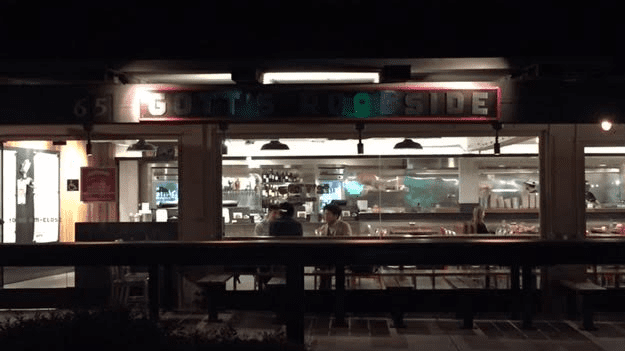 By Ben Strehlow and Jasper Fu

I will admit I have a pretty rough relationship with sleep. Anyone who knows me has probably caught me hard asleep at a time or two or ten, on my couch or in school or in a car; anywhere, in fact, except my own bed. We were supposed to be setting out to Gott’s Roadside to embark upon the next adventure of Bear Bites, all the way to exotic Town and Country, in Palo Alto. Instead, Ben found me, eyes closed and arms clasped, asleep on my couch, deep in the embrace of my daily mid-afternoon, six-hour power nap. 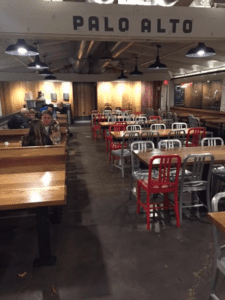 Despite being mostly empty near closing time, the ambiance was still cozy and intimate. Credit: Ben Strehlow / M-A Chronicle.

Ben was understandably upset at spending several minutes camped out on my doorstep, braving the harsh California weather while I dozed contentedly inside, and by the time we actually arrived at Gott’s it was nearing closing time. Because of the late hour, the normally packed restaurant was mostly empty, and the long lines for which Gott’s was infamous were non-existent. When I tried to claim credit for beating the rush with a masterfully crafted and perfectly calculated plan that allowed – that required – me to oversleep, Ben gave me a stink-eye, and I gave up.

The restaurant itself was quite pretty, all polished wood and low-hanging lights. It definitely had more of a focus on aesthetics than the above all practical appearance of the subject of our last Bear Bites, El Grullense, but it didn’t sacrifice anything for it. It was similarly spacious, without any sense of being more cramped than “El Greasy,” unless you were pushing ten feet tall and really needed those ceilings. During actual meal-hours (i.e., not 8:30 on a Tuesday night), it gets a lot more crowded, but even then the spaces between tables are more than wide enough to allow passage.

After ordering my food (It didn’t take very long for me to decide this time – I’ll get to that later), Jasper and I found ourselves settled in a comfortable booth nearest to the restaurant’s open kitchen. Because both Jasper and I have a propensity to engage in post-school naps, we were dining pretty late, and by the time we had sat down it was nearly 8:30 p.m. and closing time was on the horizon. Therefore, the restaurant was mostly empty except for a smattering of procrastinators, slow eaters, and nighthawks, which combined with the crackle of grease and swooshes of flames resonating from the grill area to foster a cozy atmosphere. 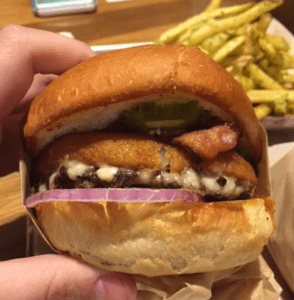 Unfortunately for me, this repose was short-lived as I dashed around to and fro like a hyperactive primate for the next ten minutes trying to take satisfactory pictures of the establishment while Jasper relaxed and enjoyed his soft drink. I’ll take a moment to inform all our beloved readers that there are many, many talented photographers with an eye for composition and art that work within the M-A Chronicle, but alas I am not one of them; I do try my best though. But enough of that, you’re not reading this to hear my lamentations so I’ll stay focused. What was I talking about again? Oh right, the food. I ordered a Western Bacon Blue Ring Burger, which is a long, fancy way of saying the “heaven burger,” because I swear to god this magnificent creation was designed specifically for me (I’m not a narcissist, I swear).

The burger consisted of, you guessed it, a medium well ⅓ pound beef patty topped with an onion ring, sliced red onions, pickles, bacon, and blue cheese. Blue cheese is my favorite food, and I mean favorite – I eat it on anything, and when edible delivery mechanisms run scarce I just shovel it into my face. Pickles are a close second: I eat them speared, sliced, whole, fried, you name it (Don’t ever even think of giving me a sweet pickle, though. I’ll either become irrationally angry or extremely depressed). Onions, bacon and barbecue sauce are true condiments that are always welcome in my stomach, and the onion ring was just a (metaphorical) cherry on top of what was already shaping up to my perfect burger. Jasper and I also ordered a basket of garlic fries to split, a fact Jasper was dismayed to learn later in the meal when I had to explain the definition of “sharing” to him, and I ordered a root beer to wash everything down. 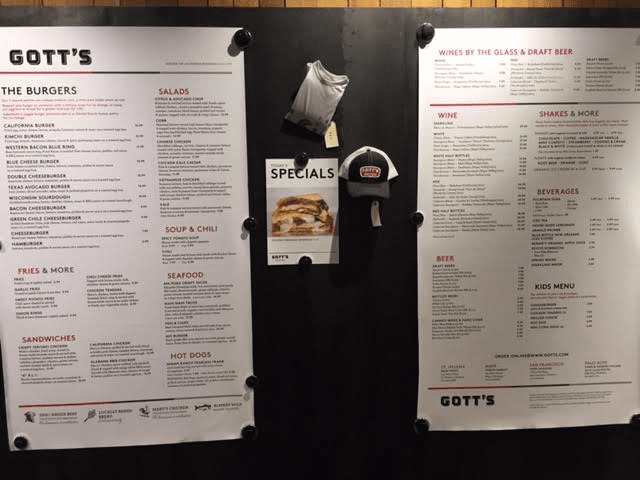 The food came in about ten minutes, which seems pretty standard for a burger joint, so no complaints there. They called us up to a pickup area at the far end of the kitchen and handed us a metal tray with our burgers and the garlic fries, each served in a little cardboard box akin to those one would find at a boardwalk, In N Out, or in one of Menlo-Atherton’s delicious, fairly-priced, and exotic lunches. I folded the brown paper wrapping off of my burger and ecstatically took a bite. Everything was just as good as I had hoped it to be, if not better. The sharpness of the blue cheese and 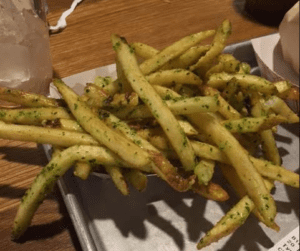 The large serving of garlic fries was as tasty as it was beautiful. Credit: Ben Strehlow / M-A Chronicle.

onions, saltiness of the bacon, the sweetness of the sauce, and savory beef melded together and burst on my tongue in a festival of flavor. I was reluctant to sip my root beer least I cleanse my palette of all the mouthwatering lingering tastes that flooded through my mouth.

Additionally, I noticed the burger was clean and tidy, a trait I credit the expertly devised fried onion ring topping for, as the additional condiments nestled neatly within the interior of the ring which resulted in a surprisingly clean eating experience, even for the sloppiest of eaters like myself. As someone who takes all my meat medium-rare when I have the choice, the medium-well patty was still quite good, albeit a bit dry (what can you expect with beef cooked medium-well, though) and I was willing to mostly overlook the restriction of choice regarding my patty’s doneness.

After wiping a smear of barbecue sauce from the corner of my lip, I set my sight on the garlic fries that, in my state of distraction brought on by an infatuation with my burger, Jasper had mostly destroyed. I shoved a heaping handful into my mouth in a futile attempt to match Jasper’s voracity and was pleasantly surprised with how good they were. The potatoes themselves were perfectly cooked and each one was perfectly coated with a light film of garlic-y butter. It wasn’t as overwhelming as the fries sold at baseball games which are often topped with comically large mounds of garlic distributed unevenly among them. Before I knew it, the tray was clean as a whistle and I was gulping the last generous mouthful of root beer down.

When my burger arrived, my post-nap hunger was starting to kick in. As I hadn’t eaten since the previous day (having slept through both breakfast and lunch), I was ravenous, and the burger couldn’t come fast enough. I had ordered a “Texas Avocado” burger, which boasted pepper jack, my favorite cheese, over a patty topped with salsa, avocado, and jalapeños. I have already covered my aversion to spicy food; suffice it to say that I can just about handle Spicy Cheetos with a couple of cups of milk to wash them down. I was once bet twenty dollars to eat a single slice of jalapeño, and I forfeited approximately three seconds after the scent – not the taste – of the pepper hit my nose. I took some flak from Ben, for ordering a “Texas” burger sans spice, but it was worth it to preserve my taste buds. 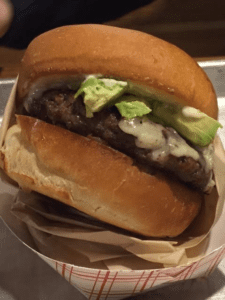 My burger, to put it bluntly, was disappointing. Maybe it was the fact that I hadn’t eaten in a day; maybe Ben was right and I should have left the jalapeños on. Whatever it was, my burger seemed nothing more than mediocre. For the eleven dollars that it cost, I expected more. It wasn’t small, exactly, but it definitely seemed less hefty than a Five Guys or Jeffrey’s burger, both of which cost significantly less. The patty was pretty good, though a little overcooked for my taste, although I do admit that I prefer meat in general and burgers in particular probably less cooked than they should be. Still, the fact that they didn’t offer an option for rarer patties didn’t help.

The bun was really good, an incredibly firm and puffy bread that wasn’t all soggy or floppy. It stayed crisp and delicious from the first bite to the last. But everything else about it was… unremarkable. The patty was okay, the avocado bland, the cheese unmemorable. I finished my burger in a couple of minutes before Ben even got his. My burger did seem significantly smaller than his, perhaps because I got different toppings, so maybe other For six or seven dollars, I’d count this a good meal, and move on. For eleven, I think it’s overpriced and mediocre. No particular element, aside from the bun, stood out as particularly noteworthy, for better or for worse, and I just can’t recommend Gott’s, or at least the Texas Avocado burger that I had, in good conscience. I rate it a 2.5/5.

Overall, the meal was excellent on almost all fronts, although I was still a bit let down by the mandatory medium-well patty. Despite that, the burger as a cohesive creation was extraordinary, and the garlic fries went far above and beyond my expectations. In regards to price, it was a bit on the expensive side for what you get, with my entire meal consisting of an admittedly gourmet burger, drink, and half an order of fries running me about eighteen dollars. That said, for those better at resisting their indulgences who can settle for a simple but equally delectable hamburger and a plain order of fries, the cost of a traditional “meal” would be closer to twelve dollars, which is pretty reasonable. Gott’s Roadside is a solid 4.5/5. The restaurant provides an excellent and reasonably-priced take on classic American comfort food, with a relatively concise menu offering diverse options for diners, from burgers and hot dogs to salads and seafood. The atmosphere is comfortable and traditional, and the exposed kitchen design only enforces the personalized, home-cooked sentiments surrounding the foods which diners strive to find in restaurants specializing in classic comfort food.