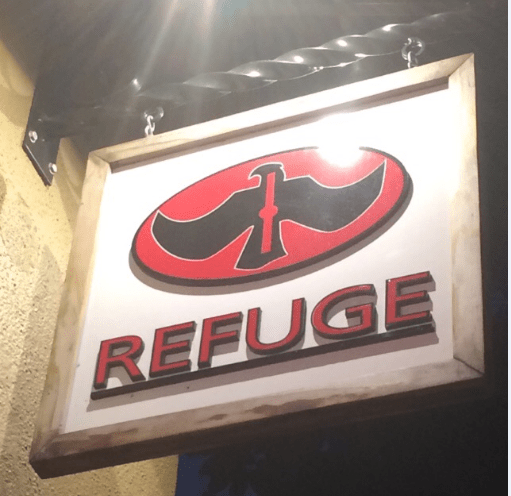 It was just an average Tuesday night. The clock had just hit 1 a.m. and I was just starting another episode of Anthony Bourdain: No Reservations before beginning my homework. As the show wrapped up, I finally got around to unzipping my backpack to begin that night’s workload, ripping a sheet of binder paper out of my Government notebook to use for brainstorming ideas for a journalism article. Then it hit me – why not combine my love of food and writing into a bi-monthly series where I ventured around the Bay Area, visiting diverse neighborhoods and eating at local restaurants? I could sample the best dishes that each restaurant had to offer, writing reviews and sharing them with the Bear community.

I needed a partner, so I called up my friend Jasper, the only person I knew who loves to eat as much as I do and my frequent partner on countless midnight journeys to In-N-Out and Chuck’s Donuts. Even though it was already 2 a.m., he answered instantly, and I pitched the idea. Jasper loved it, and we decided that naturally, we should begin our series locally. After a brief discussion, we settled on The Refuge, a local pub known for its delicious pastrami and wide selection of craft brews. Menlo Park’s Refuge opened its doors in June of 2013, an expansion from its original San Carlos location. Just three years later, it has rapidly become one of the most popular restaurants in downtown Menlo Park, packed every night with hordes of food-lovers and craft beer aficionados alike. The next Wednesday we set out at 7:30, eager to take the first step on our culinary adventure.

Jasper: Ironically, we got lost on the way to The Refuge. Tucked unassumingly between no less than four beauty salons, it was far and away the most popular business on the block on a Wednesday night. Ten minutes and more shouting at our phones than I would care to admit later, Ben and I finally stumbled across six welcome letters: Refuge. By the time we entered the restaurant, it was already bustling with activity. The Refuge lived up to its name – while the weather of Menlo Park hardly demanded refuge, the snug orange glow of the lighting and the companionable chatter of its patrons still made for a warmly comfortable ambiance. Unfortunately, by the time we had arrived, the restaurant was full, so we ended up sitting outside, where the warmth of two outdoor flame lamps carried the homey atmosphere outside to accompany us. 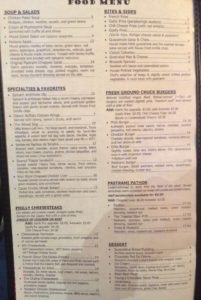 Ben: The waiter brought out our menus and the dilemma of what to order began as soon as we started to browse over the countless mouthwatering options, from the Refuge’s famous pastrami sandwich to its original take on a hearty American classic, the Philly cheesesteak. After a short debate, Jasper opted for the cheesesteak while I combined my love of hamburgers and lust for delicious pastrami into my decision – a pastrami burger. With a disturbing lack of concern for our health, we decided to split an order of The Refuge’s special creation, “goofy fries,” a plate of savory garlic fries bathed in melted cheese and heaped high with shredded pastrami. To wash it all down, both of us ordered a house-made black cherry soda to satisfy our sweet tooths. With the fire crackling behind us, we reclined in our seats and prepared for the hardest part of our night – waiting for the food to arrive.

Jasper: But the wait was well-worth it. Our server brought out the food, three lavish platters of assorted fries, a 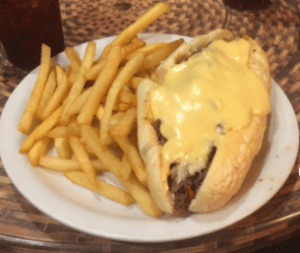 pastrami burger, and a cheesesteak. My cheesesteak, drizzled in The Refuge’s own special melted cheese sauce, was stuffed so full with a mouthwatering mix of onions, cherry peppers, and beef that it was hard to take the first bite without smearing my entire face with the cheesy concoction. When I finally accomplished this herculean task— which, I’m proud to say, resulted in only a couple of ounces of cheese sauce on my clothing and face— the rest of the cheesesteak was soon to follow. Technically, it was cut into two distinct pieces, but with the cheese essentially gluing it together, it was basically one sandwich. The meat was juicy and the cheddar cheese slathered on with an artery-clogging liberty. And at $12, while not a particularly cheap meal, this cheesesteak won’t break the bank.

Ben: While Jasper focused on his cheesesteak, I had my own battle ahead of me in the form of the Goliath which was my pastrami burger. From the beautifully toasted golden-brown bun to the carefully cooked beef patty topped with bubbling Swiss cheese, sauerkraut, and of course, sliced pastrami, the burger was truly a sight to behold. My first bite was an eruption of flavors bursting within my mouth as the juicy beef and nutty Swiss cheese mixture danced a waltz on my palate with the potently salty pastrami as the powerful acidic punch of the sauerkraut kept time. Not a single morsel of the burger escaped me. As tender pieces of pastrami slices and cheesy beef fell from the burger, I voraciously gobbled them up before they could even touch the plate and washed every tidbit down with a sip of refreshing black cherry soda. After polishing off my burger, I set my sights on the goofy fries, best eaten with a fork using the same technique one would use to eat animal style fries, another California favorite. The Refuge’s signature cheese sauce graciously coated each fry, and with each bite hints of garlic and pastrami snuck onto my tongue. For an admittedly hefty price tag of $17.50, the Refuge does not skimp on quality nor quantity – this masterpiece of a burger is jam-packed with ingredients and flavors that, while so different, work perfectly together, and upgrading the complementary fries served on the side to goofy fries is a surefire method to assure that the succulent meal does not end even when the last bite of burger is finished. A Reuben expertly transformed into the beloved classic American hamburger, this meal is a must-have for Reuben lovers and adventurous eaters alike. 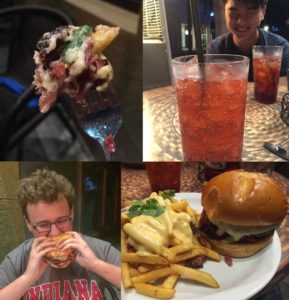 Ben and Jasper enjoy their meals.

Jasper: Though Ben and I were more than full, we decided to splurge on desserts. After a brief argument about whether to get the “Superlative Bread Pudding” or the irresistibly named “Chocolate Pot de Creme,” the combination of a mild food coma and poor impulse control on both of our parts led us to purchase both. The bread pudding, about the size of an outstretched hand, arrived with a generous serving of whipped cream and a steaming tub of bourbon caramel. After we discovered that the both of us were, in fact, still hungry, we unceremoniously dumped both the whipped cream and the caramel over the bread pudding and went at it. It was actually the first time I had ever tried bread pudding, so I’m afraid that I’ll be forever spoiled, but it was delicious. As I dug my fork into it, it crumbled with an incredibly satisfying consistency, softened just enough by the caramel to almost fall apart into bite-sized chunks. It disappeared in under a minute before we turned our attention to the “Chocolate Pot.” 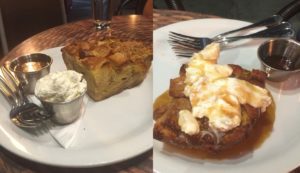 The Refuge serves bread pudding with whipped cream and caramel.

The “Chocolate Pot” (how could I not get something called a “Chocolate Pot”?) was much smaller. It was a thick chocolate custard, fudge almost, topped again with a dollop of whipped cream. It was also quite good, though not nearly as memorable as the bread pudding. It wasn’t as sweet as I expected, with just a hint of an orange in its taste, but that may have been because I had just consumed about a pint of caramel with my bread pudding. The desserts were a bit on the pricey side, especially compared to the price of my entree; the bread pudding, at $8, and the chocolate pot, at $3, ended up costing almost as much as my cheesesteak. If you have the money to spend, however, I could not recommend these desserts more. 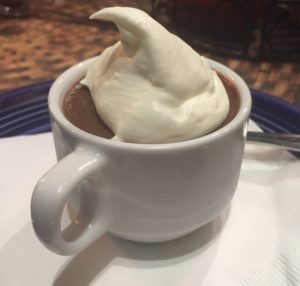 Ben: As the waiters came to collect our plates, I noticed that we had meticulously licked them so spotless that on first glance they might even appear unused. I let out my belt a couple notches to give my significantly larger gut some space to breathe as it got acquainted with the admittedly unhealthy amounts of food I had just devoured. When the check arrived it was hard to ignore the high price of our feast, however in the spirit of food-reviewing the two of us had gone all out on this meal – for most normal people who have concern for their health and refrain from eating excessively, the cost of a dinner here should be significantly less. With that said, I strongly encourage anyone eating here to embrace their inner hedonistic desires and venture to taste anything that catches his or her eye – after all, there are only so many meals like this in a lifetime, so why not make the most of it? Whether a longtime Bay Area local or simply a tourist or visitor, The Refuge is a must-try dining experience, combining a homey atmosphere with hearty and filling food fit for even the most gluttonous of diners – just remember to go to the bank first. With no reservations, both Jasper and myself confidently award The Refuge in Menlo Park a full five stars. 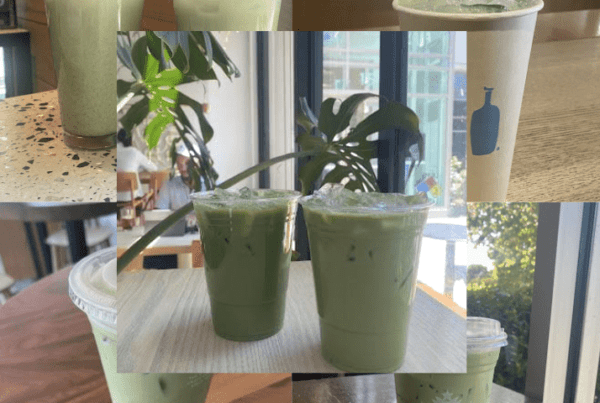