All photo credit to Anna Quinlan.

Today on M-A Today, U.S. Congresswoman Anna Eshoo awarded senior Anna Quinlan after winning the Congressional App Challenge. This challenge was advertised nationwide in hopes of inspiring students to code and transform how Congress views computer science and STEM. In 2017, there were submissions from 42 states and territories. 225 members of Congress hosted challenges in their districts, and of those members, roughly half were Republicans and half were Democrats — a testament to how bipartisan coding and computer science are. 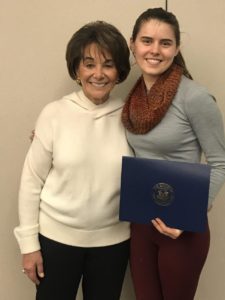 Quinlan heard about this challenge from Cindy Donaldson, computer science teacher at M-A, during a regular third period class. She announced the opportunity to everyone and Quinlan decided to look more into it. “I… had this project already and I basically just re-entered it. I have been working on my insulin pump since the summer before junior year. I heard about [the challenge] from Mrs. Donaldson, and then I just thought, my project could conceivably be called an application. I did code the thing, so why not enter it!”

Anna Quinlan’s app, A Smarter Insulin Pump, was inspired by a friend’s complaints about how her pump could deliver insulin, but could not prevent low glucose. She sought to design a smarter, more affordable, and user-friendly insulin pump with helpful functions like a texting feature to make managing the symptoms of diabetes easier.

When asked about her knowledge on the app challenge being “the most prestigious prize in student computer science,” she said, “What? I had no clue! I just applied on a whim.” Quinlan also taught herself to code through Codeacademy and said, “I didn’t know how to code. I learned by doing. It’s also definitely a process. I learned about stuff that I shouldn’t have been doing, or that weren’t the world’s best coding practices.” She worked through trial and error, eventually arriving at her current design. 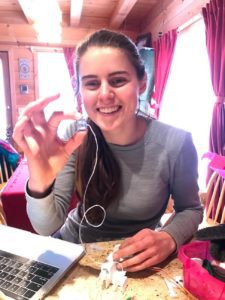 Quinlan working on her design that she 3D printed at her local library.

She was presented the award by Congresswoman Anna Eshoo, who helped launch a bipartisan effort in Congress to inspire high school students across our country to engage in STEM, coding, and computer science education. She noted that Quinlan’s app will be “prominently displayed at the U.S. Capitol and on the House of Representatives website for a full year. Millions of visitors come through the Capitol every year, and even more visit the website.”

Quinlan will also win $250 in Amazon Web Services promotional credits and receive a travel voucher from Southwest airlines to go to Washington D.C. in the spring of next year to attend a reception hosted by the Internet Education Foundation and the Congressional App Challenge.

Apps are judged based on the following criteria: quality of the idea – including creativity and originality; implementation of the idea – such as user experience and design; and demonstrated excellence of coding and programming skills. 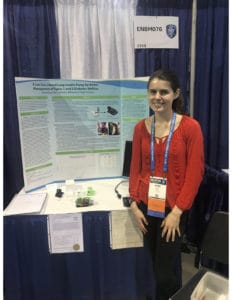 Quinlan with her closed loop insulin pump at the Intel ISEF.

Other participants from M-A had the opportunity to meet Eshoo as well. Senior Blake Sanie entered an app called Across the Aisle, which unites a politically divided America through discussions. Sara Osterberg, Alison Snyder, and Bridget Patrick’s app HealthTime! suggests personalized workouts based on one’s height, weight, gender, and age. John Giambruno, the video streaming teacher, also described how Eshoo was thankful for schools like M-A.  “She made me feel like I inspired her,” said Giambruno.

Quinlan’s submission, along with the countless other applications, “change lives, change minds, and advance innovation,” said Eshoo. According to Quinlan, “by bringing these kinds of things to market, you improve people’s qualities of life.”