America to Me: The Six O’Clock Class on Race

Hoping to encourage dialogues about race at M-A, history teachers Corinna Ott, Anne Olson, and Stephanie Cuff-Alvarado invited their students to attend screenings of America to Me with them. The 2018 docu-series follows a group of racially diverse students over the course of a school year and aims to catalyze conversations about race in schools.

The free screening and speaker series, hosted at the Stanford Graduate School of Education, is open to the public and led by Jessica Stovall, an English teacher in the docu-series who has since become a PhD student at Stanford University.

In seeing the lack of experience students in her classes have talking about race, Ott chose to offer extra credit to students who attended, and a large number have elected to do so. “While many acknowledged that they were initially going for the extra credit, they’ve been blown away by the film and the speakers who have come each week, and have committed to coming beyond the extra credit incentive.” 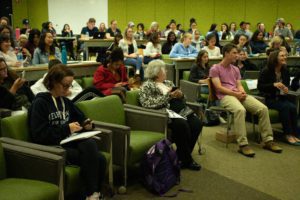 Attendees of all ages take their seats before the class starts

“I think M-A has a hard time talking about issues pertaining to race/racism and inequality at all levels, and I’ve had a hard time discerning how to have these conversations with my students and other staff members as a new teacher.”

As a teacher, Ott believes that it is particularly important to lean into the discomfort of talking about race and racism, stating that “if teachers and administration cannot model and have these honest discussions with one another, then we can’t adequately model this for our students.”

Ott stated that “this series provides an important platform for everyone to engage in these issues, and start important conversations about racism, white supremacy, and inequalities in education.”

History and gender studies teacher Olson has also attended the class and extended the invitation to her students. Olson decided to “invite all of [her] students because race affects us all. So whether it’s what the class is talking about or not, it’s always there…and really important.”

Senior Symone Price said that after watching a clip of the series in class, she was interested in attending, “even before [Olson] said that going would count [for credit].”

She stated that discussions about race are important because “people think that they can overlook race when sometimes it should be applied.” Price further said that because “we expect to be treated equally as [our] white peers from [our] white teachers, seeing students speak up in the series was personally “very powerful and inspiring” and she “wished [she] could be more like that.”

Jayla Hill, also a senior, “decided to go because [she] was super interested after [Olson] previewed it in class” and she “wanted to see the stories progress.” One scene that left an impression on her was when a white teacher tried so hard to appear cool and not racist that he was blind to students’ discomfort, “and it was so in your face that it was hard to ignore at some points.” After only one student spoke up, Hill questioned why other students “chose not to say anything about it,” regardless of their skin color.

Olson thinks “the reason why we are so interested in America to Me is that we saw so many direct parallels” between Oak Park River Forest High School (OPRFHS) and M-A. “The conversations are so important, because we see inequities every single day, and in every single classroom, because we live in an inequitable society.”

After discovering the series at a professional development workshop at the Museum of Tolerance in February, Ott heard about the class from Stovall’s Instagram and invited her close coworkers. She says that she “was immediately excited to go,” especially because of the similarities between the high school in the series, OPRFHS, and M-A. 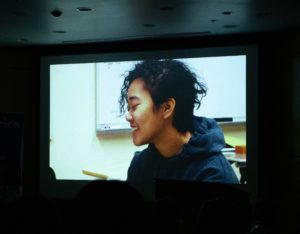 OPRFHS student Chanti on the screen during Episode Eight

While OPRFHS is located outside of Chicago and its student body is largely white and black, tensions from racially biased systems permeate the school climate; the demographic percentages are roughly like those of M-A, if the Latinx portion of M-A were switched for the black portion of OPRFHS.

Ott stressed the importance of racial literacy for everyone, and that conversation is “the first step in dismantling racist structures and the white supremacist society we live in.” Elaborating, Ott said that “we will never be able to progress” if we do not have “honest and open discussions about how our nation has continually failed” people of color.

Olson and Ott hope to learn and grow from the series, and Olson stated that she is “only becoming a better teacher because of it” by learning better ways to handle in-class tensions and facilitate productive discussions, and is becoming “even more cognizant of race and systemic inequity.”

She believes that her students are open and willing to have these conversations, since when she “talks about race in the classroom, a lot of [her] students will stay back after the bell rings and want to continue the conversation.”

Beyond their personal growth, both Ott and Olson aim to implement the series itself and what they’ve learned into their curriculums next year.

Ott said that as a white-passing woman of color, she has “a large amount of responsibility to advocate for BIPOC and use the privilege [she has] been granted to make sure their voices are heard.” Having experienced cultural erasure in her own education, Ott aims to do the opposite for her students, and works to “create a culturally responsive curriculum that reflects the backgrounds and stories of BIPOC throughout history.”

Ott said that “as a teacher, it is my duty to educate all my students around topics of racial literacy, even if it’s difficult or uncomfortable, and it’s something that I will do for as long as I’m in the classroom and probably beyond.” With the wealth of available information, Ott stated that “there’s really no excuse to be racially illiterate, and it’s certainly not a ‘one and done’ deal, either.”

Both teachers also aim to initiate conversations in the school at large, and have begun speaking to admin about these issues. They said that the most enthusiastic response they have gotten was from Janelle Bugarini. Olson says that “[Bugarini] went home and binge-watched the series and came to talk to us about it.”

While other administrators have “been less open and supportive about it,” according to Ott, they look to the future with hope.

There are two more classes in the series: episodes nine and ten on June 3rd and 10th, respectively. Interested parties can sign up to attend online.