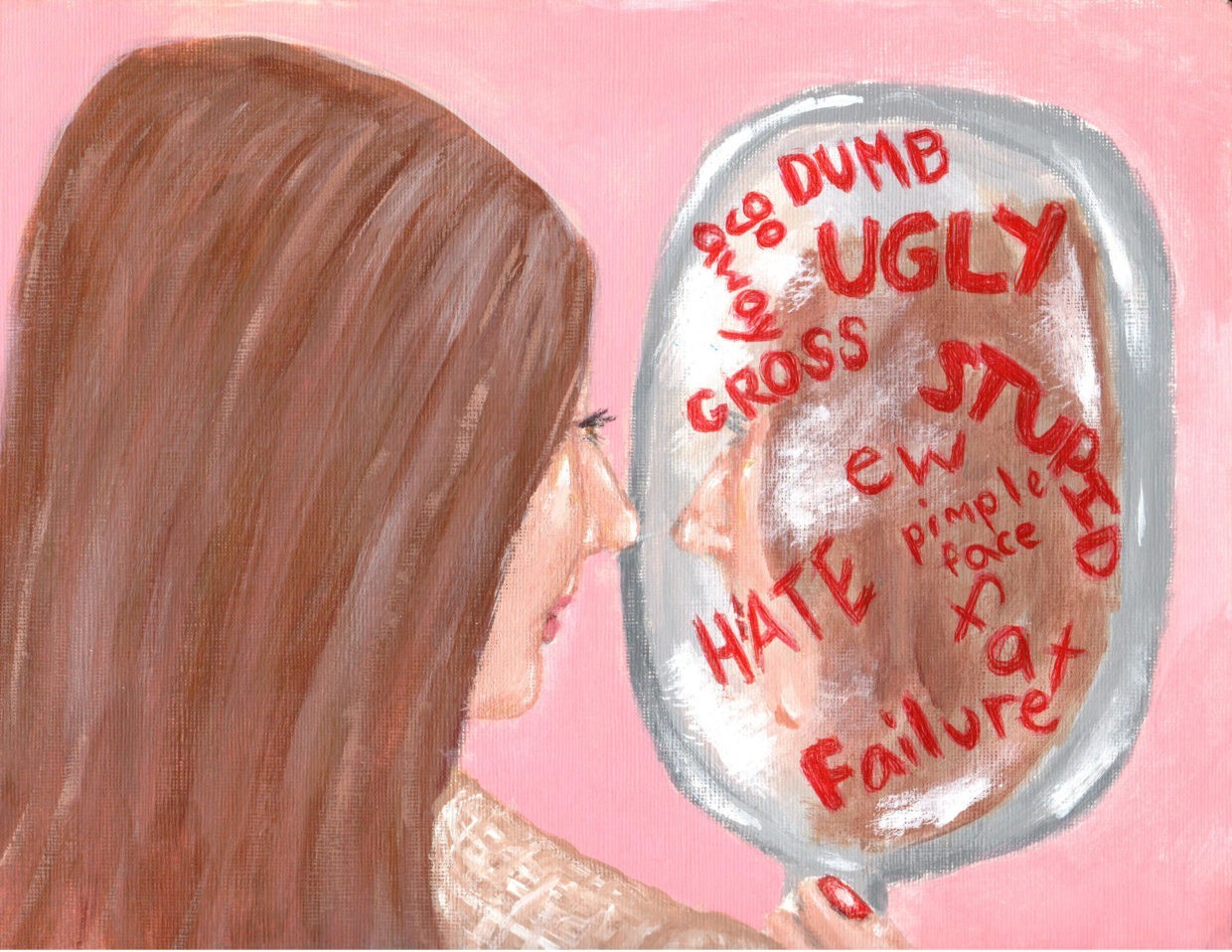 According to the American Academy of Dermatology, up to 50 million Americans are affected by acne every year. There are three types of acne: mild, moderate, and severe. Around 85 percent of people between the ages of 12 and 24 experience at least minor acne.

Two students shared their stories about their acne, courses of treatment, and the toll it took on their self-image.

Dena Hamidi, a junior at M-A, took a rigorous treatment called Isotretinoin, more commonly known as Accutane, to treat her acne. Hamidi started getting acne when she was in the fifth grade. It started off just as back acne but became severe the first two years of high school.

Because her acne was hormonal, her face, back, and neck were constantly in pain. Hamidi went to her dermatologist, who prescribed her Accutane halfway through her sophomore year.

Accutane is a powerful drug taken orally that reduces oil production and in most patients, permanently gets rid of acne. According to the American Academy of Dermatology, acne will ameliorate in about 85 percent of patients after one course of treatment, which is four to six months. This treatment is known to have a variety of side effects, the most common ones being dryness, headaches, depression, and liver damage. It can also cause serious birth defects or miscarriage if taken during pregnancy. Because of these side effects, dermatologists administer monthly blood tests to all patients taking the drug. Patients must also have acne that qualifies as “bad enough” in order to avoid these risks.

While she was taking Isotretinoin, Hamidi suffered from occasional nose bleeds, mood swings, depression, aggression, dry lips and skin, constipation, and a small amount of liver damage. Although she experienced difficult side effects, Hamidi believes her Accutane journey was “100% worth it.”

She admitted acne had a very harmful effect on her self-esteem and mental health.

She often felt as though her skin labeled her as unattractive. Looking back at when she still had acne, she remembers thinking: “Why do I have to be the one with acne? Do people actually think I’m ‘dirty’ because I have acne?”

No matter how much she would cleanse and moisturize her skin, Hamidi’s complexion would never change. This was especially frustrating when people asked her if she had even tried washing her face.

Hamidi also recalled the difficulty she had picking what clothes to buy and wear. She said, “When it came to my outfit of the day, I’d contemplate between settling for a jacket or wearing a v-neck. I was hoping to go through my sophomore year without being seen with acne on my chest and back.”

She also felt like hiding her face in public, feeling ashamed when people not-so-subtly stared at her acne. “Almost every conversation I had consisted of the other person’s eyes wandering off to my cheeks and my chin.”

Fortunately, she believes that the majority of the people she talked to were nice enough not say anything terrible about her acne, but remembers one instance where a boy told her she had “gross a— acne,” which was devastating to Hamidi’s self-image.

She remembered waking up in the mornings and taking a good look in the mirror, thinking to herself, “Is it really worth going out looking like this?” Hamidi confessed that she declined invitations to go out because she was too self-conscious.

During her sophomore year, Hamidi wore more makeup than usual. She felt as though if she “packed on foundation, maybe people wouldn’t notice how bad [her] acne actually was.” She described this approach as ineffective; at the end of the day, she would still feel ashamed about her skin.

While Hamidi’s acne has fully cleared up, she still has acne scars and craters (large, deep, pit-like scars). After her experience with acne, she feels the need to put on foundation everywhere she goes to “give [herself] and others the illusion that [she] has ‘perfect’ skin.” In addition, she has visible acne scars on her chest, which leads her to choose clothes, like sweatshirts, that do not expose them.

Although she has scars that remind her of her journey with acne, Hamidi feels much happier after the treatment cleared her skin. She has more motivation to talk to students as she has become less self-conscious. Hamidi is pleased by how much more eye contact she makes with people she talks to.

Hamidi feels as though she can now sympathize with those who had acne or are currently dealing with it. Her experience helped her realize that acne may seem like a small issue, but it can severely damage one’s self-esteem. 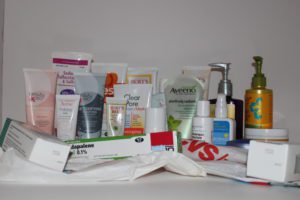 “Haven’t you tried washing your face?”

Sara Madsen, another junior at M-A, had mostly moderate acne but experienced some breakouts that qualified as severe. She decided to treat her acne in a less invasive way, preferring to take antibiotics rather than risk the side effects of Accutane.

Madsen had acne since the seventh grade. In middle school, she often felt isolated since everyone around her had clear skin and no one could relate to her situation. After a year of trying to treat her acne through over-the-counter creams and face washes, she went to a dermatologist, who prescribed Tretinoin. Tretinoin is a nightly cream that makes the top layer of a person’s skin regenerate faster. The cream made her skin very susceptible to sunburns and gave her dry, patchy spots, which would sometimes flake or peel off. “But it helped with the pimples, so I decided to stick with it,” Madsen explained.

Halfway through Madsen’s freshman year, the Tretinoin cream stopped working. She returned to her dermatologist, who then prescribed a series of oral antibiotics called Doxycycline. After taking these for thirty days, she stopped. For a couple of months her skin was a lot clearer, but then her acne returned. Madsen was unable to see her dermatologist around this time due to her family switching insurance plans.

Madsen decided to do some research of her own about the causes and treatments of acne. The internet said that the main causes of acne were hormones, stress, and unhealthy eating. She then wondered if her diet was the cause of her skin problems.

Madsen lives in a single parent household, therefore most of her dinners consisted of pizza and freezer food. She started her new diet by cutting out dairy, seeing as dairy was reportedly a cause of acne. When her skin did not change, she stopped eating processed foods. This approach didn’t work either, so she says she tried to go “full-on paleo.”

Food in the Paleolithic diet is very expensive, so most days Madsen ate almost nothing. This habit led to extreme hunger, which caused “junk food binges and more stress and more acne.”

Looking back, she realizes that her “attempts to fix [her] acne were not only counterproductive but also caused an array of other problems and eating disorders that were far worse than pimples.”

After recovering from her eating disorder, Madsen started taking antibiotics again in the summer before junior year. She chose not to go on Accutane, although she qualified for it due to her severe breakouts.

Madsen believes that people don’t realize how depressing acne can be. She explained that in her case, her acne was horrible to her self-esteem. It got to the point where she “never turned the lights on in the bathroom because [she] couldn’t stand to see [her] acne in the mirror.”

She admitted that during her worst breakouts, when her acne was considered severe, she did everything possible to try to hide it. Madsen recalled, “I would avoid pictures at all costs. I grew out my hair and used it to hide my face. I wore loads of makeup, and hated how oily and cakey my skin felt by the end of the day.”

Madsen said that she wouldn’t dare leave her house without makeup for almost three years. The only two people who saw her without makeup were her dad and her brother. “When people came over, even if it was a close friend, I locked myself in the bathroom for five minutes to slap on whatever foundation and concealer I could before coming out to say hello.”

Now, she has some scarring, which she continues to hide with makeup. Madsen feels it is no surprise to her that she is insecure about her scars. “I can’t love my scars, but what I can do is let them just be my scars. They don’t have to trigger self-hatred.”

She feels very lucky that no one ever bullied her for having acne. However, when she had bad breakouts, she noticed people would stare at her, which made her very self-conscious in public. Despite this difficulty, she came to a new understanding: “The reality is, other people don’t care what your skin looks like nearly as much as you do.”

Madsen admitted that for a long time, acne controlled her life. For example, she “avoided pool parties like the plague.” Reflecting upon her experience, she realized, “What’s worse than acne is allowing something as silly as your skin dictate the way you live your life.” She believes acne gave her a new perspective on skin and beauty, while also teaching her not to judge other people for their imperfections.

Madsen observed that “when [she] stopped worrying about [her] acne, a lot of it went away.”

Madsen still experiences some acne but claimed it is nothing compared to what she experienced before. She said that having less acne has undeniably improved her self-image. “It’s sad to say that acne was holding me back from loving myself, but it was. And on the bright side, no matter how badly you suffer from acne as a teenager, it’s going to get better.”