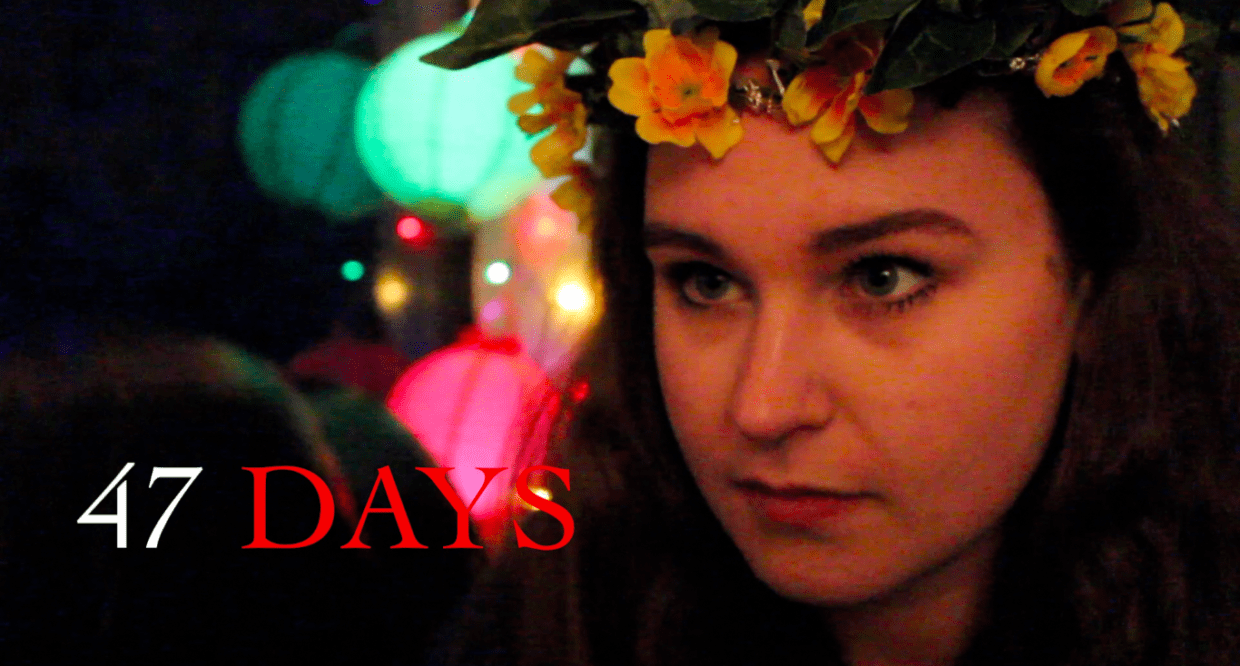 This past Saturday, April 29, junior Lena Reibstein premiered her first full-length film, “47 Days,” from 8 p.m. to 10 p.m. on the green. Attendance was free but proceeds from the suggested donation of five dollars went to the American Cancer Society, part of Reibstein’s initiative as president of the M-A American Cancer Society Club (ACSC) to raise money and awareness. 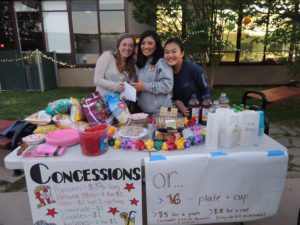 Proceeds from the concession stand also went to the ACSC.

The atmosphere on the green was laid back and amiable; as the sun set, people milled about, setting out blankets and chatting. Multicolored Christmas lights were strung around the edges of the green, and a large projector screen was set up on the stage.

It was clear that the crowd was incredibly excited and supportive of Reibstein. Once the sky darkened, she stepped up to introduce the film, and the audience erupted in applause. Cheers ensued again as the movie started, and a video of a young Reibstein dancing appeared on the screen, the words “Little Girl Film Studios” flickering next to it. The audience remained engaged throughout the film, laughing, cheering, and falling silent at all the right times. “It was so good!” yelled one audience member after the applause following the film died down. 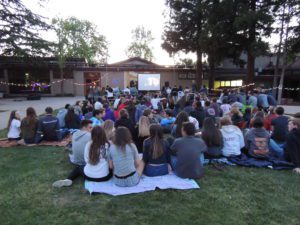 Students gather in front of the screen, waiting for the movie to start.

“47 Days” traces the lives, relationships, and personal struggles of eleven students in a high school production of “A Midsummer Night’s Dream.” The whimsical Shakespeare classic serves as a backdrop for the more complex interactions of the characters, as they grapple with heavy topics like bulimia, alcoholism, financial instability, bullying, and sexual assault. At the same time, their unique yet relatable personalities bring an uplifting, heartwarming tone to the overarching narrative.

Filmmaking has been a passion of Reibstein’s her entire life, but it was not until recently that it became such a fixture. “I can tell you a distinct moment when I realized that this was going to be a thing,” she recalled.

Up until sophomore year, Reibstein’s main extracurricular was theater; it was on the opening night of M-A’s musical “Into the Woods” last year that she had the idea for her first real film, a documentary to submit to M-A’s film festival about what different religions think comes after death. “I was a stepsister, so I had this huge, giant pink fluffy costume on, I had a wig, I had high heels on, and… it was like five minutes before the show started,” Reibstein recounted. “I sprinted down in my dress, my costume is flailing… and I texted [my friend] Kelsey like ‘Kelsey I have an idea for the film festival!’ And that’s how my film career started.”

Since then, Reibstein has made a few short films, but she first had the idea to create a full-length film during the summer. “[I] started writing the day after that,” she said.

Working two jobs over the summer, she saved up enough money for a camera and a laptop. “I was so eager to use [the camera] that I didn’t have people or anything, I had one page of the script, and I just started filming anything that I could,” Reibstein related. “So I have a lot of videos of my dad being annoyed.”

“I definitely taught myself how to use the camera intuitively,” she added.

Reibstein completed her first draft of the script by Thanksgiving and revised until winter break. She gathered a cast and did the bulk of the filming during break. Junior Sara Madsen played the role of Allie, one of the main eleven characters, and was impressed by the cast’s dedication. “We would come every day during break and just film all day, and it was really cool how much everyone cared about the project,” Madsen remarked.

Reibstein was still shooting some scenes until last weekend. “There’s 20 people in the cast, and it’s really really hard to schedule that when there’s so many conflicts,” Reibstein admitted.

However, she added that, “honestly even that wasn’t really hard… it was just fun!” 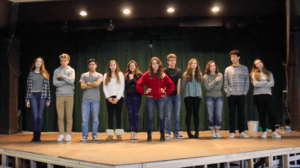 The main cast consisted entirely of M-A students, an intentional choice. “I made this film specifically for people at this school,” Reibstein remarked. “It’s for M-A kids, it’s made by M-A kids.”

It follows that Reibstein’s inspiration for “47 Days” stemmed from real life experiences and people she knows. “Really it’s just based on people… the inspiration was just watching people interact; it’s so incredible seeing how people affect each other’s lives,” Reibstein explained.

Madsen observed how Reibstein “touches on all kinds of problems she hasn’t experienced herself, and it’s just amazing how much insight she can have on these issues that don’t affect her directly.”

However, Reibstein did have plenty of outside help. She participates in James Franco’s film academy, which Reibstein says helps her develop filmmaking skills, particularly writing. Junior Shane Turner composed an original score for the film, and other friends helped her develop ideas, and do makeup and special effects. “Things that I can’t do,” she laughed.

She also added emphatically, “Take care of your actors! It’s really important. I have a policy called ‘Director Sympathy’ where I do everything my actors do.” 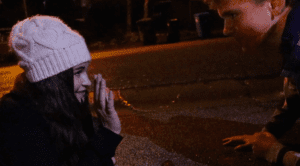 A still from when blood capsules were used behind the scenes.

One example of Reibstein’s dedication to this policy happened while shooting a scene where Isaac (played by sophomore Thomas Sullivan) bumps into Irene (junior Kate Mulhern) and falls and chips his tooth. While the scene ultimately didn’t make it into the film, while shooting it, Sullivan had to use a blood capsule in his mouth, so Reibstein did the same.

“It was pouring rain, and I sat in a puddle of mud and water — in these jeans actually — and I bit into a blood capsule [to do the same thing as Sullivan],” she laughed. Reibstein was wearing white jeans the day of our interview.

Freshman Francesca Battista was one of the initial contributors to “47 Days”, helping Reibstein develop the script in its early stages, and also acted in the film as Ari, the older sister of Isaac. Battista told another story of ‘Director Sympathy,’ where she had to use menthol strips to irritate her eyes to help her cry for a scene, and Reibstein did the same. “We both put it under our eyes like war paint, and she was over here like ‘OH OKAY’ and like fanning her face for a little bit; she was like ‘how do you get this off?’” Battista laughed. 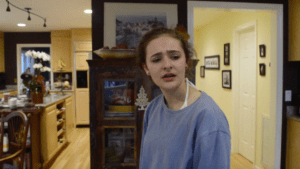 Battista, during the scene where she had to use menthol sticks.

Junior Zoe Schacter-Brodie, who played Miranda in the film, said of Reibstein’s directing: “I think she felt weird giving us notes and critiques [at first but] she did a really good job.”

This project was also deeply personal for Reibstein. Originally, the film was supposed to be centered a lot more on the theater aspect of the story. Yet as she wrote the script, Reibstein began to realize that the characters represented a lot more. “I was writing eleven different sides of who I was. Each character is a different part of who I am,” she explained. “They started to be symbolistic figures of a certain theme.”

Naturally, sharing something so meaningful can be scary. “[The audience] won’t know, but it is who I am… and just presenting that to someone — to a bunch of people — is terrifying,” Reibstein confessed beforehand.

“But that’s why I love filmmaking because you can do it in creative ways… It’s why you do it, you know?” she finished with a smile. 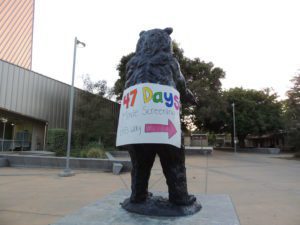 A poster pointing viewers towards the green.

Now that “47 Days” is out there, these fears have been assuaged by the overwhelmingly positive response from the community. Overcome with emotion, Reibstein struggled to verbalize her feelings after the screening: “[It’s just] unbelievable. I can’t put it into words, I’m so lucky and grateful to have these amazing people in my life… just unspeakable.”

“It’s just so incredible to see it all pay off and see it all come together,” Battista gushed.

The biggest source of pride for Reibstein is the entire team that worked so hard to create the film. “I’m most proud of the people. I’m proud of them for being so amazing. I’m proud that I can be like, ‘this is what we did, together,’” she explained.

Schacter-Brodie was similarly appreciative of the connections she made with the rest of the cast. “I got to meet and bond with [new people] and it was a community of all of us,” she commented.

Perhaps what’s most remarkable about the film is the unadulterated passion which Reibstein poured into the project. Through her vision, dedication, and natural talent for filmmaking, Reibstein has created a tight-knit community of actors and filmmakers and brought an incredible piece of art to the M-A student body.

“She just has such a vision for what she’s working for, and she’s also willing to work with people so the vision changes, but it stays its original core idea,” Battista remarked.

For Reibstein, one of the best parts of filmmaking is that she gets to translate this vision into her own reality. Listen to her discuss this topic below. She mentions “Jessica” and “Teddy,” referencing junior Jessica Galen and senior Teddy Pagee, who played Liza and Tobias, respectively, in the film.

As the screen went black and the words “Directed by Lena Reibstein” appeared on the screen, the green erupted in cheers. The moon was bright, hovering above the horizon, and the night air was just starting to lose its warmth. The sense of community, mutual pride, and wonder at the labor of love the crowd had just witnessed was tangible. There was this awareness that this tale of insecurities and camaraderie, loss and love, and the strange joys of being young, marked the beginning of something truly special for Reibstein, a testament to her remarkable capabilities for understanding and connecting the people around her. She created this reality, and it was a beautiful one.